- January 19, 2013
The pleasantest things in the world are pleasant thoughts: and the great art of life is to have as many of them as possible.~ Montaigne


I don't think I wrote on my blog that both knees started bothering me this week. Fortunately when I awoke on Friday the pain in my right knee had gone away and the pain in the left knee was considerably reduced. I am still not back to "normal" but I am much better. I am hoping and praying for complete recovery soon as I already know the healing process is cyclical; at least where my knees are concerned. In any case, I was very grateful today!

I stayed up very late last night (early Friday morning) and finished reading "Appetite for Life", a biography of Julia Child. I would have finished sooner but the last two days have been rather busy with lots of phone calls and interruptions.

I thoroughly enjoyed the book. What most impressed me was just what a tremendous work horse, Mrs. Child was. She worked tirelessly to bring the joy of French cooking and good food to Americans.  She also worked until  near the end of her life:  keeping constantly busy with writing, cooking, and making cooking television shows as well as her charitable and other educational interests.  Another thing that impressed me was her devotion to her husband;  in fact, their devotion to one another really touched me. Julia Child and her husband Paul were fully devoted to one another and they supported one another throughout every stage of their lives.  It was also surprising to me just how much moving around Julia did before and after her marriage and how many different jobs she had before she become a French cook. She lived in many different places in California, Massachusetts, India, China, France and Norway.  When she married, she and her husband had several homes on both coasts in USA.  They also had a home in France where they spent as much time as possible. They travelled a lot and socialized a lot throughout their marriage.  Julia's non-stop energy for work and socializing was noted by all around her.  All in all, she led a fascinating life.

I made some ham and lentil soup on Friday evening.  You might say I was inspired by Julia Child, but I've always loved a hot bowl of hearty soup on a winter's evening.  Yesterday was also grocery shopping day so I had all kinds of veggies to use (onions, carrots, celery, potatoes) and left over ham from the ham roast made the day before.  I also had a bit of bannock bread (whole wheat and white)  left over from the day before to round out the meal. I never got round to eating the strawberries for dessert and saved them instead for a late night snack.


I did a lot of  window shopping (the internet version). I made myself tired looking for boutis work, flannel sheets, and pendleton blankets. I  think I better give that a rest for awhile since I don't plan on buying any of these items anytime soon. I also spent time sourcing some very large containers for dry goods storage. I don't have a pantry and my kitchen has very limited storage so I need to find storage containers that will sit in the corner of my kitchen and store some of my food. I think I may have found just the thing. These are actually storage containers for pet food but they are air tight and will work just as well for dried goods.  The bonus is they cost a lot less than similar items sold for (restaurant) food storage. I also looked at other types of bins but I like these ones on wheels with tight closing lids. 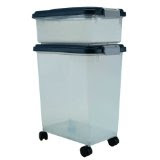 A purchase I made a few weeks ago arrived last week and I haven't taken it out of the box yet. I need to finish moving things around so I can it up and try it out (more about that later).  Instead I spent some time dealing with purchasing the new Word 2013 Suite and having it installed on my PC. Later I will have it installed in my laptop too.

I gave some time to my calendar and planned to attend my writer's group.  However the session for tomorrow is fully subscribed so I'll have to wait for next week or the week after.  Much later, I spent time viewing parts of a 'new to me' documentary called the Up series I believe it is the last in a series of

documentary films produced by Granada Television that have followed the lives of fourteen British children since 1964, when they were seven years old. The documentary has had seven episodes spanning 49 years and the documentary has been broadcast on both ITV and BBC.


The children were selected to represent the range of socio-economic backgrounds in Britain at that time, with the explicit assumption that each child's social class predetermines their future. Every seven years, the director, Michael Apted, films new material from as many of the fourteen as he can get to participate. The purpose is also stated at the beginning of "7 Up," as, "Why do we bring these children together? Because we want to get a glimpse of England in the year 2000. The union leader and the business executive of the year 2000 are now 7 years old. (Source: Wikipedia)


Part 1 of the series can be found  here if you are interested and youtube also has several parts to this series available on line if you don't mind watching on line. I didn't get to watch all the parts so I will continue another day as it is quite engaging.

I found it very interesting having a peek into what life was like in 1964 for these British children from all walks of life and  was quite impressed with them  The documentaries begin to document these children starting from age seven and then every seven years thereafter until they reach age 56.  At age seven they seemed so mature. I don't think seven year olds today are quite so mature but perhaps I just haven't spent enough time around this age group to really know.  I do know that youngsters of today are exposed to far more than the youngsters of old, so perhaps they are more mature or as mature, but in different ways. One of the things that surprised me about the 7 year olds in the documentaries is how many of them had boyfriends or girlfriends and spoke so freely about having these young relationships.

I read a blog post today asking what the readers have done to save money today as part of frugal living. I always make an effort to live frugally and stretch my funds as far as they will go but I had to think about my answer for today's savings.  I saved elastic bands from the produce purchased yesterday, made coffee and drank it at home, made home made soup and ate home made bannock bread.  Lastly, I guess I saved the cost of a movie ticket since I am not going to the "56 Up" documentary which is playing in town. Instead I am watching all the free parts on line.  On my brain is the question of how much the new appliances I got after Christmas will save in my power bill.  The appliances are all energy efficient so if they save me money it will likely be evident over the course of the year.  Any savings through the new appliances will be offset by my heavy use of the electric heating this winter.  With the sore knees I could not tolerate the usual cold.  Still, I am curious and will be watching the power bills.


I hope you are keeping warm if you are having a cold winter. For those of you suffering from high temperatures like in Australia, I hope you are managing to keep cool and hydrated.

Happy weekend to each of you.
simple joy simple life