I had to  come out from my blogging break for a short while to share some exciting and wonderful news with you. I've written before about my volunteer efforts in Kenya for the widows and orphans. One of the projects that has been on my mind for quite some time is providing all the village women in Chepkurbet with a jiko stove.  These women are from the Kalenjin tribe in the beautiful Rift Valley.  Read more about the Kalenjin people here.

These women and their children live in huts without running water or comforts that many women in the west have.  I wanted to help give them just a little more ease in their lives than what they have been accustomed to. It didn't seem right that I would have running water, electricity, washer and dryer and dishwasher and these woman don't have any of these things.  Beyond that I wanted to do something that would improve their quality of life in other ways.

I learned that the women traditionally make 3 stone fires. It is the cheapest stove to produce, requiring only three suitable stones of the same height on which the women can balance a cooking pot over the fire. However, this cooking method also has many problems.

Making these fires requires the women to travel far and spend hours out of each day to gather the twigs and firewood that they need.  For women alone and travelling far, there can be safety issues and threats to their security. Purchasing wood or charcoal to make the fire are options but these villagers have limited funds which must stretch to meet many other needs.

The energy use in a 3 stone fire is not very efficient as there is nothing to contain the fire.  This means more wood is burned and the women have to spend a lot more of their time to gather the wood. The more wood that is used, the worse it is for the environment because more trees are consumed and deforestation then occurs.

You can see from the photo below that the 3 stone fire is open on all sides. The cook must balance the pot on the stones and so cooking and stirring the contents of the pot can be precarious. This is very dangerous work for women and children alike and can lead to burns and scalding from both fires and hot water or hot food. 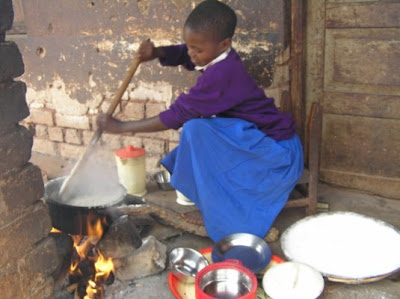 The 3 stone fires also create a lot of smoke.  The smoke creates lung and eye problems for the women and their children. The World Health Organization says that smoke that is vented into the home is responsible for the deaths of 1.6 million people worldwide every year. This is one death every 20 seconds. That is an astounding figure and a very sad situation indeed.

A 3 stone fire will only enable a woman to use one pot at a time. This means that it is inefficient for preparing tea and a meal of ugali (ugali is an East African dish made of maize flour). It will takes hours and hours as you must boil the water in separate pots for both of these things. This is also where I got the photo of the girl making ugali on a 3 stone fire in the photo above.  I could not locate my own photo.  Since my photos were taken in 2007, I went through many computer problems and virus attacks. The photo I was looking for is either damaged or on a disc somewhere in my files.

After I learned all about the cons of a 3 stone fire, I knew I had to do something for these women.  In 2008, I was helping the school children and farmers with educational and seed and fertilizer needs as well as harvesting needs. At the same time I was trying unsuccessfully to raise funds for these projects and to find safer and greener ways for the women to cook. Finally in the fall of 2008, I went ahead on my own to fund the construction of 11 new stoves/ovens for the village women. These stoves/ovens are called jiko ovens. First we build an oven like the one you see below. It is still a bit orangey in colour as it must cure (dry) before it is ready for use. Next we add a jiko pot made out of ceramic. You will see that in one of the photos below.

Many organizations and individuals have been working on developing improved stoves to address the kind of issues raised in using a 3 stone fire. Of all the improved stoves, the Kenya Ceramic Jiko (KCJ) seems to be the most widely accepted and has become a standard item in many homes in Kenya and neighboring countries in East Africa.

Charcoal is the standard cooking fuel in East Africa if you have some funds to buy it or you can make it yourself. Otherwise women have to collect many twigs to start their fires.  Traditionally it was burned in a metal stove or “Jiko” as stoves are called in the Swahili language. The KCJ is simply the traditional Jiko mated to a ceramic liner, producing a stove that is at least one fourth (and up to 50%) more efficient than traditional all-metal alternative. You will often read that it only costs $2 to $5 US but I have yet to find them at that price. Although the exchange rate today is much better for the Canadian dollar than it was three years ago, Canadian money still doesn't go as far as American funds. Also, Kenya is a very expensive country with ever increasing prices.

The new stoves and jiko pots went over extremely well with the first 11 households. Over the next year and a half I received a half dozen requests as to when we were ready to continue building the stoves and ovens for the remaining village women. There are still 28 households to service.We also hope to build 5 stoves for widows in another village called Anamoi.

I racked my brain and reviewed my budget a thousand different ways to see what could be done. It was challenging due to the global recession to see how we might proceed.
.....to be continued.
at August 25, 2010