It's Friday.  I always look forward to the weekend.  Even though I'm retired I find that the weekends give me a breather from the usual schedule of appointments and allow me to catch up on other things or simply relax.

I've got several things to cover today as I haven't posted in over a week.  Firstly, let me say a big "Thank you" to  those who contacted me about the raging fires in Northern BC and Alberta and inquired about my safety.  I am fine and my loved ones are fine.

The fires are happening in the far north of British Columbia,  the province where I live, and in Alberta, the province next door to us.  It is scary seeing all the images on the news on television.  The fire in northern Alberta is so huge that it even made the "Africa Live" newscast. The fires in both provinces are massive but I believe the one in Alberta is somewhat larger.

The people in the far north have gone through a harrowing time but by and large they are safe. Organizations like the well respected Red Cross in Canada and many other charitable groups, all sprang into immediate action.  They are working to help the victims of loss in Ft. McMurray;  many of whom have lost homes, cars, all their worldly possessions and their livelihoods.

As an interim measure the people received cash (debit) cards a few days ago ($1250 for each adult and $500 for each child). Governments and insurers are on the ground assessing damages while the brave firemen fight the flames. Both the Premier of Alberta and the Prime Minister of Canada were in Ft. McMurray on Friday having a first hand look at the situation.

Much time will be required to rebuild but I have no doubt it will be done. Albertans are a very strong stock of people and they have massive support from other Canadians and dare I say all around the world. All this devastation brought back memories of the huge fires that surrounded the BC City of Kelowna some years back and all the flooding that damaged many communities in Alberta just a few short years ago.

I'm so happy to report that the young orphaned boy who had a cancerous tumour on his face and neck has been discharged from hospital in Nairobi.  He and his escort have gone home where we hope he will be able to start chemotherapy soon. It was a challenge to meet the hospital bill but we did it!!  I am so glad that his Nairobi doctors assessed him as well enough to go home to his people. Please continue to pray that his health would improve, that there would be no ill effects from chemo and moreover that the financial challenges for his continued health needs would be met.


Another young man I know from a small northern village in Kenya is graduating this summer from an Engineering program.  Right now he is on a short school break before his begins his last attachment (work experience which is a mandatory part of his schooling).  I wanted to send him on a trip somewhere as a graduation gift because he hasn't had a chance to see his own country.  In the end though he and I discussed and decided that driving lessons would be far more useful and help him as he starts looking for work and begins a career. He started driving lessons last week.  He was overjoyed and highly motivated so he is doing a crash course of several lessons per day.  HIs driving nstructor was impressed with him  said that he already knows how to drive.  It is now a question of gaining a little experience and getting his license. Apparently in one of his former attachments the student got a lot of experience driving a forklift.  I didn't realize it but I now understand that a a forklift machine has a clutch and stick shift just like a standard vehicle. The experience is helping him adapt quite readily to driving a truck and at the tail end of his lessons he will also gain some experience in a regular car.

I know another  young Engineering student in Kenya who is also in his final year of studies. He has one more semester before he starts his attachments. He will do two of them as a result of having delayed one from last year. He is a very thoughtful young man who wants to do all the "right" things in preparation for his future. Just a few days ago he asked me if I would help him with learning about the budgeting process. Of course I said "yes".  Budgeting is another important skill that young people need and will use for the rest of their lives.

Here at home, the weather has been absolutely beautiful.  Our weather has been unseasonably warm but this week the temperatures are "just right". That is rare occurrence and I'm enjoying it a lot because it has allowed me to do a little bit of planting and arranging of things in the garden and on the patio though I still have work to do.  You can see in my photo below that the Solomon's Seal is almost finished for the season. It comes out early and I love that it requires no work. The petunias and geraniums will fill out much more. this year I couldn't find pansies until yesterday.  There were only a few starter plants of pansies so I won't have as many pots as I normally like to have. 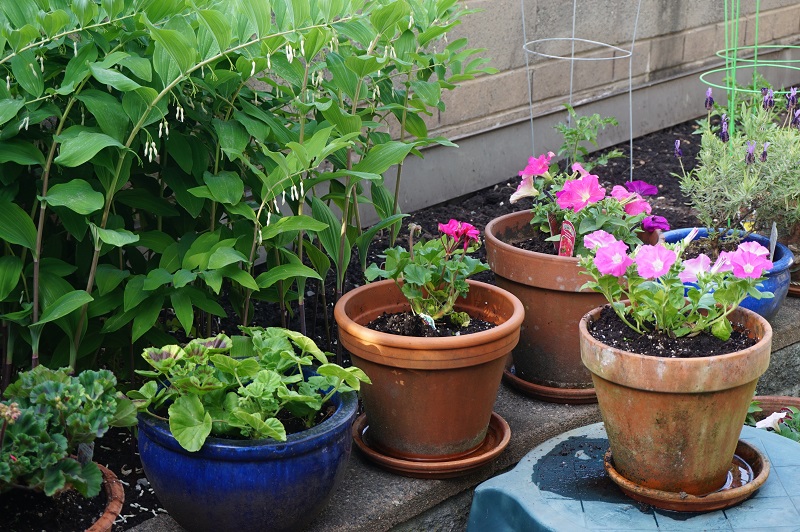 In a few weeks everything will look much fuller nicer.  I'll be able to sit and enjoy the evenings on the patio. While I've been out in the garden I've spotted little hummingbirds on several occasions.  This is a new thing in my garden and I hope they will come around more often and that I'll even be able to get a photo or two though I might have to sit around and wait for them outside since they flit around so fast.  Unfortunately, a black crow that hasn't been around for some time, has returned. I don't know why he went away or why he is back but I find him a nuisance and his presence ensures the other small birds stay away. 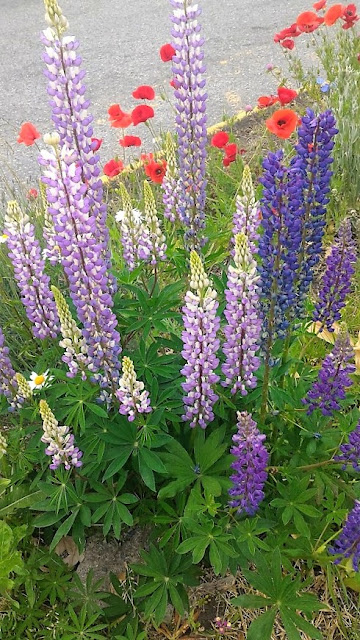 It will be awhile before my garden is fully ready so while I'm waiting for things to grow, I am enjoying flowers on my walks.  Here are a few I snapped on Wednesday afternoon. 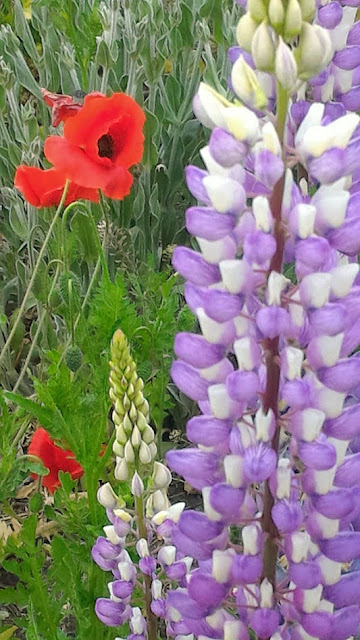 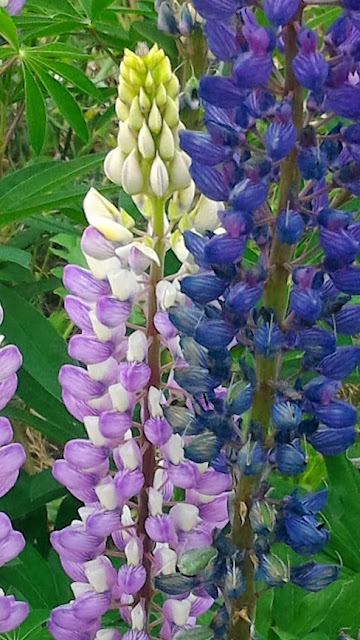 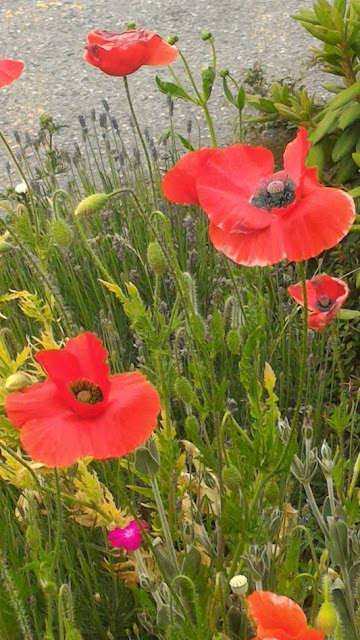 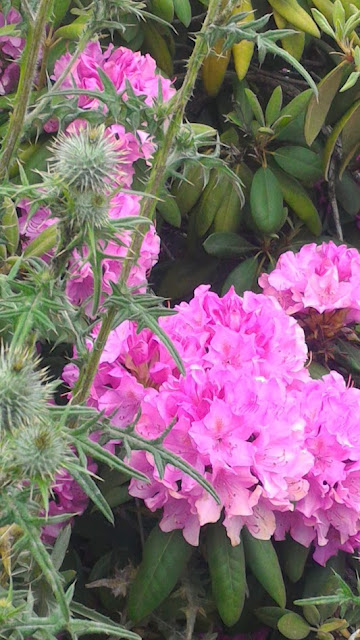 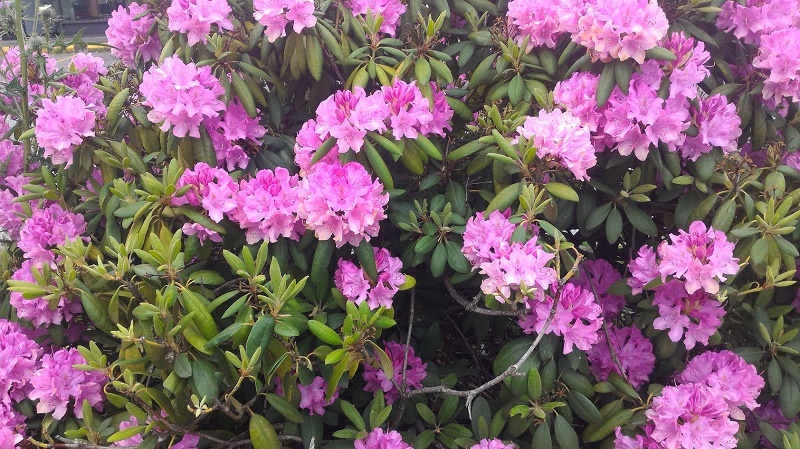 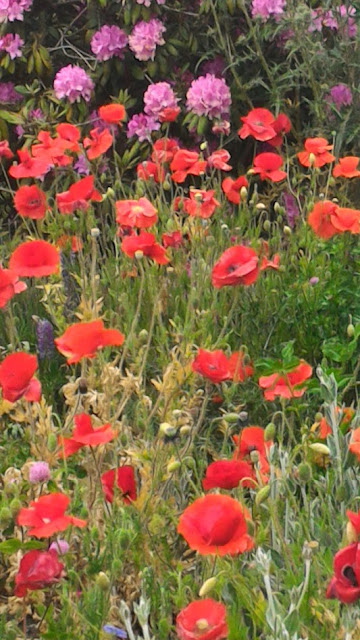 I captured this sky today (Friday, May 13th). 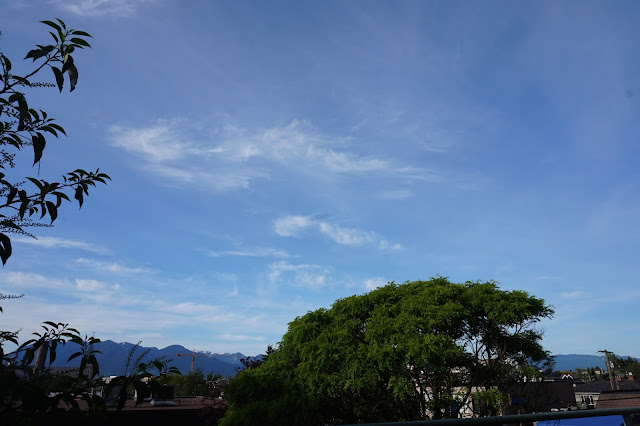 As I've mentioned in several recent posts,  I haven't been on line much because I've been trying to catch up with things.

I'm feeling good about being able to catch up with numerous friends before the summer gets busy with visiting relatives. It started last Sunday at a beautiful barbecue with several friends I haven't seen in a very long time.  We all met at my former church where several of them still attend.  The food was fantastic and the company even better. We all hope to see one another again as a group and also individually. It is always a challenge to find time when everyone is free but it all worked out so beautifully this time.  I didn't take any photos of the food or gardens to share with you. Instead I just tried to focus on visiting with my friends rather than worrying about photos.

A few days later I got together with another friend for a catch up visit. We tried to get together in March but she got busy and it turns out I wasn't well enough anyway.  Luckily we didn't have too much problem connecting in person this time.  It was nice to renew ties because soon she may start working and will have less time to get together.

Last night, I had a late night rendezvous for with an out of town friend.  We got together for coffee and dessert though I was very tired.  She lives far away in Calgary and I never get to Calgary so I'm glad for the fact that she gets to Vancouver at least twice a year.  She is under a lot of stress over her husband's poor health and I worry about her.  Her husband has had several heart attacks and it is only by the grace of God that he is still alive. It isn't a question of lifestyle or poor diet but due to childhood illness his valve is (or multiple valves are) enlarged.  Surgery to repair things is extremely risky. For now the doctors are not planning surgery.


Thank you for visiting my blog today. I hope to visit yours soon.