Here are a few photos of what the scene looked like off my balcony on Tuesday morning. It snowed all night Monday and this time it stuck around a bit longer. I took these photos just after 6 a.m.  Yesterday when I went out to do some grocery shopping, I noticed that most of the snow had melted but some still remains on my patio in areas where the sun doesn't reach. Snowing so early in the season is highly unusual. I guess the last time that happened was in 1991. 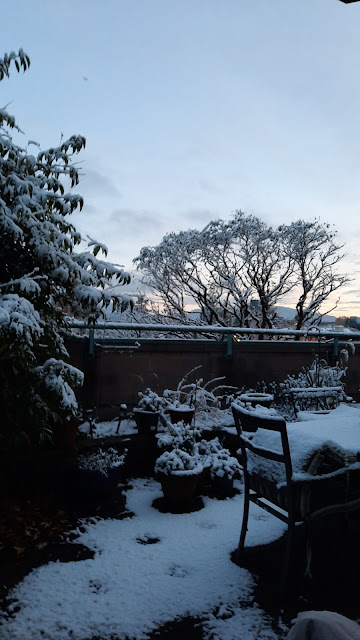 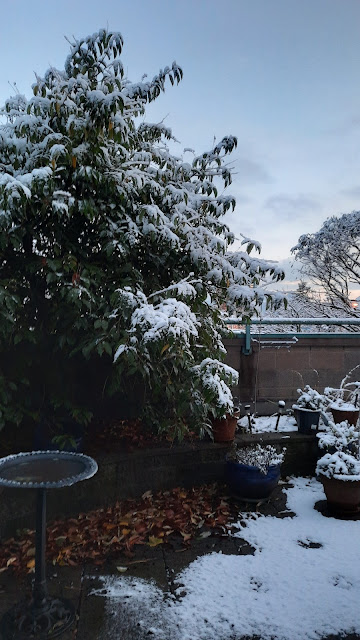 Almost all of Canada is suffering a great shortage of staff in many sectors. Canada's Immigration Minister and the Government of Canada has released it's figures for immigrant or newcomer admission targets for 2023, 2024 and 2025. Altogether newcomers will total  almost 1.5 million people.  Skilled labour in the health care and construction fields have been identified as priorities.

On the news the other day this graphic was shared about the projected needs for health care workers over the next 10 years.  These projections are just for the province where I live.  The needs for the rest of the provinces and territories in the country are just as great. If the government plans to attract more foreign workers something needs to be done quickly to address the very real housing shortage and it's related issue of affordability. 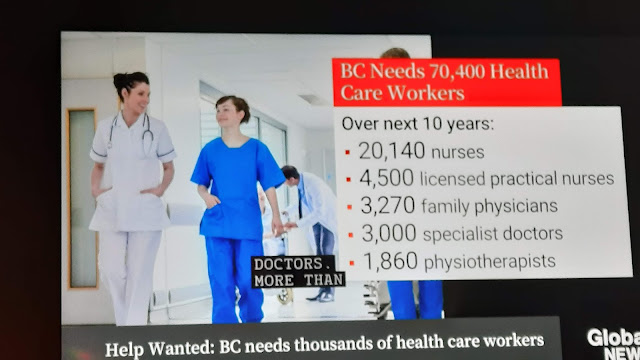 In pleasurable pursuits I said earlier that my reading goals this year would be modest and they were. I decided I'd aim for 1 book a month knowing I might read more some months and nothing in other months. As it turned out I did reduce my reading as planned but I still read far more than I intended. To date I've read 43 books and almost 16,000 pages. I'm sure I won't make 20,000 pages before the end of the year. Even though I've got another 7-8 books in my reading pile I may not be able to complete all of them.

I had hoped to cut down on reading and spend more time on crafting and sewing this year. That didn't happen because of decluttering and small household projects that took more time than I thought they would. But I did manage to complete several alterations on various trousers for DH. 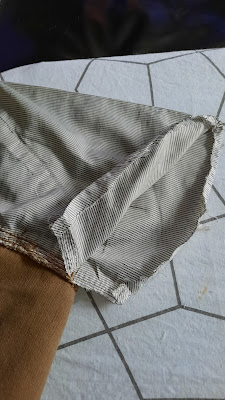 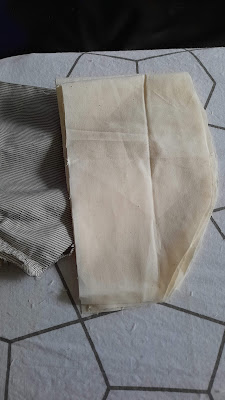 In the photos I'm showing preparations involved in lengthening the pockets on a pair of DHs trousers.  When I compared pocket length in various of his  trousers these ones were shorter by about 4 inches. That's a lot.

I didn't have the right fabric in my stash so I 'made do' with some light cotton fabric. After cutting the shape and sewing the seams, I attached the new piece to the bottom of the original pockets. Those of you who are sewists know this isn't as quick as it sounds. The challenge I have is none of my machines are as able as mom's old Singer treadle machine to sew through several layers of fabric as in the side seams of trousers and jeans.  But I did the job and I'm happy it's done.  The other project was tapering the legs on a new pair of jeans and hemming them. DH has worn the jeans a lot since then. Next up, I have several pair of pants of my own to hem and I'd like to shorten a linen tablecloth I bought a few months ago.   I still have a lot of household stuff to deal with and I think I'd be more able to focus on sewing once these other things are out of the way.

I know some people are already putting up their Christmas trees. I don't plan on setting up mine until some time in December, usually about half way through the month. However I've been buying a few gifts here and there whenever I see something I like.  I can spread the Christmas spending over a longer period of time that way. Earlier this week I was able to wrap gifts for 2 people on my list. The task was made easier by buying some Christmas fabric bags from the Dollar Tree. They are quite cute and made the job a lot quicker. I think I need to get a few more of the bags for the other Christmas gifts I want to give.

What about you dear reader?  Are you experiencing health care worker shortages where you live? What is your government doing about it if anything? Have you read any good books lately? Are you working on anything creative or have plans to sew anything for Christmas gifts?