First I start with the nice bit.

I closed the year by attending my first ever performance of The Nutcracker.  Though I expected it to be good it was even nicer than I expected with all the beautiful costumes, sets and classical music. I think my favourite part was all the scenes with the Snow Czarina in them. She was beautiful and danced all on pointe.  She made look so elegant and graceful but I was thinking "Ouch!"

Of course I couldn't take photos during the performance but here are a few shots taken just before show time and during intermission. 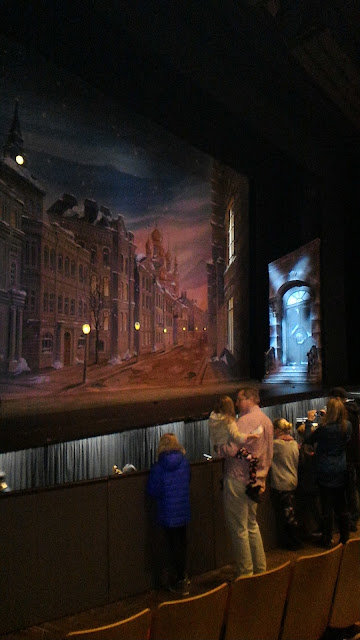 Now on to a not so nice event.

Two nights later as I was thinking of heading to sleep, the entire area from Victoria on Vancouver Island to Vancouver and south of us, experienced a moderate earthquake.

It was like several shakes of the building, then one loud shake which felt like the entire building was lifted and "plunked" down hard. At the same time as the hard "plunk" a very loud bang occurred. It took 5 minutes on Twitter to establish that it really was an earthquake and another hour for the local television news to start broadcasting. I took that time to locate my emergency kit (how prepared was I?!!) went through it and added some clothes and tried to decide what to do.

I stayed up for another 3 hours before deciding that things had settled down.  I'd heard on the news that the quake was not along the fault line that goes all up and down the coast from Alaska down past California.  Aapparently California had experienced an earthquake of about the same strength several hours earlier. 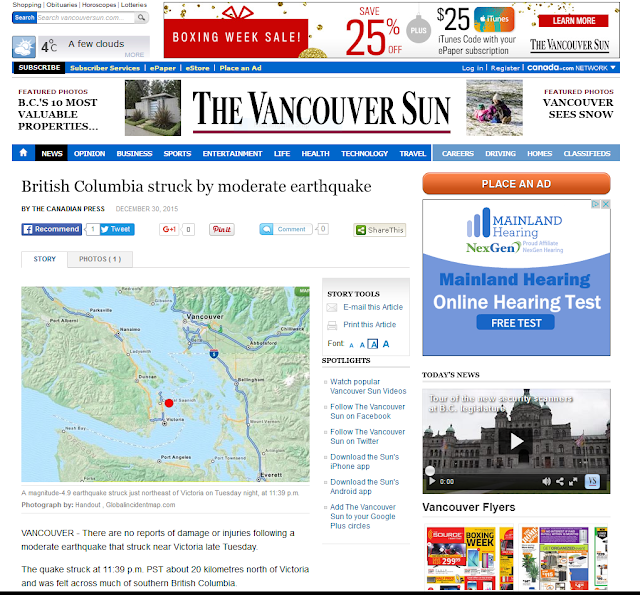 That is how things started off in my part of the world this New Year's.

Across the world in Kenya where I do a lot of missions work some of you will remember the widow from Mauche, Kenya who recently lost her husband. If you haven't read about it yet you can read more here.

My friend and work mate, Jonah from the Missions of Hope, Kenya, had just finished helping this widow and another young man get medical treatment.  Immediately thereafter he had to rush home and help out with an Initiation Feast

About 16 young Kalenjin boys had just completed their initiation rites. This is a time when young teen boys go away in the bush for one month. There they are taught and guided in the cultural ways, wisdom, rules of personal behavior and cultural rites. The initiation rites are a rite of passage when the boys are also circumcised and after the passing of knowledge they are considered young men who know their place in society.

Once their training is finished, they gather together with family members and community and have a time of feasting and celebration before they make their ways home and back to school.


Immediately after the initiation homecoming, Jonah and a team of volunteers went to Pokot country on another feeding mission. They go about once a month and they generally go to different Pokot communities each time.  The first person they came across was this emaciated, elderly woman in the photo below.  She touched their hearts so much and the team members were glad to be able to feed her and several other needy people. 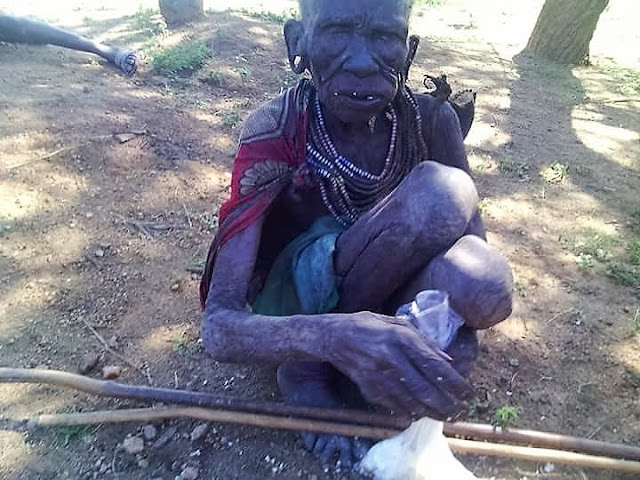 Everything was going well during the Pokot missions outreach but tragedy struck on the 2nd night.

Jonah and a Pokot man who was hosting him were both bitten by a poisonous black mambo snake.  This is probably the most dangerous of the snakes in Kenya and people often die from it's bite.  The Pokot people immediately tried to suck out the venom from these two men and administer traditional herbs.  But these men urgently needed to get to hospital which was many hours away. Someone had to drive all night from Eldoret (located several hours south) to fetch the man and take them to the nearest hospitals.

Jonah was driven to the missions hospital in the small community of Kapsowar where he was immediately attended to and given good treatment.  The Pokot man was taken to Eldoret but we lost touch with him and what was happening.

In Kapsowar the hospital staff did what they could.  But their equipment is a bit outdated and could not detect whether venom remained in Jonah's leg. It seemed likely that venom remained because he was unable to walk or stand and he wasn't healing as expected.

He humbly asked if he could be transferred to a bigger hospital.  Of course, being a a matter of life or death or loss of limbs, it was imperative that he be moved to a larger centre. As he could not walk or stand and he had no family or friend there to escort him he had to go by ambulance.  It took almost another day before an ambulance could pick him up and transport him to the City of Eldoret.  Once in Eldoret, the leg situation was quickly stabilized and improved tremendously.  The equipment was able to pinpoint the venom remaining in the leg. We give thanks as he is now able to walk again and medical staff are ensuring his blood doesn't clot. I'm not certain how long he will need to be in hospital.

The good thing is that Jonah is now in the same hospital as the Pokot man though they on different wards.  It seems the Pokot man unfortunately had not been given medical aid because he doesn't have insurance and he doesn't have any money to pay a deposit.This often happens to poor Kenyans and many of them die while waiting for medical assistance or their conditions radically deteriorates because they cannot come up with funds.

This goes on despite the government officials making public announcements that no Kenyan should be denied medical treatment for lack of funds.  Hospitals have been told that they should administer treatment and worry about billing later. This however is not the practice on the ground.

The poor man had been suffering and in pain for almost a week!  He needed immediate medical help otherwise he was in real danger of losing his leg.  As soon as I heard this I came up with the deposit.  That night the man had successful surgery.  I'm praying for his full recovery so that use of leg is not impaired.

He is very grateful for my help.  Apparently, I have been repaid by him in the form of two goats which are back in his home area.  I intend on letting him keep his goats as he will likely need them to try and pay the hospital bill.  I am just happy he didn't lose his leg. Life is so very hard for these people.  It would be even harder on one leg.  Medical supports are almost non-existent especially in the isolated areas.  It is hard enough to get medical supports like wheelchairs or crutches when you live in the big cities like Nakuru and Nairobi.

Unfortunately the people In Pokot villages live so far from medical help.  Even if they lived closer to fully equipped hospitals, they don't have ready cash on hand to pay for deposits and medicines.  In Kenya you must pay a deposit (which can be quite substantial depending on what treatment you require) before you get any medical treatment (even though the government says otherwise).

I am grateful that both of these men's lives were spared. Jonah suffered one snake bite which was painful and debilitating.  But the Pokot man suffered three snake bites. Both of men are very lucky to be alive.  The longer you are away from medical help, the less likely you are to survive. I think they might have died if the local people did not try and help to suck out the venom and give traditional herbs because it took at least 8 hours for Jonah to get to a hospital and the Pokot man at least 12 hours as Eldoret is even farther away.  Apparently snake bites are very common in the Pokot (northern) areas of Kenya.  The hospital in Kapsowar sees these kind of patients regularly and while Jonah was there as a patient many of those admitted had snake bite injuries.

Thankfully Jonah has medical insurance and it is quite extensive (and good coverage).  But he still has to pay for everything out of pocket (ambulance, hospital accommodation, drugs, doctor, nursing, x-rays, etc.).  He has to save all receipts and make application for reimbursement.

This will be his first attempt to try and get money back from the government for medical purposes.  I'm praying that they do really reimburse him. In Kenya you can never be sure of what is going to happen where government agencies are involved.  If you are reading this, please pray for these two men and their financial needs.

Well my friends, we just never know what is around the corner.
It could be good or it could be bad.

Though my year has started off on shaky ground, quite literally,
I'm hopeful that much better things are ahead.

I'm also grateful that there was no big damage done.

I  give praise that these two men did not die
Through God's grace and man's medical wisdom, both of them will live another day.
Hopefully they both will have many happy years to come but they need continued prayer for full recovery.
~~~~~
God bless you and keep all of you and give you a good start to your new year.

Photo Credits: Mine and are all taken with phone. The last two photos belong to Jonah of Missions of Hope.
at January 04, 2016