The Sky Over Me in November

Yesterday's sky was quite dramatic and the rain came down in buckets for much of the day. I moved my patio table against the wall and put on the new table cover I purchased last week.  It's a cover that covers the table and chairs but it is extra big and I don't like the look.  I'm going to box it up, return it and buy a smaller cover for the table. I already have a cover for the chairs which I will stack as it takes up less space. 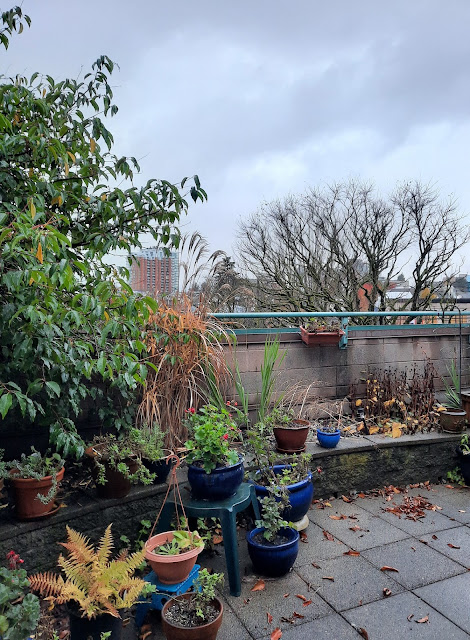 Believe or not, the geraniums are still producing new blooms but not as prolifically and everything in the garden has pretty much seen better days. My main hope is to get the patio furniture put away properly before throwing out the container plants. I did manage to wash the patio chair cushions, buy the patio table and chair cover and try it on. Next I'll have to buy the new patio table cover and then everything can be put away properly.  I'll have to wash the table again as it got wet in the meantime and wipe down the chairs so they don't rust with water pooling on the arm rests. Those of you who have garages can just store everything in your garage but here in the city many of us do not have a separate garage or even extra storage spaces.

This next two photos were taken on Sunday, November 15, 2020. I barely remember what I do from day to day because the routine is pretty much home based.  It's a good thing we take photos, lol and can find the dates on the photo files. 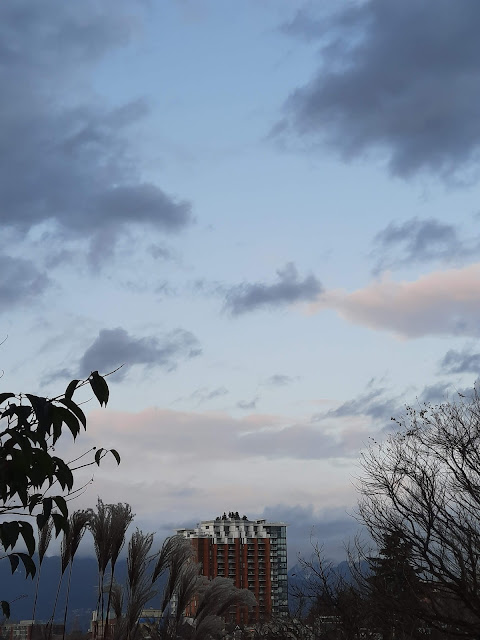 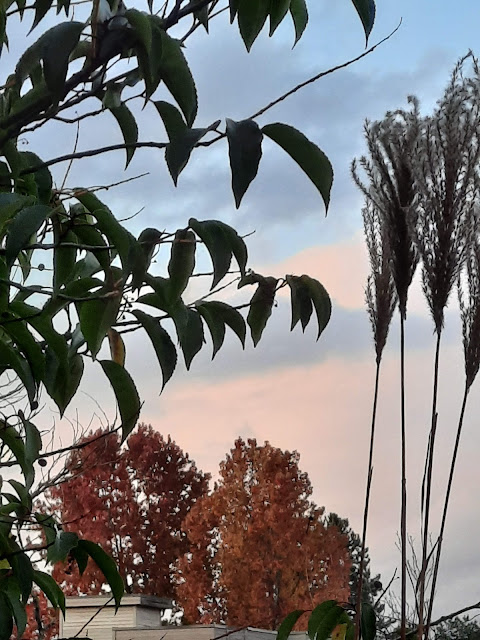 The last sky image is a colour by number painting I did on an app. I haven't done any of these paintings for several months but on Wednesday night I spent hours painting.  It's so easy to while away the time on the app and before I know it hours have passed by.  I'm not sure why I find it so appealing. I think I just like seeing what colours take shape and how quickly I can complete a picture since some of them are rather complicated. Wednesday night I completed them in record time as most of them were quite simple.  This particular scene speaks to me of northern Canada and Northern Lights (Aurora Borealis) though I don't think there are mountains like that in the very far north. 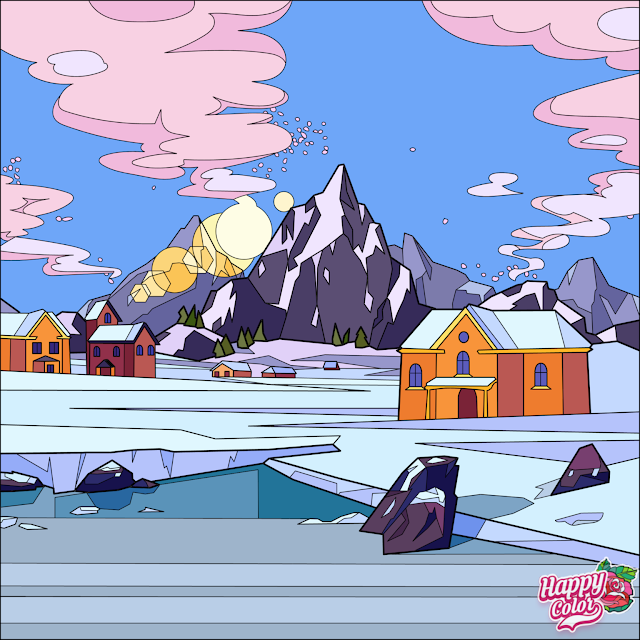 I've been running back and forth to the post office to mail cards and letters and also to pick up packages that never arrived. I've already had to cancel one order coming from California because the company is going out of business due to Covid and I needed to get my refund before then.  The package had tracking but the information was confusing and the parcel never did arrive after 2 months.  I also ordered parcels from a Canadian company.  They are not using Canada Post as their delivery service and they are several days past the estimated arrival.  Supposedly they have now arrived so I'll check tomorrow at the post office.  Last but not least, I also ordered a parcel from an Etsy Store based in Montreal, Canada. I ordered several weeks ago and the package has not yet arrived.  The package came with free shipping and I didn't know until after I ordered that there is no tracking number provided. So I do hope it eventually arrives.  Since Covid 19 pandemic was announced, the parcel service is very hit or miss. For quite some time the post office was operating at half capacity at their main distribution center.  I think they are now staffing up for the annual Christmas rush. I've noticed that the small postal outlet where I go, they have been inundated with parcels, mail and in store customers. It has always been a busy postal outlet but nowadays it's just crazy busy.

I've been busy cooking as usual. I suppose most people are these days and with more restrictive Covid measures in place things are not likely to change soon.

Saturday I made a ground beef soup with lots of veggies (potatoes, carrots, onions, mushrooms, celery) and macaroni in a tomato broth. Mom used to make a variation of this with home made biscuits and it is really nice to have on a chilly night. I wasn't up to making any bread so we had sourdough store bought sliced bread. 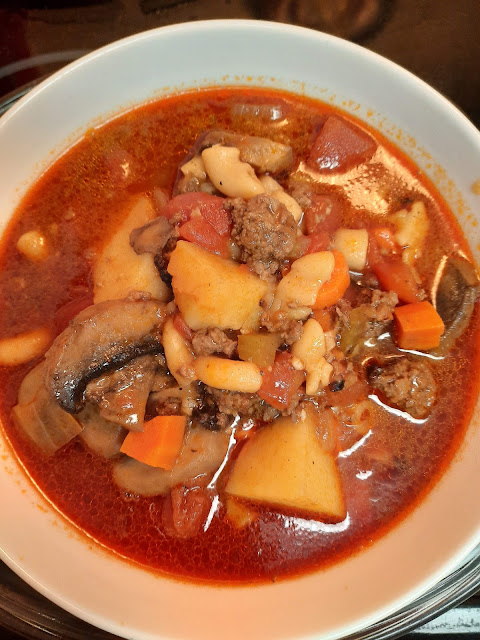 Sunday was roasted ham with mashed potatoes and green peas. We had leftovers on Monday and snacked on it here and there since then. I also cut up some pieces and froze them along with the bones to make ham and pea soup on another day. The ham looks much bigger than it is because I took a close up photo. 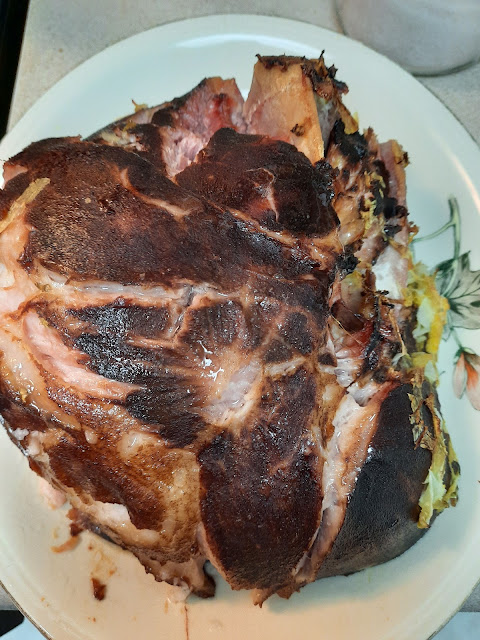 On Tuesday I made Sweet and Spicy Korean Ground Beef with rice and slaw. It's the second time I've made it and it is quite good so I see it becoming a new staple whenever I have ground beef and don't feel like having the usual. 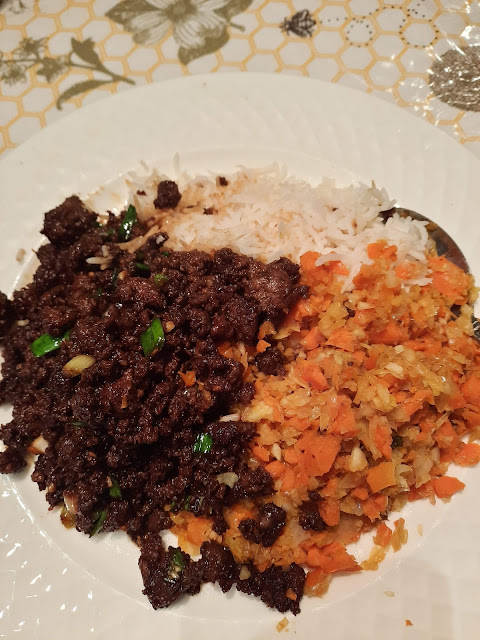 Wednesday we had spaghettini and meat sauce as well as garlic bread with enough for leftovers on Thursday. It looks a bit strange in my bowl because I put spaghettini on the bottom covered with sauce and Parmesan cheese, then I decided to add more on top of that. 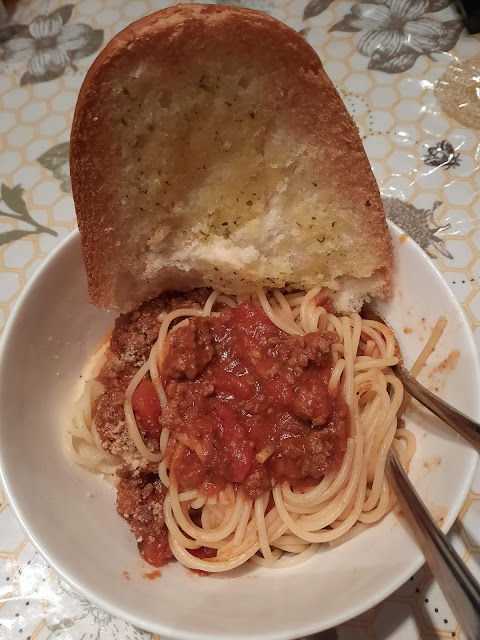 I've been feeling hungrier with the advent of the cold weather so have been back to having more protein smoothies and snacking on dark chocolate covered cranberries and cashew nuts or mixed nuts. 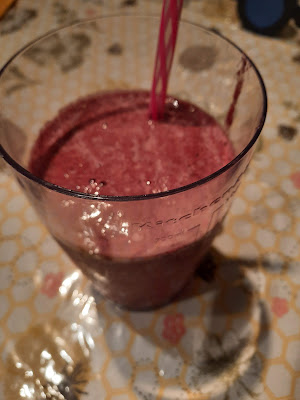 I'm not doing too much reading right now as I'm trying to catch up on my very long list of 'to do's. I had good success this week with making 2 personal phone calls that I've been wanting to make. I also did a follow up call with a credit card company that is very remiss in handling disputes. I told them today that if they have not received the form they requested (and which I've sent 3 times with the first time being in July), that I want them to know I intend to lodge a formal complaint about their handling of this matter. I was dismayed to discover that though I faxed the latest copy of the form to them on November 13th, they cannot even tell me that they received it because it takes 10 -14 days to 'reach' the system. I asked if they can receive documents by email and they said 'no due to security reasons'. So ridiculous and I am not impressed. I told them I will call back on November 27th.

I am however feeling very good today because at least I did make progress on another matter which has been occupying my mental space and managed to make a few phone calls and emails to move the matter forward. I still have more 'to dos' requiring phone calls and various other follow up but bit by bit they will get done. Thank goodness I have the time during Covid 19 as ordinarily I would find it difficult to find the time to get these things done. I know some people are bored and finding they are not happy with having to stay home and limit their lives but there are others of us who maybe also don't like having to stay home and be cut off but nonetheless we are finding it a blessing to have 'found' time to get things done. Hopefully we can all look forward to 2021 with more optimism and joy. For many of us, it's all in the perspective. 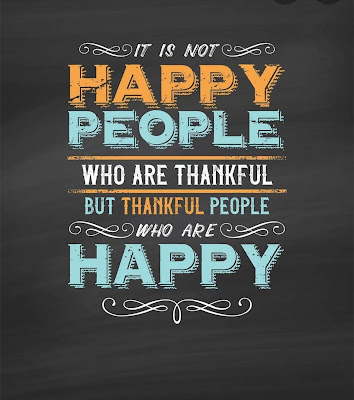 Joining in with Skywatch Friday.