It was such a beautiful day on Thursday and I was able to get out a bit earlier and get some photos of the blossoms. These ones were in my neighbourhood. I would still like to go further afield and get more photos on another sunny day. 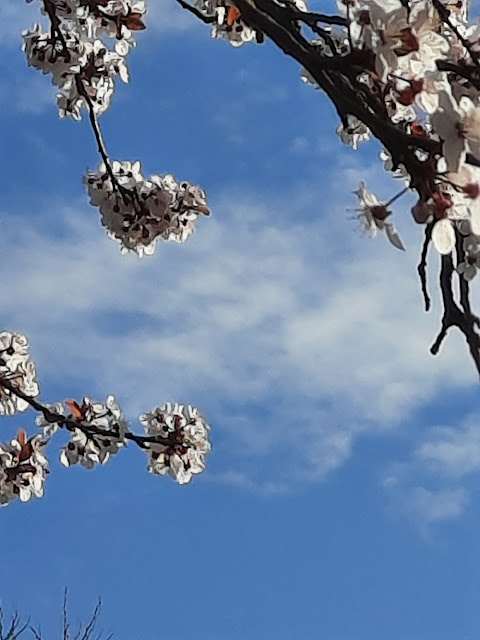 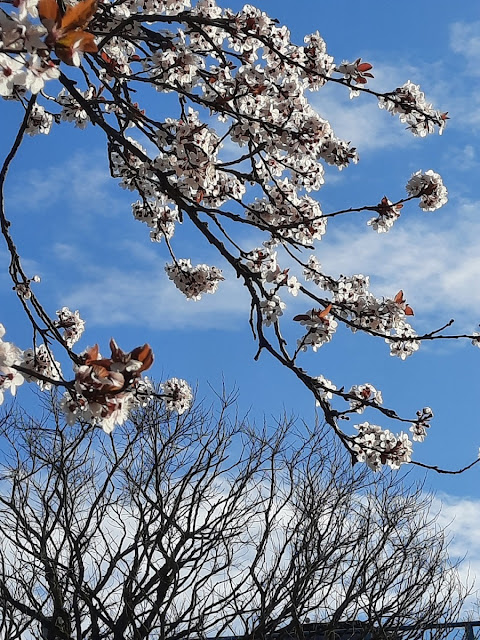 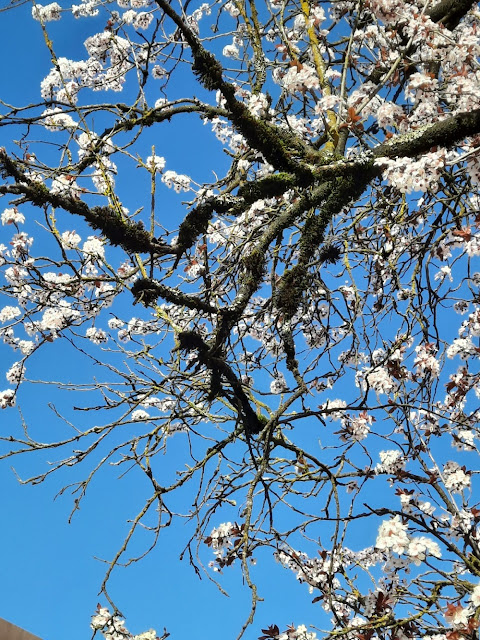 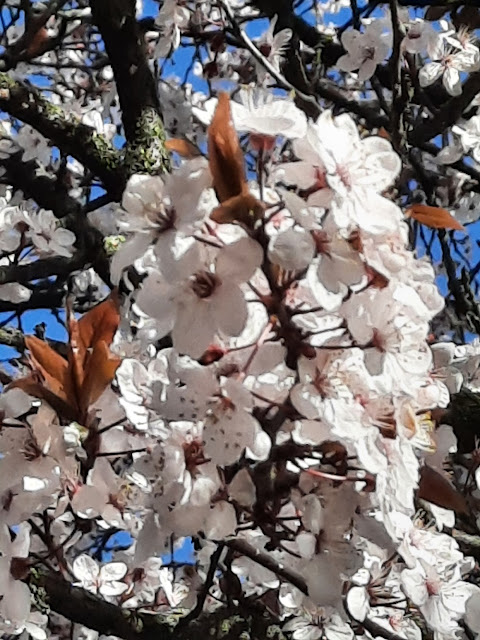 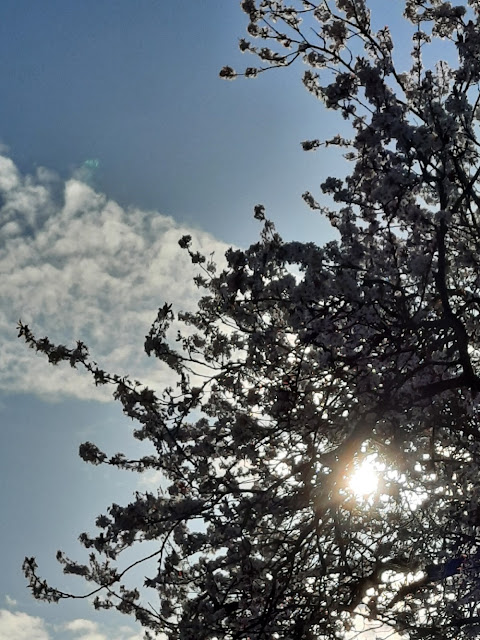 I have been busy working on a digital project that has taken a tremendous amount of time. I'm finally making progress on it and hope to finalize it in the next few weeks.  Then I can work on organizing all my digital and paper files as well as my closets. Things just seem to take me much longer these days.

I've also had a bit of time to read here and there and have returned the several decorating books I borrowed to the library. I also picked up two new books.  One is called Greenlights, a memoir by actor, Matthew McConaughey.  The other is a novel called The Sweetness of Forgetting by Kristen Harmel.  The novel is one of several I've read by the same author.  All the novels I've read deal with the horrors that befell the Jewish people during WW2.  In every book the author presents a lot of  new to me historical information and I've learned a lot (her books are based on historical facts).  I find the characters and story lines very interesting too though they are set against the horrible backdrop of the  Holocaust. 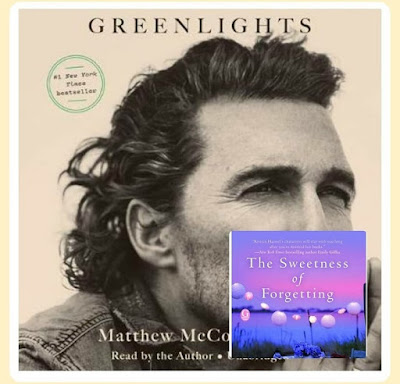 I've mentioned in other posts that I've been doing some minor renos and small decorating projects since before Christmas. I seem to have an endless array of things that need to be done, one of which is finding a better way to store items like throw blankets, large shawls, blankets, sheets and blow up mattresses.  A storage sofa might work but my sofa is still in decent condition so I won't be buying a new one soon. Instead,  I stored one of my blow up mattresses underneath the existing sofa.  It was a tight fit so I may put some bed risers under the feet of the sofa to gain a few inches.

I also ordered a blanket ladder to hang all the throw blankets and large shawls I have in my living room.  It gets pretty chilly for half of the year at night even with the heat on. I still need to find a way to store extra sheets and blankets which are larger. Again, I'm thinking of lifting my bed with bed risers and storing extra blankets there.  I do have a cedar chest for storing linens but it isn't large enough for everything. I think I've also stashed some large blankets in suitcases which are in my closet.  I also recently gave away a few sets of sheets I haven't used for several years and a few throw blankets so that I don't need quite as much storage as before.

I didn't work on my patio garden yet.  It's just as well because my plans have to change.  The strata council is bringing in new bylaws to be voted on in another week or so at the Annual General Meeting (AGM).  I have no doubt the new changes will be approved by the majority of owners. The changes that affect me more directly will be the new rule that we can only plant flowers, not vegetables.  The other rule is we cannot put out any bird seed in feeders.  I'm assuming it's because vegetables attract rodents and bird seed attracts birds and bird droppings.  My neighbours on the top floor have been dealing with the messes left by birds for some time and the strata had to approve an expensive solution of installing wires around the perimeter of the roof to dissuade birds from roosting.  Even though I've never been bothered by bird droppings, I know that the rules have to apply to everyone. I hope to grow some herbs however.  I may simply grow them indoors and take them outside to get some sunshine now and then.

In Covid news, the province has ramped up it's efforts to vaccinate people well in advance of it's original schedule.  It's because they are going to give everyone a chance for early vaccination by delaying the time between the first and second doses of the vaccine.  This means most of us will be vaccinated 4-5 months than earlier thought and I will likely get mine before the end of the month. Other loved ones have already got vaccine one and yet others will get one in April.

Last, but not least,  I want to mention one matter related to the Missions of Hope in Kenya.  I'm looking for a donor who would be willing to help Ernest every month with food and medicine needs.  It is very hard to find a job in Kenya evening during pre-Covid times. But due to his diabetes and Covid concerns the doctor doesn't want him to venture from the village to the town to look for work. I'm looking for a regular donor to support him monthly ($100 US dollars 85 Euros, $125 Canadian, 11k  JYen, $130 AUD).  If you cannot contribute monthly but want to help, kindly let me know at  kerichojoy[at] gmail] dot [com] (eliminate square brackets).

This is a photo collage of Ernest when he was in hospital in 2019. He was hit by a truck while he was walking to hospital to get his monthly medications. He has recovered from surgery with the help of one kind blogger friend who helped with medical costs for surgery and food during his recovery period. 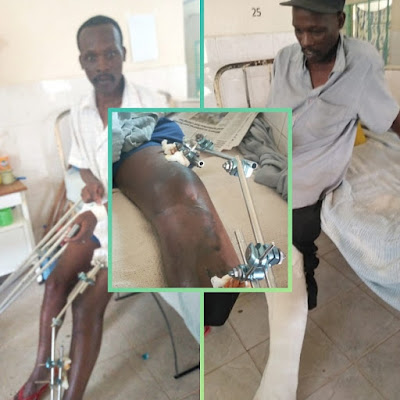 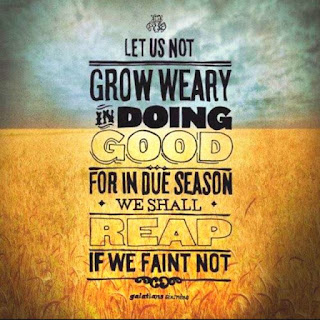 Galatians 6:9
Thanks so much for reading. Enjoy your weekend.