Here is to another week of Tuesday 4 in memory of Toni Taddeo.

1. Do you have an actor or actress whose movies you hate to miss?

2. Is there a movie or TV program you could watch over and over again?

I can only think of two movies I did like to watch more than once and both of them featured Angelina Jolie though I would not say she is my favourite actress.  The first movie is called Salt, an action-adventure-spy movie.  I found the story line very thrilling and it held my interest throughout.  I also enjoyed The Tourist, a romantic-spy-mystery.  The scenery and the acting in The Tourist were superb as the story was mainly set in Venice. 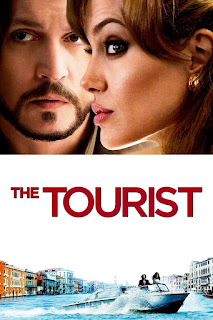 I don't usually go out of my way to watch something over and again but I would choose movies like Out of Africa and  Sleepless in Seattle as the kind of movies I would watch on more than one occasion.  I also like to watch some classic movies like The Sound of Music.  During appropriate holidays like Christmas and Easter, I also watch some movie favourites like It's a Wonderful Life and The Ten Commandments. If a movie I've already liked and watched happens to be showing on television and I'm "free" I'm usually open to watching it again.

I never really used to watch movies on television or on computer as I far prefer them on the big screen. But then the movies got to be so expensive and combined with the fact that the movies run are sometimes very short, I will now watch on TV or on line.  These days we have so many movie options and watching at home is very convenient.

I usually make a cup of decaf tea and some other snack (fruits, chips, popcorn, etc.). The snack depends on what I have on hand and what I may be craving.  I never go out to buy snacks specifically for eating while watching movies.

3. Do you have a list of books or magazines you are hoping to read over the summer? Would you share it with us?  Bonus: do you make a cuppa something or a snack when you read?

I purchased two magazines which I haven't read yet:  Small Space Decorating (Better Homes & Gardens) and Flowers and Gardens (Victoria Classics). I simply love looking at pretty photos of beautiful homes and gardens and I also like watching You Tube videos and looking at magazines to get ideas for small space decor and organization.

My tastes are very eclectic so it is hard to decide on what I really, really love for the purposes of living. I think  probably a home that is more rustic and comfortable because that seems to be what I gravitate to most since I like wood things and tribal rugs and artifacts or anything hand made.  I also love lots of greenery and flowers. 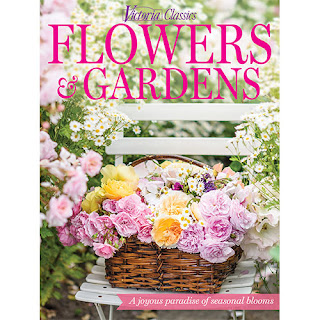 I have about 6 books on the go at the moment, several are sewing books, one is about heaven and who will meet us at the gates, another is a compilation of news articles written for the Irish Times by the late Maeve Binchy and the last two are novels.  I have a very long list of books to read and I'm always adding to it. Once I finish what I have on hand I will see what else I can get from the library that may be on my list.

A few weeks ago I  reached my quite modest reading goal for the year.  Now I'm just taking time and not reading much each day especially because it is sweltering heat right now where I live and we've been shattering temperature records all week. When I have a good novel though it is hard to put it down until it's done.I find it's also more enjoyable when you read a novel each day so you don't lose the thread of the story.

I make the same snacks and refreshments for book reading as I do for when I watch movies.

4.  What kind of music do you enjoy listening to?

My tastes in music are also super eclectic. I enjoy almost everything except for crude lyrics.  The music I'm drawn to most often is the classical music (especially Mozart), the music of the 60s and 70s (Joan Baez, Bob Dylan, Peter, Paul & Mary, Joni Mitchell, Ian & Sylvia, Buffy Ste. Marie, Simon and Garfunkel, Motown, Jim Croce, The Beatles, Elvis) light rock of the 70s  & Dicso (James Taylor, Cat Stevens, Creedence Clearwater Revival, The Eagles, The Doobie Brothers, Doctor Hook, KC & The Sunshine Band, Donna Summer) and spiritual or gospel music of almost any era and any style.  I also like country and western music as it was the music I grew up hearing most. The odd thing is I love music but hardly make time to listen to anything but gospel.

Linking up with Tuesday 4.