It's been a busy time since my last blog post. Much has been happening and mostly of a positive nature.

I was able at long last to have an appointment at the hospital with the plastic surgeon to discuss the outlook of the accident on my face. I suffered a fracture but the good news is that it is expected to heal without surgery. I have to return in early 2022 to assess things as they stand then. If you missed the story on what happened to me you can read more here.

My brother who lives quite far out of town came to the city as part of a multi-city tour with his wife. They were just taking a few days break since they attended a wedding about half way between where he lives and where I live. His wife also used the opportunity to do some Christmas shopping at some of the many malls along the way. They invited baby brother and I to dinner and we drove out to meet them in the suburbs at one of the branches of the Old Spaghetti Factory. The food was delicious but the best part was our visit. We haven't seen one another since we laid mom to rest 4 and half years ago.  They don't usually come to Vancouver at the best of times and I travel to where they live even less frequently. I didn't realize until after they left just how much I missed them even though we talk and share news from time to time by phone and by chat. My nephew who lives in the city also managed to spend time with them separately before they made the long drive home.

I have some news from Kenya about a very desperate situation and want to update all of you on an urgent basis in case any of you can find it in your heart to help.  The number of people who respond to these kinds of posts and requests is very low.  But make no mistake, we appreciate you so much.  Those of you who have given have made more of a positive impact than you can ever truly know and we thank you from the bottom of our hearts. We also believe that if people don't know about the needs of other people, there is no way they can do anything to help.  So here goes.

This woman named Janet and her husband are separated. They married when she was only about 16 years of age.  Since the recent separation, she has been living with her 4 daughters on family (ancestral lands) trying to eke out a living doing casual labour.  In a sad state of affairs, her biological brother was not happy to have them on the family land.  Usually the brothers inherit family land and the women go to their husband's land. The problem is that laws in Kenya do not protect women when their marriages break down and they have no where to go. Then you are left at the mercy of your biological family and often they themselves are in a difficult economic position.  As more time goes by, I see and read about more such stories of families in the news. Families that have been ripped apart over land issues.

Janet's brother removed the roof from her home in a bid to force her and her daughter's out of the home.  He also threatened Janet's life if she did not leave the property. 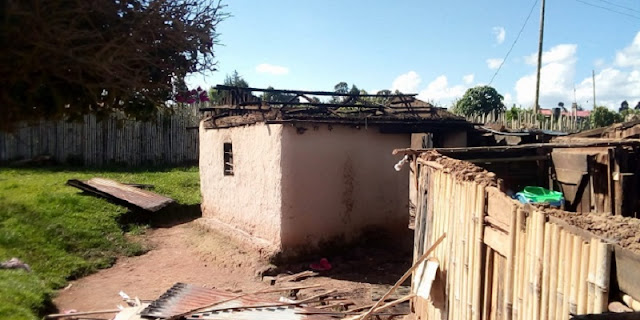 Needless to say, Janet and her daughter's are traumatized and living in terror and don't know what to expect. They have no home, no food, no source of income, no security, no hope. The only hope they have is in the good of others.

A local good Samaritan stepped in to give Janet and her daughter's temporary shelter and called on Pastor Jonah to attend so they could try to figure out a plan of action. They called the Chief/Elders and also went to the police. I haven't heard what, if anything, the Chief/Elders think and would recommend.  But I do know that police do not involve themselves in domestic disputes unless and until it is too late. I do not know whether criminal charges can be brought against Janet's brother for uttering threats to her personal safety. Whatever the case, the situation of Janet and her daughter's is desperate. Who would want to go and try and live in the home where she escaped knowing full well your own brother intends to harm you!

After putting heads together with Pastor Jonah and investigating options and costs, we decided that Janet and her daughters need shelter and a way to provide for themselves first and foremost. We have put together some funds for Janet to rent a humble abode which is attached to a simple shop that can also be used to sell goods that are needed daily by villagers.  Alternatively the space can be used to run a simple eatery. The place we can afford is very humble so it has no electricity or amenities. It's just basically one room for them to sleep and eat in. The good Samaritan and his family of 8 are living near the edge of security themselves so cannot do more than provide a temporary place to sleep. It's amazing that he stepped up to help out and his action tells me he has a compassionate heart.

We have purchased a simple solar system that can light up the rooms and can also be used to keep her as yet unopened shop/eatery open late at night since it gets dark at around 6 pm at the equator. It might even generate a few shillings by allowing others in the village to charge their mobile phones. This may or may not be an option because usually the villages already have places where the locals can charge their phones. We've also provided a small bit of funds for food needs. It would be nice if we could also provide a jiko stove to cut down on fuel usage and the smoke generated when cooking. We are trying to provide rent and food for at least 5-6 months until Janet can get on her feet again. Hopefully she will be able to generate enough income for all her needs with this breathing room. The tuition for her daughters will be the most challenging part.

The girls all go to school with the exception of the eldest one who recently graduated. School has already started but there are no funds to send the girls back to classes. See the cost breakdown in the photo below for the 3 school going girls (Approx $530 for each girl which amounts to $430 US, $575 Australian, 49,000 Japanese Yen, 370 Euros).  We've discussed sending the eldest daughter to hair dressing school. The tuition and related costs will be at least the same as the annual tuition for the girls. The hairdressing course would be in Kericho Town or Nakuru City and last about 9 months. After that she would be able to gain employment and provide for herself. 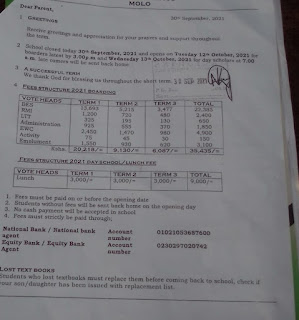 If you can assist with any of these needs please let me know. There is a Pay Pal button to the right on the side bar. From time to time, people say it doesn't work. It should be working now but if you have any issues kindly let me know.

If you've read this far, I appreciate it.  I also appreciate your prayers and any help you might be able to provide. God bless you as you consider whether you can help.

December started off just right. We had a clear, blue sky. At least most of it was blue. After several very damaging rain storms, this was...