In Vancouver, British Columbia where I live, the weather and temperatures have caught up to the season. Summer came late to our area but went on until well in to October. Our summer came late, I believe it was in June and we had a lot of rain until then. Then we had next to no rain and severe drought conditions by the end of September.  Things certainly do go to extremes these days.

Today though the real news is what has been happening in the Kenya Missions of Hope initiative.  I'm pleased to share some wonderful news of Kenya and the bit of humanitarian and missionary work that my DH and I carry out in that country.  Some of you may remember Eunice who was suffering from a condition of chronic anemia. It wasn't her only health condition. She has other conditions related to goiter and high blood pressure but the anemia is what sent her back and forth to hospitals on numerous occasions.  After being admitted and discharged from several hospitals, she again was transported by medical ambulance to a private hospital in the City of Nakuru, Kenya, located several hours from her home village. (You can locate Nakuru in the map below by looking northwest of Nairobi). She was admitted in February 2019 and she was there all throughout the pandemic. During that time she almost went home to Heaven on more than one occasion but after intensive care at the  High Dependency Unit (HDU),  she was able to bounce back. Truthfully I am amazed at how God kept her and helped her each time because I really thought her time to go home to Heaven had come. 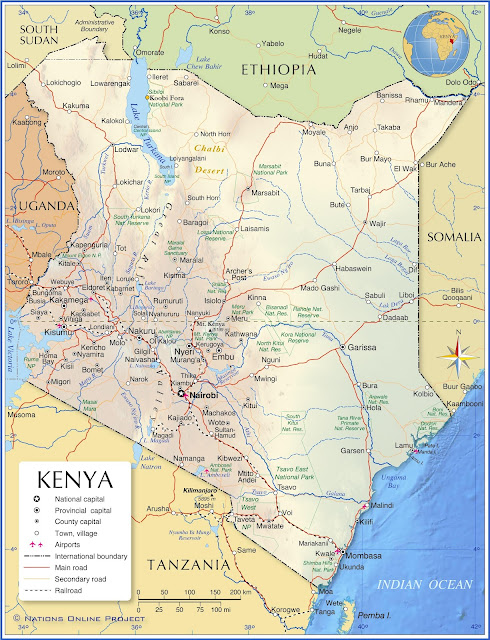 Between 6-8 months in the private hospital it became clear that the expenses would be far too much for what our little humanitarian group could comfortably deal with.  Private hospitals and even government hospitals in Kenya are notoriously expensive and often procedures are done with a fiscal purpose in  mind rather than a health related outcome.  We could not afford the expense of proper treatment at the hospital where she was admitted and truthfully we didn't even know what proper treatment would entail since we were never told how the hospital could treat Eunice.  They wanted to do some kind of surgery but could not say how it would help her if at all.  We simply could not support doing surgery on a weakened person with multiple health conditions without knowing how it was supposed to help her.

The hospital didn't really want to keep Eunice after the first year because of refusal to go forward with surgery. In addition we were not paying all of the hospital costs.  We were however paying for the intensive interventions that were required from time to time. We also paid for a private nurse to attend Eunice, Eunice's medicines, toiletries and special foods prepared by the hospital. After it became clear that the hospital was not really treating Eunice except when her condition took a serious downturn, Jonah and I discussed the need to try and move Eunice back to her home (hospital).  I strongly felt that at least Eunice could be visited by some of her family members or assisted by them in some small ways once pandemic restrictions were relaxed.

As you know the pandemic went on for quite a long time so nothing was able to be done about the move.  Moving Eunice would not be easy due to the prohibitively expensive ward fees that had accrued at the hospital.  It was only just before Jonah departed Kenya for Canada that he was able to undertake the travel for meetings with high level hospital officials in 2 different cities and  research and arrange with a new hospital for Eunice's  placement and arrange medical transportation for the transfer. All of these preparations were very costly.

At the new hospital, Jonah was assured by the new doctor that after several months of medical treatment and physiotherapy, Eunice would be able to go home.  I was cautiously optimistic given everything that had transpired over the previous 3 years.

Eunice has been admitted to the new hospital for going on at the hospital now for approximately 7 months. She has grown in strength and during that time.  With the help and assistance of one of her sisters, she has been able to go to her own home for overnight stays to see how she does. She has been doing well but is at this point still in hospital. She will have more home visits until she is hopefully discharged.

We are very happy for Eunice.  To God be the glory for keeping her, helping her and giving us the right medical contacts both to get her transferred and to rehabilitate her. She isn't home yet but we are grateful for how far she has come and I truly look on this outcome as a miracle.

Please continue praying for Eunice to be completely healed and able to live life on her own again. If you are able, and want to contribute to the work of helping the villagers in and around Kericho who need medical, food or educational help there is a Pay Pal button on the right of the blog. We also covet your prayers for these dear ones and for us so we can be guided in the humanitarian work. God bless.