I continue to try and cut daily and monthly living costs wherever possible and to save money on food in various ways so I can pay down my debts as quickly as possible. I haven't kept a journal of what I am doing but in thinking about little ways I've saved money this month here is what I remember.

~ I purchased flats of canned mushrooms, canned beans and kernel corn. I usually purchase these in individual cans which is not very cost effective so I don't buy them as often as I would like. After doing a cost per can analysis, I purchased these particular canned goods because they are staples in good home cooking and because the price ended up being between 82 and 88 cents per can.  The savings is about a 17 to 86 cent savings per can depending on where I buy them so I think I got quite a bargain. 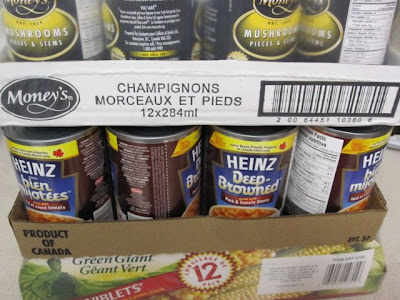 ~ Of course dried goods purchased in bulk are even less expensive than canned goods on sale. I purchased dried garbanzo beans (chick peas) which cost about a third the cost of canned beans when I am able to buy them in bulk. I soaked and cooked the beans to be used in making a couple of meals. I also used garbanzo beans to make a red pepper hummus this week.  The other beans I soaked and cooked were navy beans for use in the boston baked beans dish I made earlier in the month.
~ I shopped the flyers and was able to purchase, beef roast, chicken drumsticks and whole chickens, all for less than $2.00 per pound or $4.35 cents per kilogram. These are excellent prices for meat and it is not usual to get this good price in my neighbourhood. I always try to buy more meat when it is on sale. Then I cut it and re-package it into portions for cooking. Out of one package of meat, I can usually get 2 or 3 meals to feed 2 people and one of the people is a very large eater. Once I get a small freezer I will be able to buy more meat ahead of time, and also freeze soups and cooked meals for warming.
~ I shopped the flyers each week. This past week I was able to keep the cost of a 12 pack of double roll toilet paper and a pack of 6 roll paper towels to less than $5.00 a package. I like to buy 2 ply toilet paper with at least 250 sheets per roll and paper towels with at least 80 sheets per roll. One hundred (100 ) sheets is preferable but they are sometimes not available. I always do the cost analysis of each roll of toilet paper and paper towel in order to get the best buy. Fortunately paper products are generally on sale at one of the several places where I buy them in the neighbourhood. 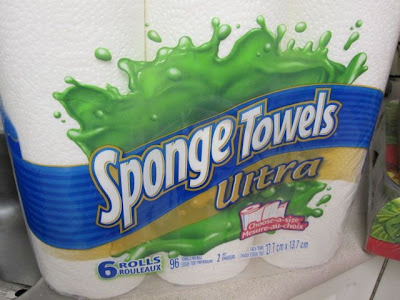 ~ I made snacks at home this month rather than buy them ready made. I made a batch of chocolate chip and raisin cookies, a batch of cinnamon rolls and some red pepper hummus for spreading on crackers or dipping tortilla chips. 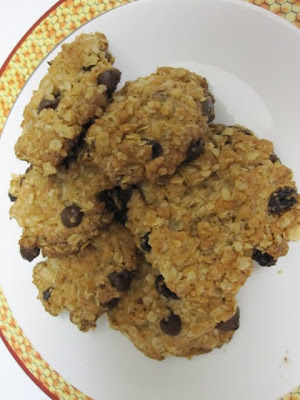 ~ I bought some bulk spice to make my own spice mixtures and arrowroot for baking. These ones are pre-packed in small convenient packs and are much less expensive than those in the food stores that come in cans or small glass jars. 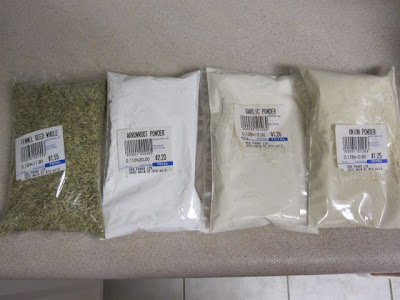 ~ I spent $100 on 2 pair of pants and got $25 back, plus a $40 coupon for spending in April.  I also get points from this purchase toward a gift certificate. I often shop for my niece and my mom at this store as well so it is easy to rack up the points toward a gift certificate. After I shop about 4 or 5 times at this store I have enough points for a $25. off coupon. The coupon comes in handy for buying undergarments or sleepwear for myself or family members and the coupons are valid for up to one year.

~ These next few 'savings' could also be deemed to be bad purchases. I choose to look at them as purchases returned which ultimately saved me money. I bought and returned a personal purchase of much needed undergarments for $186. and taxes. I purchased from afar and the items didn't fit so I returned them. I also purchased a new bedspread for my niece who has recently moved. I found the package was missing the cushion and pillow sham so these purchases were also returned for a "savings" of $60. and taxes. I also bought a 5 drawer cart on wheels. It was on sale for $19 and taxes (half price). When I got it home and turned it over, it had a big hole in it so back it went to the store. These purchases were headaches because they did not pan out and wasted my time as well as the cost of return shipping in the first instance and the cost of return bus fare in the other two cases. If I look at it from a positive perspective, I feel like I saved myself from making about $300. worth of purchases. If I still need these items later (example the undergarments), I can purchase what I need later. I also learned that I will no longer be shopping at this one particular store where I had to return the items. It is not the first time I have had problems with purchases where I get something home only to find out later that something is missing from the package. It is regrettable as this used to be one of my favourite stores to get good value for the dollar.
~ I switched one set of bathroom lights to energy saving bulbs and I also have a new fixture which uses 3 bulbs instead of 8. I am not sure what the total cost savings is but I know there will be some. This is also a move toward green living. The only thing I am concerned about is the toxic mercury contained in the bulbs. I hope I never break one!
~I unplugged several of my appliances and now now I totally shut down the computer each night. Apparently all this saves energy (phantom energy use).
~ There were a few days that it was quite cool in my home. I turned on the ceramic heater rather than the household electrical heat. This little heater is more efficient than the household heat and I can direct the heat to where I need it.

~ I haven't yet got around to asking for lower interest rate on my current credit cards and I haven't been able to find a 0% credit card like some bloggers write about when recommending how to get out of debt. However, I did find a credit card with 1% cash back and 1.99 % introductory interest rate for balance transfers. I don't usually go for these kinds of deals because the interest after the introductory period is usually quite high. In this case however, I get an introductory period of 10 months which I think is quite generous. So I'm going to transfer a sum of debt that I can pay off in 10 months and then not use this card at all except for perhaps paying utilities which would then get paid right away on the card. The only thing I did not like was needing to apply for this credit card because it will affect my credit rating but I felt I could save on a lot of interest payments over the 10 month introductory period. The key will be making sure I don't use the credit card other than for saving interest on paying down my debt.
~ I was able to save $10. on Celadrin, an herbal supplement I wanted to try for aches and pains of arthritis. 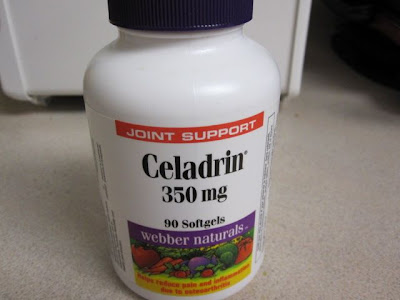 ~ I returned bottles to the bottle depot ($1.70) and saved another 80 cents in posting a parcel and sending a Money Gram. I added these small savings to my new Snowflake Jar fund (see sidebar to the right). This fund was started by gathering my loose change from January, February and March. Most of what I add to this fund will be from bottle returns and a little loose change here and there. As of today the Snowflake jar contains $19.79 Canadian.  When I have built up this fund to $200, I will use it to start a micro finance project for a woman in Kericho, Kenya under the  auspices of the Missions of Hope.
~ I saved $2.75 on a bus fare yesterday. The nice bus driver saw me loaded down with bags of food and he let me take a seat without putting my money in the token box. That was a blessing :-). I purchase tickets for the bus so this saves my ticket for another day's use.

All in all, I am pleased with what I was able to do this month. I will endeavour to keep up the small steps each month to save money, reduce debt and reduce energy consumption.
at March 29, 2010