The End of an Era, The Beginning of a New One

- May 04, 2010
Tuesday, May 4th at approximately 11: a.m. the BC Place Stadium dome was purposely collapsed. Over the next 3 weeks it will be methodically removed from the roof top and sent to recycling.

Just over a week ago I showed you a photo of the dome on  my walk to Granville Island. (Click the underlined words if you want to read about the walk). Here it is again. It is the white roofed building nestled between the high rises.   BC Place recently had prominence as being the venue for the Winter Olympics 2010 Opening and Closing Ceremonies and over the years it has hosted many spectacular events in the City. 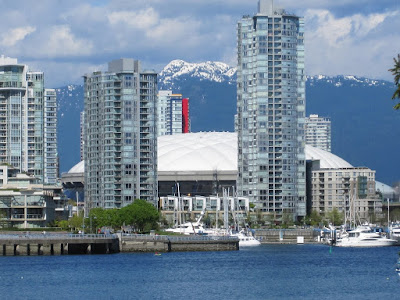 This is what the dome looked like after collapse.


I hadn't even realized that the roof was going down today. It was a bittersweet moment. The original dome was built in 1983 at a cost of $126 Million.

After spending $5000. on my portion of my condominium building's roof replacement, I am not feeling up to spending my portion of $475 Million that will need to be paid from taxes.

Is there any large tax funded project where you live that you had to pay for whether you supported it or not?
2010 Olympics BC Place budget Vancouver Vancouver landmarks