What's Happening in My World?

We had another major storm pass through on the weekend. The winds were howling for two nights. I saw on the news that ferries serving the islands off of Vancouver were shut down due to the bad weather and power was knocked out in many places.  I was snug inside and safe from the storms. I was blessed that my power didn't go out at all.

The small amount of snow we had was washed away by the rains and the temperature has warmed up considerably.  I spent the blustery day yesterday making progress on  my goals.

One goal is to finish the baby afghan. I had started out making dishcloth squares in a new-to-me pattern.  One of the ladies in my knitting group suggested I sew them altogether into a baby afghan and I thought that was a great idea. I made about half of the squares last Fall and finished the other squares today. I just have to decide on which colour to use to crochet all these squares together with and I'm leaning toward a cream colour. I also like the blue in the yarn. 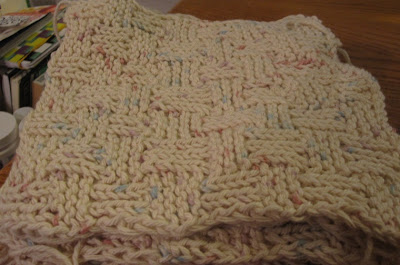 I am still a newbie knitter and have only made dishcloths and slippers. I needed to make enough of these squares to practice the stitches but I see I still need more practice*smile.

I also started my second paper book over the weekend (I have a few electronic ones on the go) entitled, Paris, 1919 by Margaret MacMillan.   This one I've had in my library for awhile now and thought I'd better get at it. 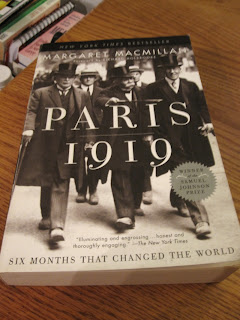 Margaret MacMillan's Paris 1919 is a colourful, epic history of the momentous days after World War I that saw U.S. President Woodrow Wilson and the other Allied leaders reshape the world. Wilson arrived in France to referee the Paris Peace Conference only a month after the war's end, sailing into a French port past an avenue of British, U.S., and French battleships. The world, horrified by the millions of war deaths, was desperate for peace and embraced Wilson's call for a League of Nations and self-determination for all peoples. Enthusiastic European crowds greeted the U.S. president and posters bearing his face lined the streets.

It was a conference unlike any other in history: attendees redrew borders, rewrote international relations, and tried--unsuccessfully--to contain German militarism. It unfolded in the midst of massive social upheaval as Europeans awoke to widespread hunger and the inequalities of their age. In the pressure cooker of Paris, this bubbling stew of social and political forces boiled over, and many of Wilson's dreams were dashed. The world lives with the legacy of these few months. Not only did the conference produce a new map of Europe and the Middle East, it led to the infamous Versailles Treaty, often blamed for provoking World War II. MacMillan, a University of Toronto history professor, argues that the Allied leaders did their best, and to blame World War II on them is to absolve Hitler and his appeasers. MacMillan could perhaps be accused of bias: her great-grandfather was British Prime Minister David Lloyd George, one of the main political players in 1919. However, her book has been acclaimed by historians and has won Britain's richest nonfiction award. Complete with backroom intrigue, personal drama, and vivid characters, Paris 1919 is a vital contribution to our understanding of the last century and the current one. (Source: Amazon).

I picked this book up several years ago because I was fascinated to learn that political leaders of the day redrew borders. I didn't learn this in history class. I'm not sure why I waited so long to begin reading it other than I have so many books in my library that I have yet to read and this is just another one. I'm sure I will learn a lot from it.

Email ThisBlogThis!Share to TwitterShare to FacebookShare to Pinterest
Labels: goals 2012, hobbies, Our World, Our World Tuesday