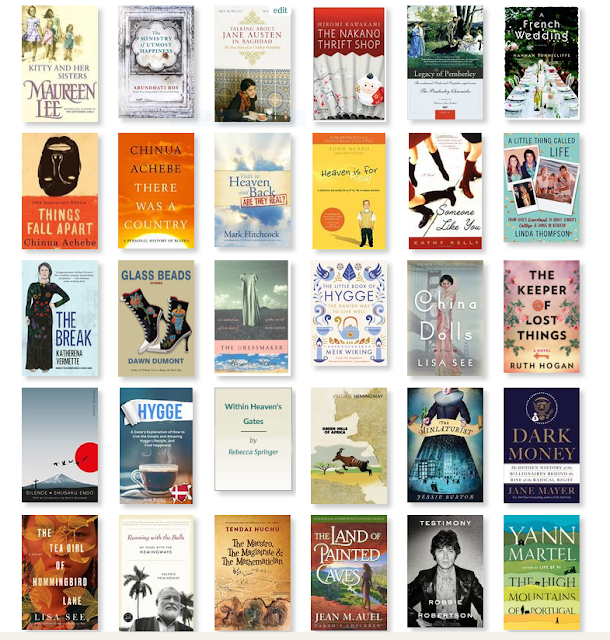 I'm so excited to be able to say I've met my reading goals for the year.
It was an eclectic mix of books for sure.

My official reading goal is modest . I've only selected 35 books for the year.
I already have a few more books on the go but these are various coloured icing on the cake :-)

I hope all is going well for you wherever you are.

I'm so pleased to know that many of my blog friends in Florida have now reported they are safe after Hurricane Irma and they all came out reasonably unscathed. Thank God for that though I am still waiting to hear from one friend in Orlando.

Hurricane Irma also left many Canadians  stranded in the Caribbean.  Some on holiday but also residents and seasonal residents, students and business people.
Canada has airlifted 1,652 citizens out of the Caribbean since Saturday, according to the latest figures from Global Affairs.
Some Canadians are unhappy that the government help arrived a bit later than the help for the citizens of other nations. Some are thinking about those who travelled to these hurricane prone countries even though there was a severe travel advisory against travel. I'm sure there will be much more in the news to come.
(Source:  CBC News, September 13, 2017)

Closer to home the wild fires still rage across a good part of my province, next door in Alberta and farther east in the Province of Manitoba.
Yesterday, the BC Wildfire Service reported that as of September 12th, there are still 136 wildfires (over .01 hectares or larger) burning in the province.
So far in  the fiscal year 2017, the province has seen 1,246 wildfires burn 1.28 million hectares. That compares to a 10-year average of 154,944 hectares burned.
(Source: The Georgia Straight, September 12, 2017)

Weather here is quite a lot cooler than it was a week ago. I'm needing a bit of adjustment as I'm still using summer covers and have my windows wide open all night.  Last night for the first time I felt a distinct chill and a cramp coming on. Reluctantly I realized it is soon time to change out the linens and blankets change my habits a bit to accommodate the cooler climate.

The days are beautiful and sunny though I realized last night that the sun sets over 2 full hours earlier than it did in the middle of July. I miss the longer days but Fall is one of my favourite seasons.
The only thing I don't like about Fall is that Winter will arrive soon and it seems to be a longer season than Fall, Summer or Spring! 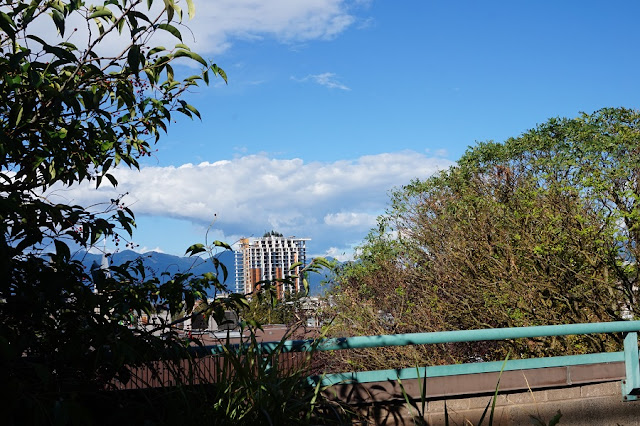 I haven't had time to clear out the garden.  I've decided I will probably just leave it until the Spring.
Joanne from Cup on the Bus,  reminded me that the birds can come and eat over the winter if I leave my garden as is.  It makes good sense given that my city is not usually covered in snow for very long.
I know in previous Winters I have enjoyed watching the birds come to peck around in the garden and am always grateful then that they have a garden to come and peck around in. 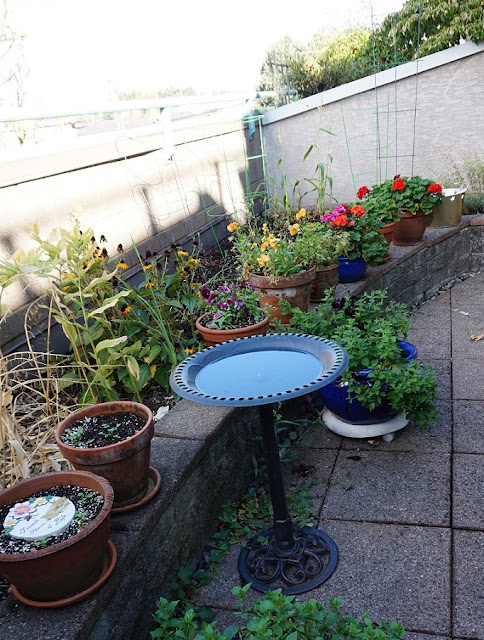