Air Quality and Other Things

My niece has been gone for about a week and I've been trying to catch up with things. It seems I'm doing loads of laundry, lots of dishes, a bit of grocery shopping, a bit of reading, a few personal care appointments (foot reflexology and body massage) and connecting with friends near and far. It's been steadily busy but not so hectic.

The air quality all week was very bad as the state of emergency and the wild fires continue around the province. Today I read that it is the 2nd worst year for fires and poor air on record. Last year was the worst. Our provincial premier said a few days ago that these kind of summers might be the  "new normal". That's not a good thought.  The following photos show the recent skies.

At the same time as the poor air quality has been occurring, I've been tracking earthquake activity around the globe. It's scary stuff but one has to try and be prepared when they live in the earthquake areas.

In the past week alone there have been over 70 earthquakes around the globe. Two of them have been closer to home (off the coast of Oregon and off the coast of northern Vancouver Island). Every Sunday a fellow who calls himself "Dutchsinse" on You Tube predicts earthquakes.  He posts 3 videos a day and on Sundays he posts a vlog forecasting where he thinks earthquakes will hit over the next 7-10 days. The "experts" say that they cannot predict earthquakes and that there is no credibility to what "Dutchsinse" is doing. However I would say that if you watch him yourself and track things each week you will understand that he is on to something.

Little by little too his theories are being confirmed by research.  Most recently by the University of Oregon. Click here if you are interested in that study.  If you are interested in following him or at least listening once click here. His motto is "Don't be scared, be prepared" and his aim is to educate people to be aware and be prepared if there is an earthquake alert for their part of the world.  As for me I've been on a mission to let my loved ones, friends and professionals I deal with know about the potential earthquakes. A lot of people don't like to think about it and would rather pretend it won't happen though one young Brazilian lady I know told me that a number of Brazilians she knew who resided in Vancouver, have opted to return to Brazil.  At least Brazil is not located along the Ring of Fire so the likelihood of a huge quake is much lower. In  my household I've dragged out my emergency kit and bag of things I would need in case of emergency. It was a few years ago since I prepared it and I need to change out the water and the food.  Since I last updated my kit I've noticed that the earthquake preparedness store has moved to an area where I never go.  That means I have to plan specially to go and get what I need.

A few weeks ago I wrote that I now am a fan of meal planning and batch cooking. I've pretty much used up the fod I prepared in batch cooking last time so I need to get started again.  Having my niece visit put me a little behind schedule but it's okay. I now need to get into some much healthier eating once again. While she was here I just let her enjoy her holiday and we had all kinds of food that are not really the the healthiest. It's okay because she is only here one week out of 52 and I do try to incorporate some healthy salads and fruits and vegetables during the week as well.  Meal planning and batch cooking are not yet habits for me and to make them into habits is going to take some consistent planning and time.

Today is a busy but good day.  I'm folding laundry done earlier in the week, vacuuming, washing dishes and floors and making dinner.  Later, if I am up to it I have some paperwork business to catch up on. Alternatively I will wash all the fruit and vegetables and store them for use in batch food preparations this week.

My reading has slowed down a lot though I've read

The Night Visitor by Lucy Atkins

Right now I'm slowly working my way through The Gate of Angels by Penelope Fitzgerald.  I'm reading because it came in a book of 3 novels in one.  The first book I read in the consolidation is The Bookshop.  I didn't like that one so much but it was better than the one I'm reading now. Truthfully I'm finding her books rather boring and unappealing on many levels (did I really say that?).  But I like to finish what I've started and I hope to finish all three books though I'll do it slowly.

I attended a festival yesterday called Harambecouver. They had an excellent line up of performers but it rained heavily early in the day (the first real rainfall in months) and the turnout was dismal. Perhaps the festival lacked promotion too and as this is only it's 2nd year they are still learning what to do.  I spoke briefly with the festival organizer and he mentioned moving the festival up by a few weeks so as to avoid the rains we usually experience in Vancouver from mid-August onward.

I went with friends and we stayed only an hour or so and had a bite to eat. When we were leaving my friend's son ran up to the stage to listen to a performer sing "One Love".  he wanted to dance. When he came back he asked "did I dance good?" I thought that was so cute. 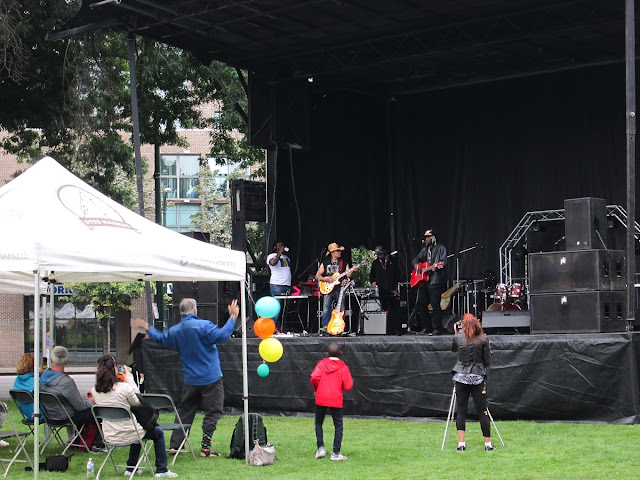 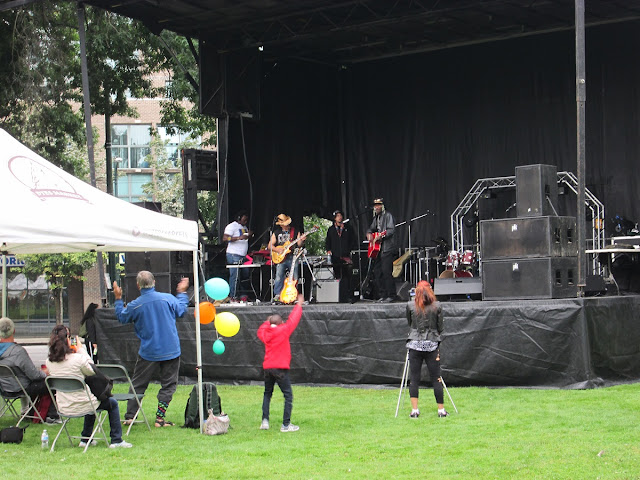 Here is his mom, his brother and a church friend watching him dance from afar. 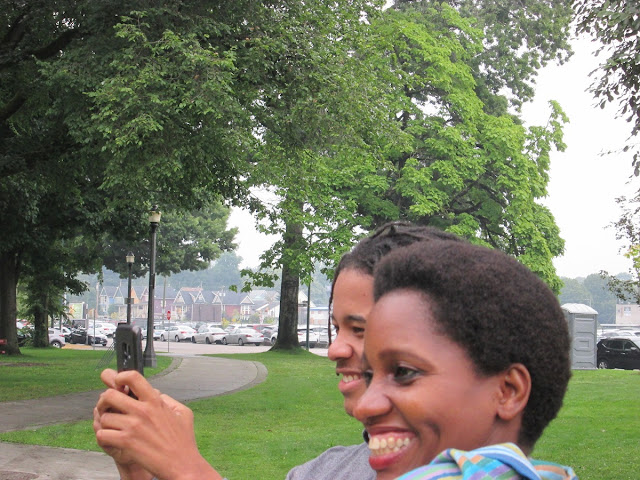 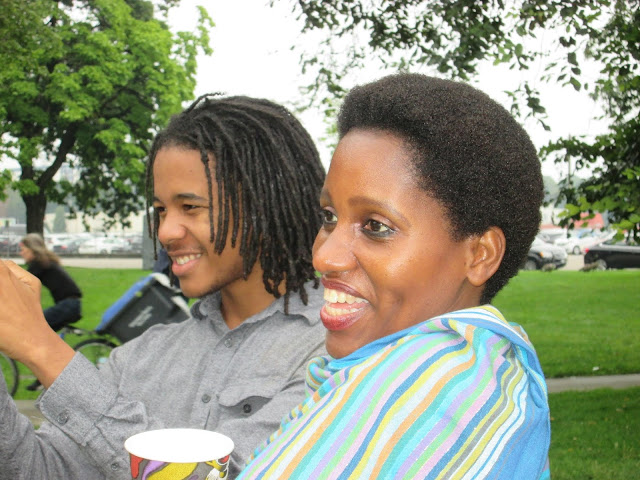 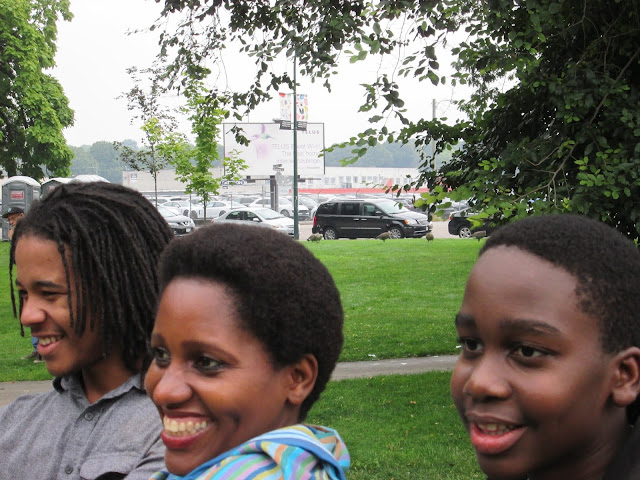 Here is his dad. 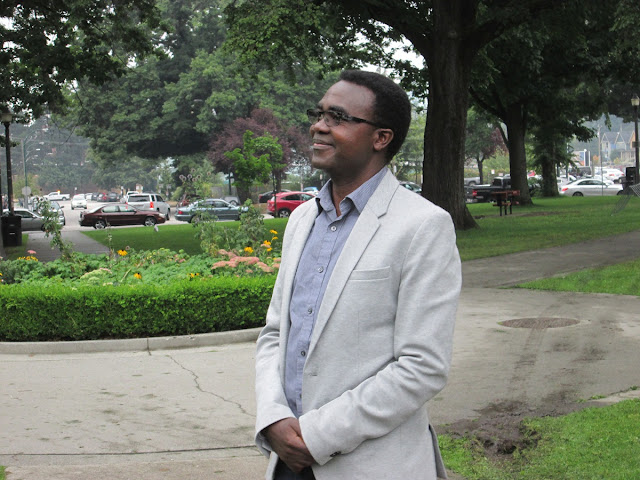 And, here is the young boy having a well deserved drink of juice.
I couldn't get a good shot with my old compact camera. 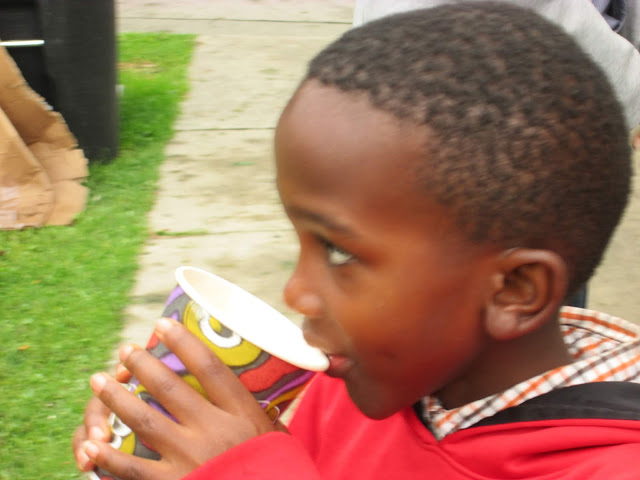 Sunday dinner is traditional roast chicken with red potatoes. It's a lazy dinner so I can work while the dinner was cooking. I also picked a few strawberries from my garden. I'm not up to making salad today so this will be it. I did roast a few onions and carrots under the chicken. Normally I roast until the all the skin of the chicken is browned but I felt I had the oven on long enough so I aborted roasting once the fowl was cooked through and the potatoes soft. 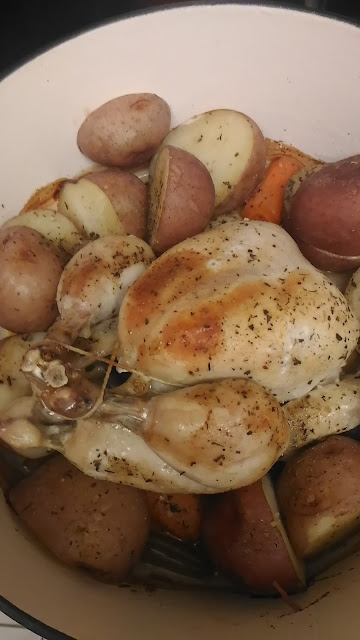 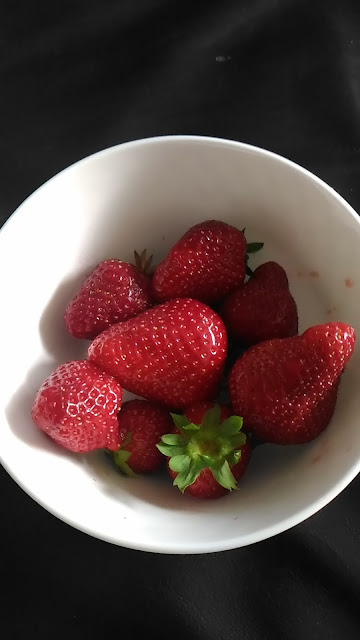 
One final thing before I go.

You may have noticed I changed the theme of my blog. I like it but am not sure how long I will use it  because there seems to be a glitch in the template.
The preview function doesn't work and so that makes it hard to check on photo placement, spelling errors and so on. I'll wait awhile and see if that gets fixed before deciding whether things have to be changed again.
I'd be interested in what you think of this format.

In closing, air quality here is not expected to improve this coming week and the temperatures are expect to climb again.

I hope you are keeping well wherever you live.
Thank you for stopping by!

Update: I think my blog has been hacked or hijacked.  Either that or there are numerous issues with this template making it a pain to use.
If I cannot resolve this I will have to start another blog from scratch.
I'm not sure how much time this is going to take me.
Another update:  I discovered that the Contempo theme which I'd tried to use has some glitches when it comes to use of widgets. I found out I wasn't the only one with this issue and once I'd deleted some widgets I could access the templates. So far I've had two comments about the new new blog format and I appreciate them. I reverted to the original them with a different background and header as I too wasn't quite happy with the Contempo theme and don't have time to learn how to tweak the html code.
My apologies and thanks for bearing with me as I try to correct and improve things.
at August 26, 2018