Hi everyone,
I was reflecting this week that it was almost 6 months ago when this Covid scare began and the business of  self-isolating.  For the most part I've been okay and have not needed to do more than go out for food and medications. I did not go to the community garden much at all though I had planned to do so.  Things may change a bit in the next few months as at some point I'll need to have a doctor's appointment, a dental appointment and perhaps a minor hospital procedure and I really should go and get some lab work done.  But have no desire to expose myself to new people and new germs any more than I must  The hospital has been calling me to schedule a procedure on a non-urgent basis and I've basically been avoiding the calls. I will try and give them a call next week. 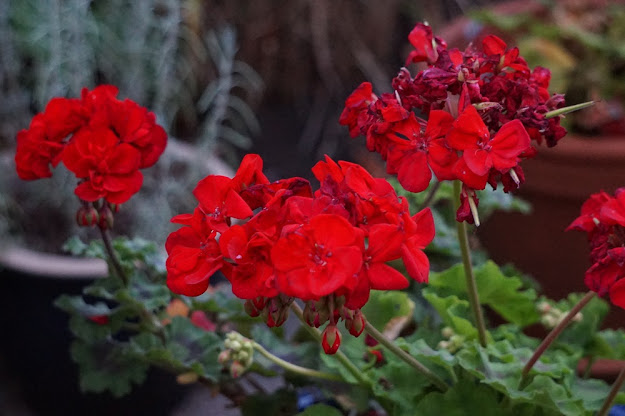 I've been thinking that it will be at least another 6 months before we can really get out and about and or even contemplate travelling. I thought I cannot go an entire year without seeing anyone in my circle so I'm hoping to organize a day here and there to visit with a family member and one or two friends.  Of course we will visit and keep our distance for safety reasons.
In some of my more recent posts I said I was going to adopt a (rescue) cat.  My application was accepted at one organization and I actually had virtual visits with 3 different cats.  Then I began to get cold feet. It thought it would be better if I met the cats close up and personal instead of just virtually.  That would mean two trips 1) to see the cat and 2) to pick up said cat. In the end I decided to wait until the 2nd wave of Covid 19 is well behind us. In the meantime I have a lot of jobs that continue to keep me busy.
Over the summer's cooler weather I've been catching up on paperwork and decluttering.  In between I read books or I cook and do a bit of cleaning.
I'm reading books 42, Book of Signs by Dr. David Jeremiah and 43, The Widows of Malabar Hill by Sujata Massey.  My goal for 2020 is 45 books which I'll likely reach in August.  At that point I hope to redirect my focus to crafting and sewing.  I also have more paperwork to get rid of before I can commence some small house projects. I wanted to finish the house projects this summer but now I may not get to them until 2021. The interior light is not good once summer is over and so some things are better left until Spring.
Last week and again this week the summer heat finally arrived.  I spent some time doing more intensive cooking than usual. I like easy dishes in general that don't require a lot of standing at the stove but sometimes I feel like trying new things. The rice pilaf and tuna steak were 'new to me' dishes and both were tasty. 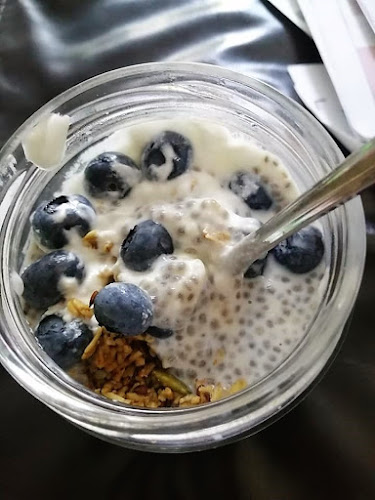 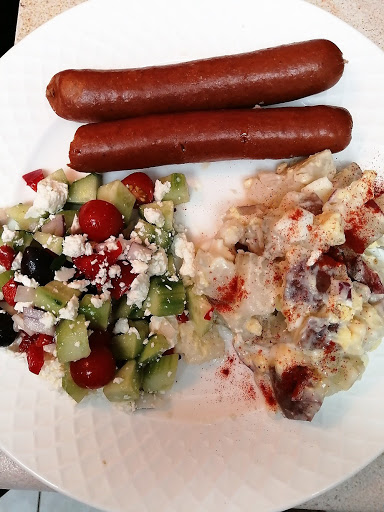 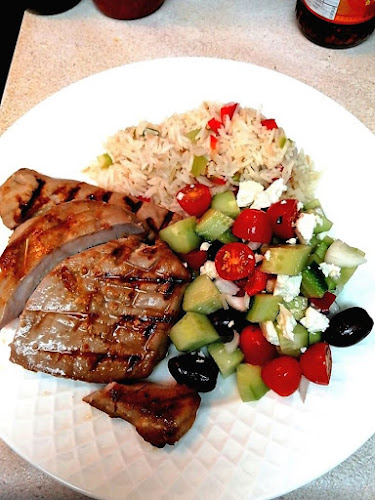 Grilled tuna steak, rice pilaf, Greek salad
I took the following photos after 9 p.m. Tuesday night. The light was already insufficient. I tend to get better photos around sunrise. 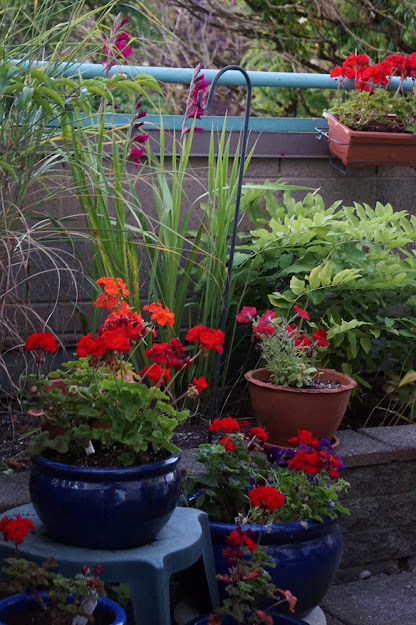 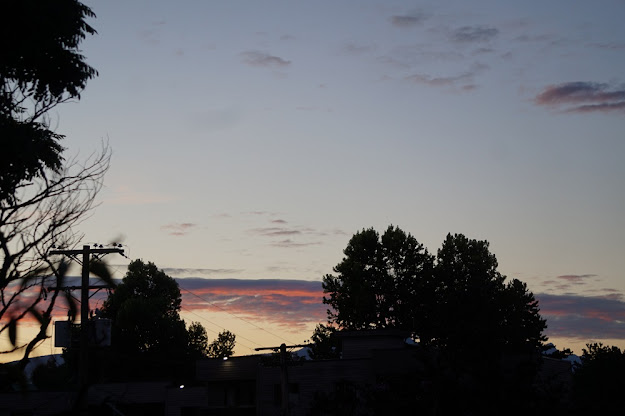 The next set of photos were taken on Thursday evening.
I love the golden colour in the sky. Usually I only see this hue in the very early morning hours. 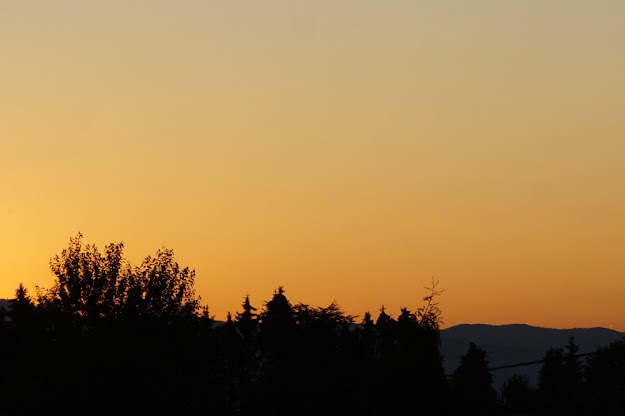 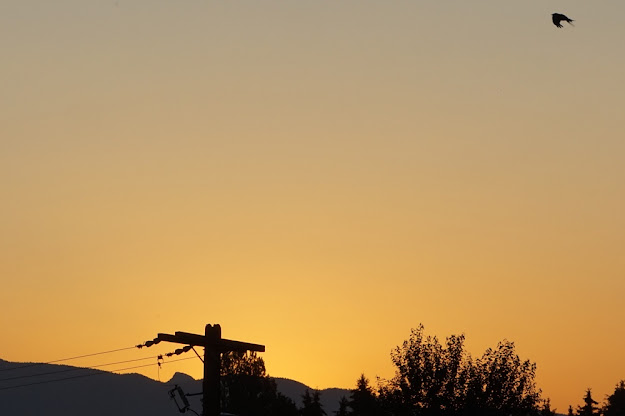 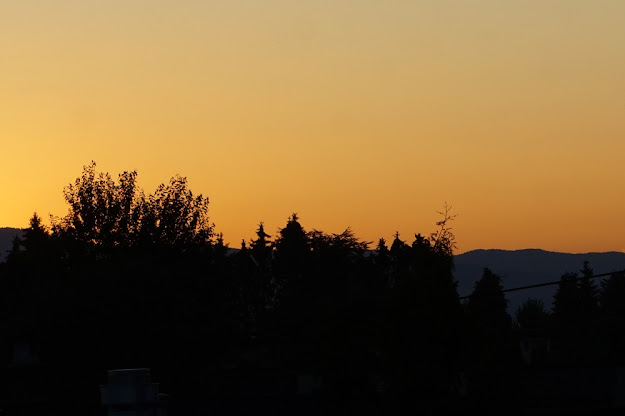 The Kenyan Missions
Since my last post, I learned that the primary crop we planted (corn/maize) won't be ready until October since we planted several months later than the norm.  Those who planted in January have been harvesting over the past few weeks but we did not plant until much later.
In Kenya, the farmers plant and harvest corn and then they dry it in a shed.  Preferably a shed on stilts because it helps  with air circulation. Corn can get green mold or aflatoxins in the field or in storage and researchers have discovered that these aflatoxins are contributing to male infertility. Throughout the year the people take their dried corn to the posho mill to have it ground for unga (flour or maize meal). This maize flour is then made into ugali, a staple of the Kenyan diet.
Ugali is not really nutritious but it is a common food and it helps to fill the belly. It is eaten virtually every day for the main meal and on a modest diet will be eaten with greens or sukuma wiki (fried collard greens though the Kenyans usually refer to it as spinach).  If the budget allows there might be chicken or beef stew as well. For a real treat at Christmas there might be goat meat.
Regardless of the issues with corn or ugali, Kenyans absolutely love ugali and they crave it just like in North America people where people may crave rice or potatoes. If you google the nutritional aspect of corn flour it sounds rather nutritious and perhaps it is relatively nutritious in the scheme of things. But when it becomes your primary source of food and there is little else that goes along with it, I think it leads to a malnourished society. I'm not a scientist but I'm finding that a lot of the adults we've been helping with medical needs are highly malnourished and it leads to challenges in trying to get them healthy again. First they have to have a much more nutritious diet on a consistent basis before they can start to get better. In fact, many Kenyan doctors now recommend their patients to take vitamins or eat a certain array of foods. This is all very challenging if you are a subsistence farmer. There isn't money left over for much else besides one's daily meal. 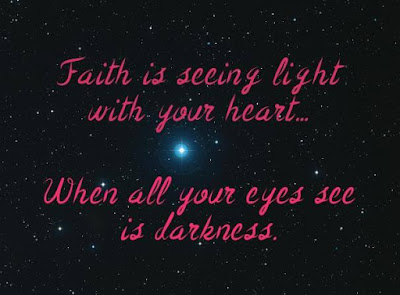 I'm not sure when I will write again.
It will depend on when I can get some new photos and have something newsworthy to share.
Until then, take good care of yourselves.
Joining in with
Skywatch Friday.
at July 29, 2020

Hi everyone, I was reflecting this week that it was almost 6 months ago when this Covid scare began and the business of  self-isolating.  Fo...

Some kind people like to donate to the Kenyan missions and outreach. If that's you you can direct Pay Pal donations or queries to
kerichojoy@gmail.com
Pay Pal can be found at https://www.paypal.com/ca/for-you/transfer-money