In my first giveaway which you can read about and enter here, several of you said you would like to see and know more about the city where I live. Lynne from Canberra said she would like to know what sights I would take her to if she came to visit. So here is my first post on the "touristy sights" of Vancouver. My home by the ocean.

If you were to fly in to Vancouver, stop into port on a cruise ship or stay at one of the downtown hotels, one of the key places you would likely visit is Gastown. I had to go there today as I was looking for a particular kind of Valentine's Day cards for my niece and I haven't been able to find them. Yesterday, I had one more recommendation as to where I might find these cards so off I went to Salmagundi's in Gastown. Unfortunately the shop didn't have the cards I was looking for but it made perfect sense to stop there as it was enroute to the St. Paul's Hospital where my cousin's daughter is having major heart surgery tomorrow morning. I wanted to stop in at the hospital and sit with my relatives for awhile before the big surgery event later this morning.

Here is the entrance into Gastown from the western side of this tourist area. You can see the pavers on the sidewalk, the Gaslight style street lamps and the cobblestone streets. This is one of the oldest parts of our city. It is a beautiful area with character buildings, tourist shops, interesting shopping experiences with both a local and a global flavour and some excellent restaurants. You will also find a wonderful collection of northwest coast art and other native handcrafts, as well as a lot of other uniquely Canadian creations. For example, you will find smoked salmon pate and lox as well as the world famous maple syrup and maple sugar candies. 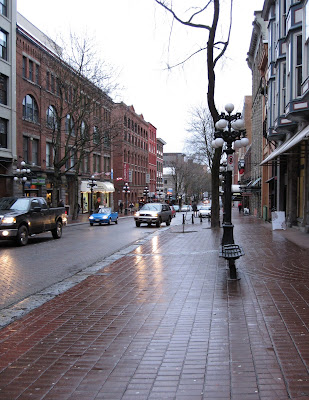 Gastown was established in 1867, which is also the year of Canada's birth as a nation. This part of town is on the south side of what is called Burrard Inlet (see on the map below). In those days, this area was a wilderness with only a sawmill in the area and the mill owner did not permit any alcohol on the grounds.
One day a man named Jack Deighton came to town. His nickname was "Gassy Jack" because he loved to talk and could spin a lot of tales. He arrived with a barrel of whiskey and he promised the mill workers that he would serve them drinks if they would build him a saloon. It wasn't long before a saloon was built in the area. Thus Gastown was born.

Just down the street from where the first photos are taken is a steam clock. It was first built and erected here in 1977 after the area underwent a revitalization. The clock was designed and built by Canadian Raymond Saunders. His clocks are also displayed in several other Canadian cities as well as Otaru, Japan and Indianapolis, Minnesota in the USA. The clock is a great tourist attraction in this part of the city. Visitors come from all around to watch the steam emitting from the clock; much like they flock to Prague's Astronomical Clock in the Old Town Square. 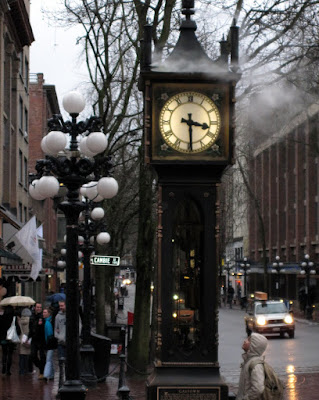 Gastown has had a rough and tumble reputation and has gone through many incarnations. In 1886 Gastown was incorporated as the City of Vancouver, named after Captain George Vancouver, a British Explorer. Sadly, just a few months later a brush fire burned out of control and brought the city to ruins leaving all but 2 of it's buildings in ashes. In the 1920s and onward,Gastown prospered but when the Great Depression hit, the area fell on very hard times and the area became a skid row. In the 1960s a group of people saved the area from demolition and obliteration and it was reborn and recognized as a dedicated Heritage Site in the early 1970s.

In the photos below, you will see a small sample of the many tourist shops that sell memorabilia to remind visitors of Canada and their stop in Vancouver. 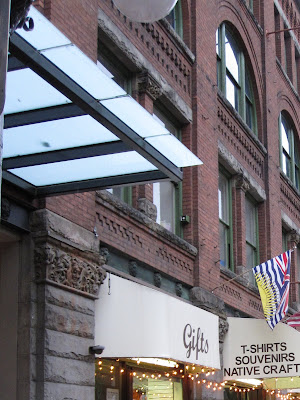 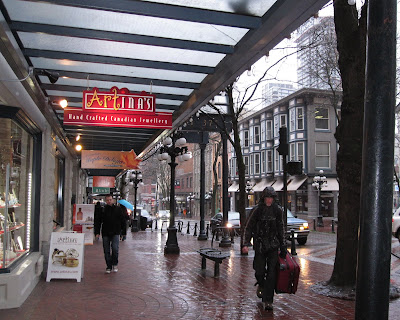 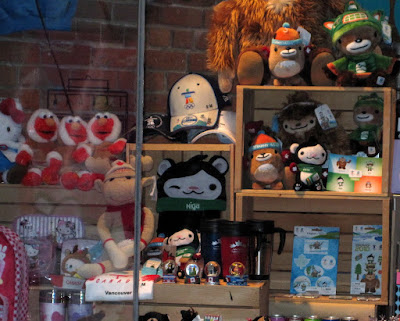 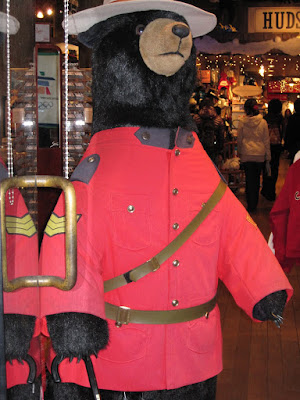 I hope you enjoyed your short tour of Gastown and that you will visit again soon.