- January 22, 2010
I grew up in the far north where traditionally my people lived on wild game and fowl, as well as made bannock (for bread). We didn't grow up on milk, green vegetables and fruits like many people take for granted today. One of my favourite wild meats is moose meat.  I've also eaten deer meat, beaver, bear, wild rabbits and a wild bird whose name escapes me at present. Mostly though I loved to eat moose meat. Moose steak in particular with boiled potatoes and bannock. My mother could cook moose steaks that were so tasty. She used just shortening and a little salt. I featured bannock in a blog here.

Nowadays so many of the people that hunted and that I knew are no longer alive. Sadly with their passing, the knowledge and skills or interest in hunting has also dramatically decreased in my community.  That basically means I get very little wild meat to eat and when I do it is a real treat.

Moose is a very lean animal and when you cook it you must be careful not to dry it out. The moose is a very large animal. I've posted a picture below (I didn't take this photo and I'm not sure who did) and you can learn more about this beautiful and wild animal here. 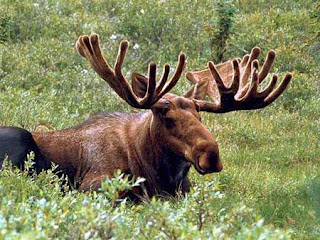 You can imagine how blessed I was to be the recent recipient of some wild game just before Christmas. I won a picture in a raffle organized by one of my friends, Rose. I gave Rose some funds to support her fund raising raffle and asked her buy me some tickets for the food basket that contained some wild meat. Instead I won a huge picture! Was I disappointed or what.

Apparently the picture was much coveted by another woman at the church raffle and she was very disappointed that a stranger won the prize she coveted, lol. It turns out she was the woman who donated the wild meat for the food hamper. Unbeknownst to me, Rose approached this woman and told her I might be interested in a swap. Indeed I was if it meant I got to have some wild meat!

Long story short, I got the meat and the other woman got the picture she wanted. I guess she wanted it for a Christmas gift for one of her grandchildren. In the bag of meat there was minced moose (like hamburger or minced beef), a package of moose stew meat and some bear chops. I took the bear chops to mom at Christmas and next time I visit I hope to cook them up.

Yesterday, I got to use the moose stew meat in a simple recipe but it was so delicious.

- about six cups of water to boil
- pieces of moose stew meat (about 1.5 pounds)
- 3 potatoes, peeled and chopped
- 1 medium onion chopped
- 1 large carrot, peeled and chopped
- 2 tablespoons of vegeta (vegetable seasoning) to taste
- salt to taste
- flour as needed (approx. 1/2 cup) to coat the meat before frying and to thicken the stew
- coconut or other shortening/oil to brown the meat before stewing
- freshly cracked peppercorn for garnish
First chop up the stew meat into small cubes about 1/2 -3/4 inch square; coat with flour and brown in a hot frying pan until nicely browned. Most of you have already made stew but just in case you haven't, make sure you turn the meat so that it doesn't burn and so that the loose flour in the pan doesn't burn.

In a stew pot, boil some water and add the salt. Once boiled put in the chopped veggies (carrot, onion, pototoes and the browned meat). Let the mixture boil and then reduce heat slightly until the vegetables are cooked.

In a small bowl mix, remaining flour with a few tablespoons of water until it is a mixture of medium consistency. You don't want it too thick or too thin. Add the vegeta or vegetable seasoning to it and slowly stir the mixture into the stew mixture. Stir the post constantly so that no lumps of flour form in the broth.

Cook (the now completed stew) for another few minutes. Serve in a bowl and add freshly ground pepper for garnish.

Note: I just learned that vegeta has an ingredient called monosodium glutamate (MSG). Not a good thing for many of us with MSG sensitivities. I'm going to have to find a substitute. I actually have other seasonings like Mrs. Dash.

I know that there are many reports that say MSG is safe, however for those of us with sensitivities, even small amounts can be unsafe or lead to symptoms which we do not need. For example, I find when I eat Chinese food with MSG, I break out in hives under my eyes. Fortunately the MSG in the vegeta seems to be a small amount. The only real side effect I've experienced is some swelling, which is bad enough really, isn't it? So please, if you try this dish with another kind of meat, you might want to consider your seasoning.