Welcome to my new follower, Diane from Food, Fun and Life in the Charente.
So glad to have you as my 50th follower ;-)

Don't get fancy. Have you cooked an apple pie? You don't know what you did wrong? Do this: Take two or three apples. Put them on a table. Study them.

Is there anything as good and comforting and joyful as a simple, home made apple pie?

I still don't have a pie pan so I made do with a spring form cake pan. I used this one because it is much smaller than the enamel dish I used last time I made pie. I think I'm going to have to invest in a pie plate if I'm going to continue to practise making pies. Overall though this pie crust was much flakier than the last one I made since I didn't have to roll the dough out so thin. 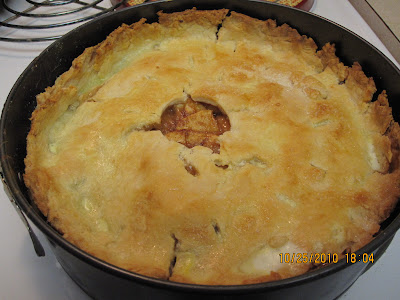 I took the pie dough recipe from the internet.

Lay 1/2 the pastry, rolled out to about 1/8" thickness, in the bottom of the pie pan and press it in gently to lay flat in the pan. Leave the excess crust hanging over the edges for now.

Place peeled, sliced apples in a bowl. Mix together the sugar, flour, salt and cinnamon. Pour over sliced apples and mix. Fill the pie pan with the apples and pat down with a spoon. Dot the filling with pieces of butter.

Moisten the lip of the pie pan with water. Place the top layer of rolled out crust over the filling, making sure crust reaches outer edges of the pie pan all around. Seal the edge and flute all around (see notes below for how to flute a pie edge).

Take a fork and prick the pie top in several places to create vents for steam to escape. I cut out some vent holes instead of pricking the dough. Bake for 50 minutes, until pastry is golden and the filling is bubbling through the vents.

Let cool a bit before cutting to allow the filling to settle.
Makes 1 - 9" pie. 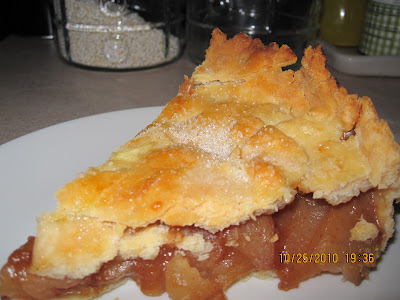 In order to make an apple pie from scratch, you must first create the universe.