The Journey Begins - Vancouver to Hinton

Many of you will know that I recently went on a road trip to attend the funeral of my aunt. It was a very long road trip with my brother doing all the driving.  Along the way we visited an my mom, her elder brother and a sister; all of whom live in different towns and cities.  Part of my decision to go so far at this time was so that I could visit my uncle (mom's brother) since he hasn't been well for some time and he is getting on in age.

Funerals can be very sad occasions, but for me it is also a time I like because I get to see relatives I haven't seen for a very long time. In this case, my aunt had just celebrated her 81st birthday and while that is not too old, she had been unable to speak for about 20 years after having suffered multiple strokes. In the last months, cancer had taken over and she stopped eating 21 days before passing. We look upon her passing as helping her to now enjoy better health in heaven.

We kept good records of the length of our journey and we covered just over 5000 kilometres.  I'm going to be doing a series of posts about our journey so I hope you will come back and travel with me. I will try to post some factual information of the different places we pass as well.

The first photos are maps. On our way north, through the province of British Columbia we passed through the town of Kamloops and then carried on through Vavenby, Avola, Valemount and  the world famous, Rocky Mountains past Mount Robson.   We stopped at Hinton for the night.  You can click on any map or photo to enlarge.

Here is a map of Canada so you can situate British Columbia and Alberta. They are Canada's two most western provinces.

The first photos I took were about an hour out of Vancouver. The scenery is always spectacular with the luscious looking and plentiful trees. 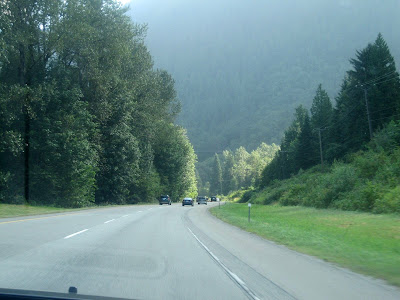 There are lots of mountain tops as we pass through majestic mountains which are part of the North Cascades.  The Cascade Mountain Range spans the border between the Canadian Province of British Columbia and the U.S. state of Washington.  They are predominantly non-volcanic but there are certain parts which are volcanic like Mount Baker, Glacier Peak and Coquihalla Mountain.
Officially these mountains are called the Cascade Mountains in Canada. 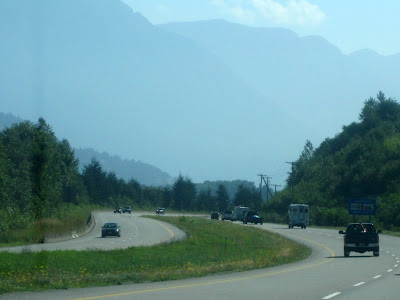 We are travelling northeast on on Highway 1.  This highway originates on Vancouver Island.  See the map at the top and you will see a large island to the west of the mainland of British Columbia. That is Vancouver Island.  We will pass by but not through many municipalities:  Port Coquitlam, New Westminister, Surrey, Langley, Cloverdale, Abbotsford, Chilliwack then Hope. I am not completely sure if I have these in order of location but they are more in order than not. 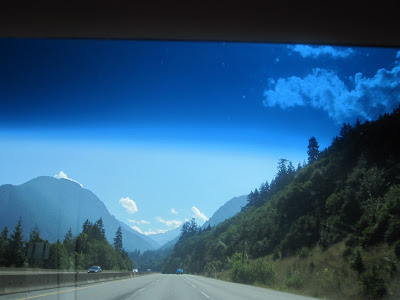 As we reach the town of Hope, the highway separates to take you to various points north and east. 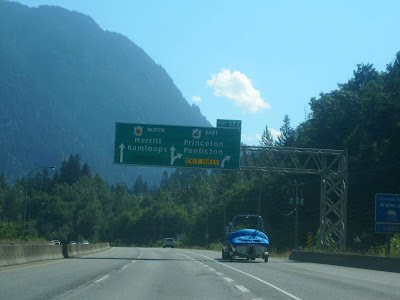 North of Hope we are travelling on Highway 5 or the Coquihalla Highway, often referred to as the "Coq", pronounced "Coke".  I've captured a sign for you in the photo below so you can see one of the many warnings given to driver. I also wanted to capture the wild alpine flowers for you. 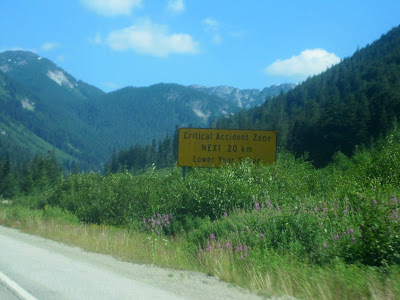 These mountain peaks always makes me catch my breath due to their sheer size and beauty. 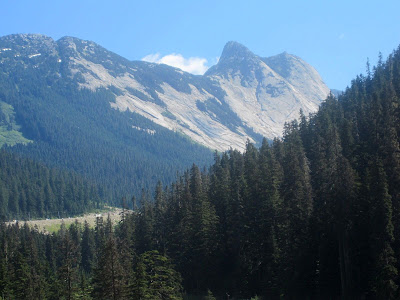 The photo belows show an avalanche shelter. Fortunately I've never experienced any avalanche when passing through here in winter.  Currently there is a  lot of road widening and improvement work being done between Vancouver and along this stretch of highway. You can see some of the signage just to the right of the shot. 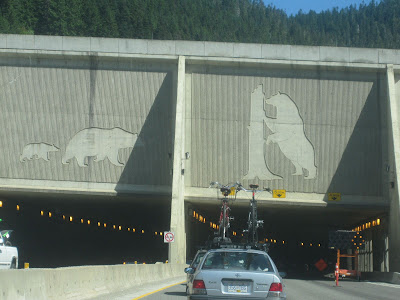 Another hour or so of driving and you can see the geography has changed quite dramatically.  We are now approaching the town of Merritt, British Columbia.  The town of Merritt is nestled in the Nicola Valley and has a population of about 7000 people. Glacial lakes are nestled amongst the grasslands where cattle also graze uninterrupted. This is pure cattle country and quite beautiful too if you like the semi-arid type of landscape. 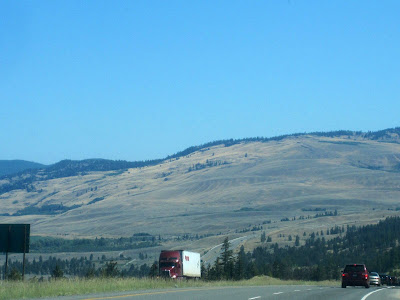 I tried to capture a photo of the town as we passed by but we were going too fast.  Merritt is always our last stop before we get to Kamloops. Here we take a short break stopping at an outlying place to grab a drink of coffee, water or soda for the final hour's drive to Kamloops. 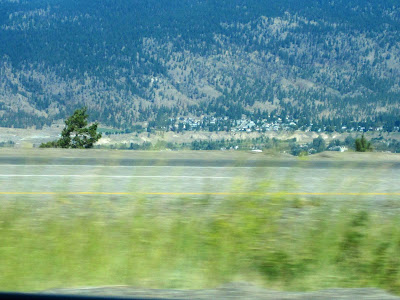 We are now in our final approach into Kamloops. 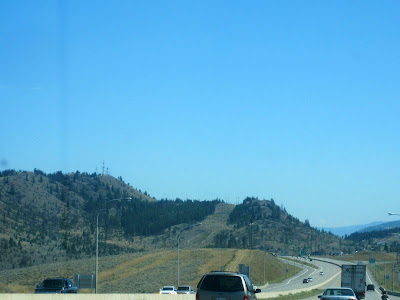 I always love arriving for it means a good portion of the journey is behind us!  We are making the approach into Kamloops from the northwest and we are at the top of the valley.  Kamloops is located at the confluence of the two branches of the Thompson River (north and south).  The population of Kamloops is about 87,000 people. I've noticed a tremendous amount of building going on over the past decade or more and one would think the economy was booming in the city. However doing some research I've read that the population actually declined in 2010, along with population declines in the town of Merritt. The reason is that people have had to migrate to larger cities to find work. Nonetheless Kamloops is a much bigger city than when my family first settled there. 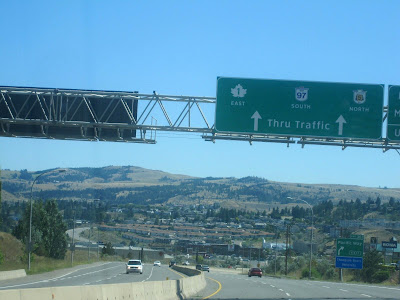 The scene below is one of my favourite scenes of the city as it gives a panoramic view of the two rivers and the main part of the city. At night, the sparkling lights make this a very pretty approach.   Here we stopped and visited with my mom for an hour or so before heading north on the Trans-Canada Highway. 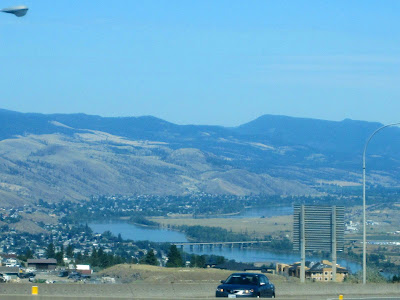 We pass a few very small places like Rayleigh as we head north. The first real small town is called Barriere. I took a photo of the surrounding hills.  There was a huge wildfire a few years ago now which almost wiped out the town .  You can see from the photo that the forest is still recovering. 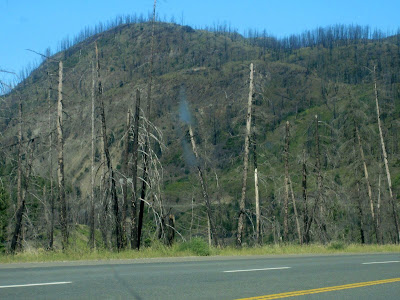 Barriere, British Columbia is located 66 kilometres north of Kamloops on Highway 5 which winds along the North Thompson River.  The community is 375 meters above sea level.

Legend has it that
"during the early days of the Cariboo gold rush, an old trapper named MacDonald, hailing from Scotland, was plying his trade in the central North Thompson Valley. Each winter he would stockpile his pelts at Little Fort. In the spring of each year, he would load up his pelt on his old mare, and with the help of a young Chu Chua Indian, he would set out on the old highway for Kamloops.
On one of his annual trips, the old man and his young companion stopped for lunch at the site of what is today: Barriere. Following lunch, the old mare refused to start up again. The old Scot gave her the buggy whip and she suddenly keeled over and died. His Indian companion said to MacDonald: "What  are you going to do now?" to which the old man replied: "Bury her". From which Barriere got it's name.
from a story re-told by local authority: David Baines

I took a lot of photos of this lake you see below.  It is called Moose Lake. I think it is very beautiful. The lake went on for miles and miles.

Well that concludes the first part of my journey. Please join in again for the next part of the trip through Alberta.


You can also join in for Scenic Sundays from around the world by clicking the badge below.