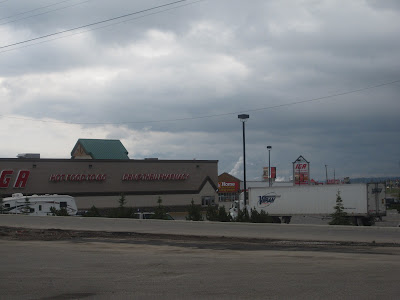 On the morning we were leaving Hinton we took a drive through the town looking for a place to have breakfast. We stopped at a fast food place then  made our way back to the highway heading north. We passed by the mall you see in the photo above.  The morning was overcast and a bit crisp and rain was threatening.

We continued our drive through a secondary highway to Grande Prairie in Northern Alberta. You can click on any of the photos to enlarge them. You will often see smudges and smears on the car windshield. When you are driving fast in the north, many insects and bugs hit against the car and make marks all over the windshield when they splatter due to the impact.  My brother kept telling me that it would add character to my photos when I complained of the dirty windshield. There was no point to clean the windshield because there is no way it would stay clean! 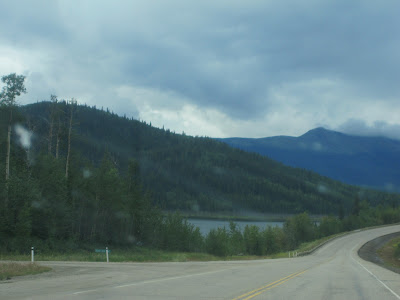 This stretch of highway was very busy with work crews who are widening the road though I didn't take photos of the workers. There aren't a lot of towns or cities along this highway just one place called Grande Cache. 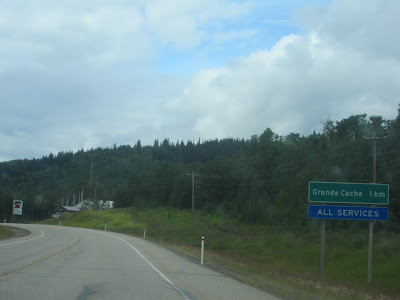 Grande Cache is the only real stop before you get to the City of Grande Prairie, Alberta which is where we planned to spend the night. So we stopped at this tourist information centre you see in the photo below and used the rest room.  I also picked up some maps and purchased a DVD entitled "Long Road Home" about the descendants of several Metis families who were evicted from the Athabasca Valley when the Canadian Government created the "Jasper Forest Park". 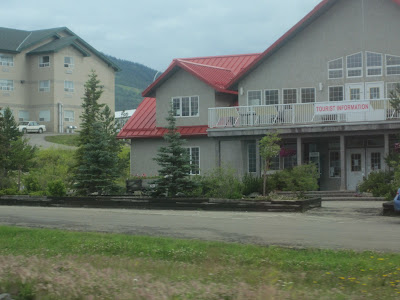 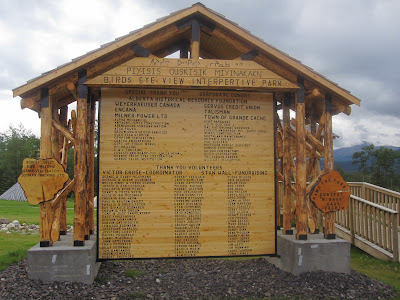 Then I took a few quick photos of these new looking wood plaque structures and teepees (tipis)  made of wood and canvas.  The tipis are the traditional homes of the Indian people in historical times. 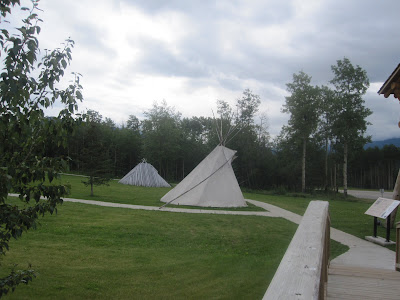 Then it was back onto the highway north. You can see the highway stretching for miles and miles. If you look at the photo below, the highway goes up the mountain to the left. 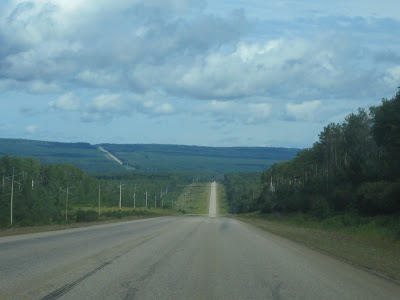 The area in the next photo is quite beautiful and as we descend into the valley we can see the Smoky River down below. I was to discover that we passed this river several times throughout our journey north. It is a major tributary of the Peace River and was given the name by Cree Indians. The name Smoky River describes "smouldering beds of coal in the riverbank". 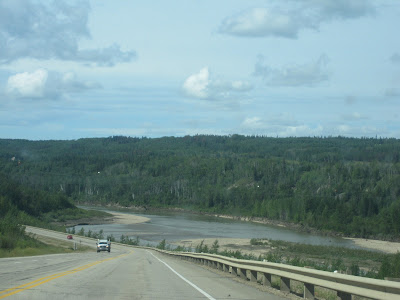 Now and then I came across these fields of hay for the livestock.  This sight is extremely typical of this area. 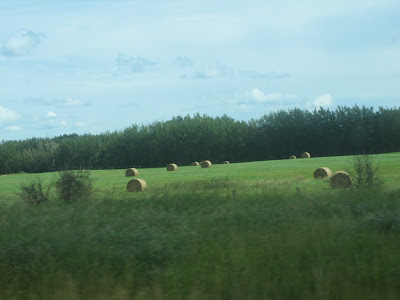 This signage was at the edge of the City of Grande Prairie. 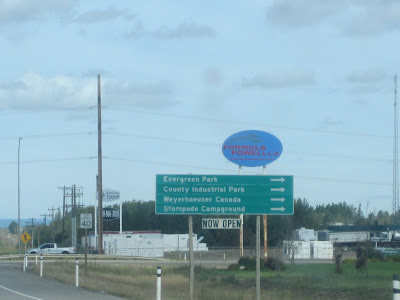 You can see that Grande Prairie really is on the prairie. The land here is very flat. The city is located on the southern edge of the Peace River Country and has a population of approximately 50,000 people. This city is among the fastest growing cities in Canada and it's major industries include oil and gas, agriculture, forestry, and food services. 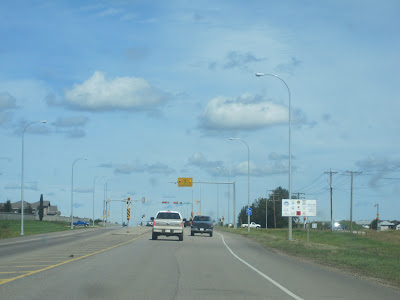 I didn't take many photos of the city itself just around the outlying approaches into the city.  The photo below is taken at the front entry to our hotel for the night, the Sandman Inn.  It was nice to be greeted by hanging baskets and there were colourful plants in planters on the ground also. 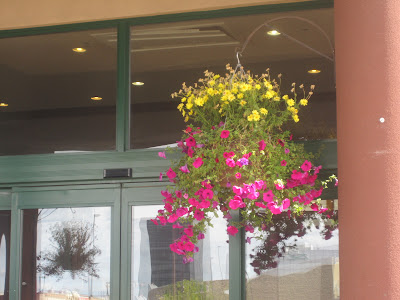 As soon as we checked into the hotel and had a short rest we set out again to the north to visit my uncle. 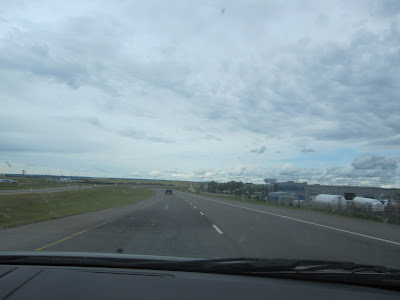 Along the way I saw that there is yet more road improvements being made.  In this case, culverts were being replaced at a bridge. 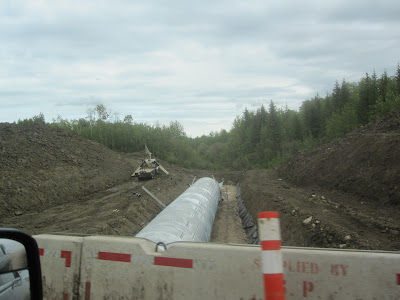 I wanted to be sure to take photos of the rolling fields and the crops as in the view below. This scene is very typical of the area. 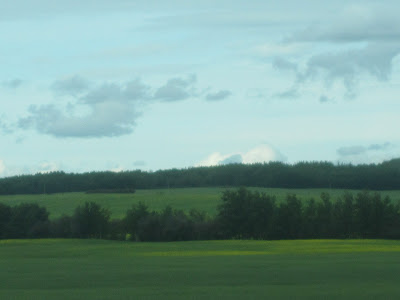 I cannot remember the name of the town photographed in part below but as we zipped by I noticed the large tipe (teepee) and I wanted a photograph.  The tipi (teepee) is the tall, pointed structure to the right of the photo.  It is oversized so it is probably a tourist attraction rather than a dwelling. 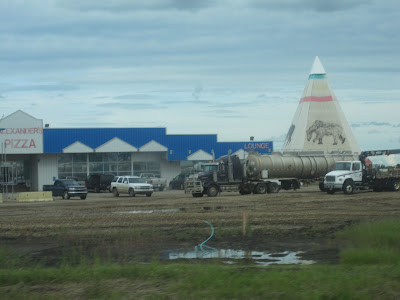 I took a lot of photos of signage along the way.  In Alberta there are numerous highways and small towns everywhere. 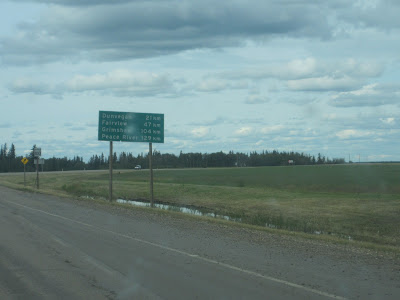 Once again we descend into a valley and pass by the Smoky River. 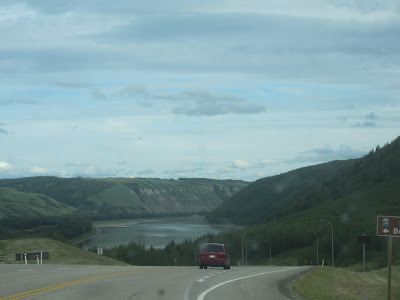 The scene below is another scene which is quite typical of the area around Grande Prairie and surrounding environs. 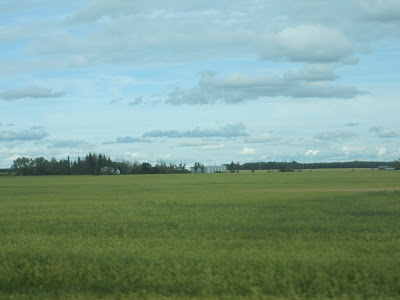 We are getting close to the turn off for Hines Creek which is our destination. 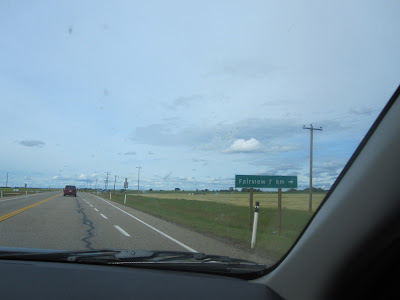 I was amazed at the number of old wooden buildings in Alberta. A lot of them seem to have been used for grain and crop storage. 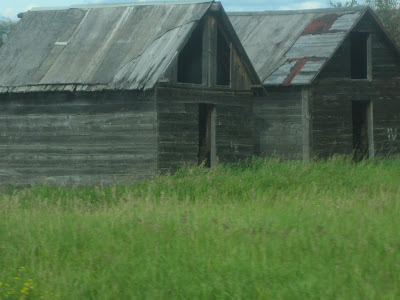 Another thing I noticed was a lot of swamps. There were an amazing number of swamps. We have nothing like this in British Columbia.  I mean the swamps were extremely plentiful. Not only that but water was seeping out of the earth along the sides of the highway in a number of places. 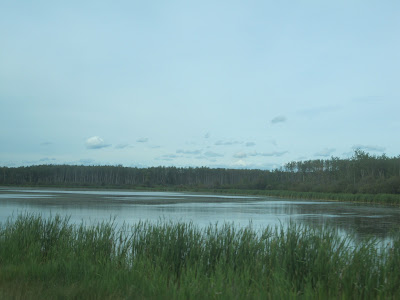 Now we enter the small town of Hines Creek where we visit an uncle.  He told us it had been raining a lot this summer.  That explained all the water in the swamps and along the highways.


This is the nice signage that welcomes us to town and which is where I think the town's museum is located. 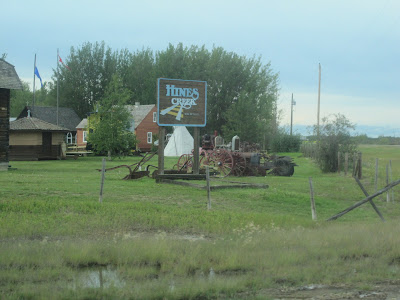 After our visit to this town, we drove back to the main highway and north again to the small town of Fairview which I had never been to before. It is only 13 miles from the main highway. 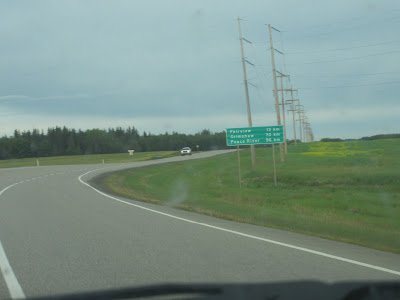 Fairview is a small community located 124 km north of Grande Prairie, Alberta, on Highway 2.  It has a population of 3150 people.but seems to be well serviced with a college and a swimming pool. Most small towns in the north do not have swimming pools or a college.  We took a drive around town and they had a good selection of restaurants. Westernized Chinese food is especially popular in northern British Columbia and Alberta and there were 3 Chinese restaurants in this small town. 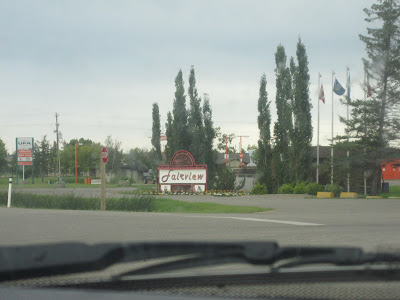 Back in my room I was ready for a good sleep. The beds were very comfortable. 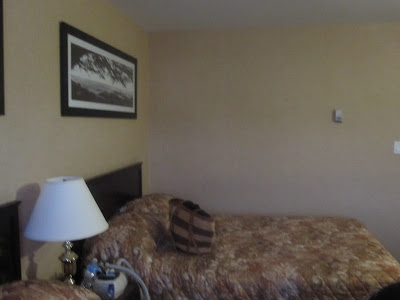 The coffee, tea and coffee maker were in the room as well as a microwave and a mini-fridge for storing drinks.  I took a few moments to go downstairs to the whirlpool before bed time but the whirlpool was not that great. It didn't have very strong bubbles or water movement. 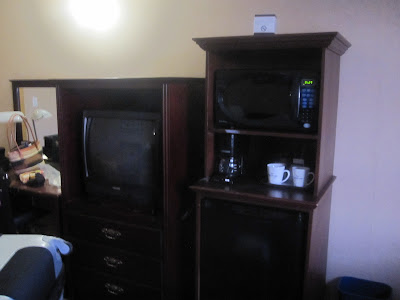 This room was well priced at $79.95 Canadian per night plus about 9% tax. It was a good reduction from the usual price of $135.00 a night. The deal was obtained through on line booking.  Available hotels rooms in this city were very scarce so we felt fortunate to get one. However, my room was exceptionally hot even with the air conditioning on.  I even tried an open window but that didn't help either.

This concludes  my second post on my journey depicted by the map below. I hope you enjoyed it and that you will join me again soon for a continuation of the journey. 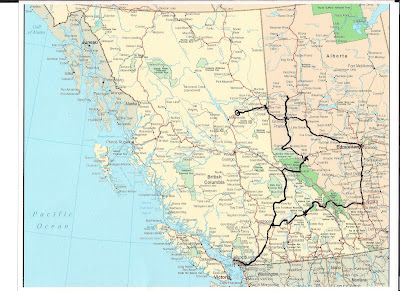 The next part of this series will show photos and describe the towns on the way to Chetwynd, British Columbia.