Some of my fondest childhood memories revolve around mama's baking.  Among other things, she made delicious bread pudding. It was so creamy and soft. Actually she was an excellent cook overall. Self-taught and a largely intuitive cook. I was not a natural cook and I took little interest in the kitchen except to make baked goods.

My lack of interest in cooking continued after I was grown.  My jobs always required me to put in long hours and arriving home late at night left little energy or time to shop for a wide range of ingredients or slave over a stove.  While mom was still able to get around, she would often visit and I so appreciated her visits.  I loved to come home from work and have well made and good smelling food hit my nostrils as I walked in the door.  I also just appreciated being able to spend time lots of time with her and though I worked long hours my weekends were free so we would spend time together going around the city and being tourists.

In later years, I had to cook for my mother and my cooking skills improved though most times my cooking was not to her liking. Who can blame her after having been such a great cook all of her life? Others of her generation looked to her to teach them.  So it was hard for her to be able to enjoy much of what I'd cook.  Later, when I retired, I began to experiment more in the kitchen. A few of my recipes and experiments are on this blog.  However, I admit to still having little patience in the kitchen.  I need simple recipes that don't require too much fussing over, especially since I'm prone to multi-tasking.  I am a simple girl at heart and I love simple food.

Recently I've been thinking of recipes that mom made when my siblings and I were growing up.  Things like rice pudding, bread pudding, dream bars, hamburger soup, home made bread, and bannock bread. Of course she made much more than these dishes, but these are the comfort foods that stick out in my mind, and which I crave from time to time. I've posted my experiments with each of the above dishes on my blog.  Even though I had no intention of posting anything about cooking on my blog, it actually became something I did rather frequently and cooking has become something I enjoy from time to time.

If you are interested in any of my cooking experiments you can search for them on my blog by typing "recipes" or the type of recipe you are looking for like "baked beans".  The repertoire on the blog is not extensive, but it is growing.  I would say that my dream bars still need work to be truly "dreamy", lol.  But other than that my other cooking experiments have turned out well enough. I call them experiments because I didn't inherit any recipes as such from mother (except for the dream bars) and I experiment by changing up recipes a fair bit to suit what I have on hand or to capture the essence of how mama made something.

I took the following recipe and made it my own with a measure of success. I can see those areas where I can improve things.

I used left over 2 left over French baguettes, one was white and one was whole wheat,.  Rather than homogenized milk I used 1 1/2 cans of evaporated milk with equal amounts of water and I used 1/2 cup of brown sugar (a slightly reduced amount).  I made sure to use lots of liquid to try and achieve the creamy consistency and also because the French baguette was very hard.  I can also use stale white bread if I want bread pudding more like mama used to make. 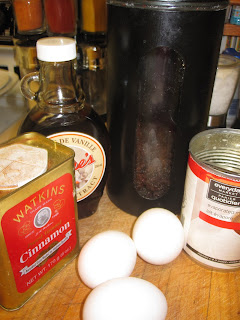 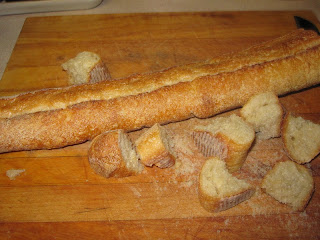 Some recipes call for the milk and eff mixture to be heated first which is what I did. If you do this with evaporated milk you need not boil the milk otherwise it will curdle with the added water.  I used mine when it was just before the boiling point. 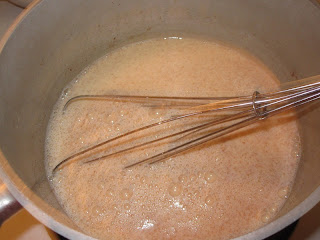 
In my house we never ate bread pudding with a sauce. We ate it with cream so I have not put a recipe here for bread pudding sauce.

After the pudding was cooked I noticed that some of the bread pieces were still a bit hard. I left the pot in the oven after turning the heat off and kept it in there for another 15 minutes or so. When I took it out again, it looked like the pudding in the photo above (Finished product).  It softened up much of the bread that was chewier.

If I make this pudding again with hard French baguette, I will first soak the bread crumbs to soften the crusts a bit. In the end though, the pudding tasted a lot like that of my childhood.

What about you my dear reader? What childhood recipes do you recall and perhaps make?
Enjoy!
at February 05, 2012