I had to go downtown to the Sears store. Sears has been located here in this downtown building for well over a decade.  Before it was Sears it was, Eaton's; a company that went out of business.  Sadly, Sears is moving out of this downtown location as it's lease it up.  I will miss it even though I don't get there that often now that I don't work downtown.

After doing my shopping research,  I was so tired.  I walked around for hours, testing this and testing that. When I left the store, I had to take a rest on one of the many benches that line the street just for that purpose. I decided to take some random photos. 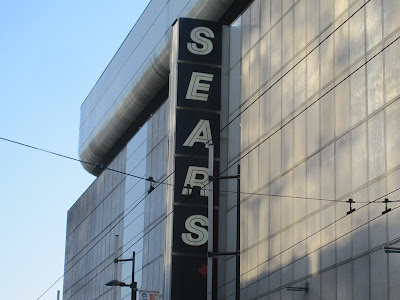 The big stores are open late on Sunday until around 7 p.m.  Many of the smaller stores close at around 5 p.m. and some stay open until 8 p.m.   People like to walk in the downtown area as there are lot of places to eat, movies to see or places to sit and have a drink and people watch. It was a very hot day.  It is actually only about the 4th hot day we've had since April because it's been raining so much.  On this day many people were in shorts which I never used to see downtown and I'm not sure I actually like the look but people are trying to stay cool.  Many of the ladies are also dressed in nice summer dresses.  Some are dressed in hot jeans.  I like to wear capris (short pants) in cotton, and a light top on a hot day. I also wear my hat and sunglasses and take water with me. 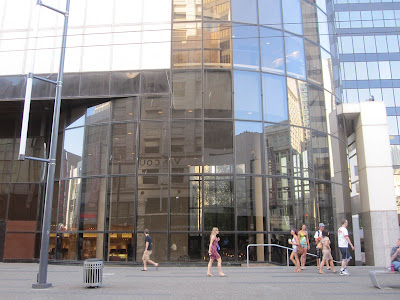 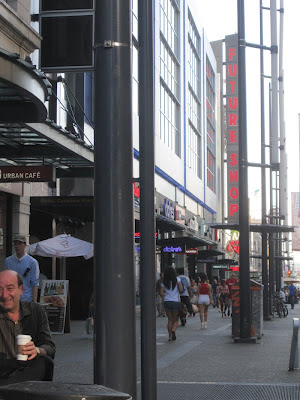 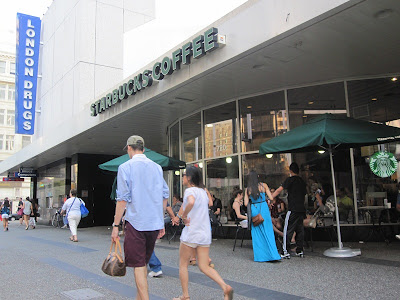 In the photo below, you will see the signage at a bus stop. It is a little underexposed  but I thought those of you who live elsewhere would like to see it.  Right below the bus sign is a street map which indicates the different places to catch buses or light rapid transit (like subway but it is over ground). Some idiot has already defaced the map by scribbling on it. Why people feel the need to deface public property, I will never know! Someone has to be pay for all that, meaning the property taxpayers. 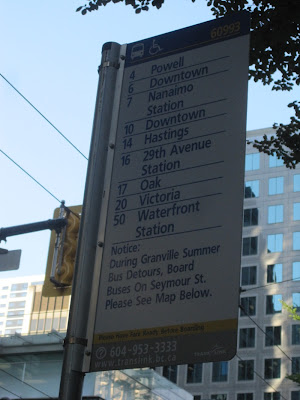 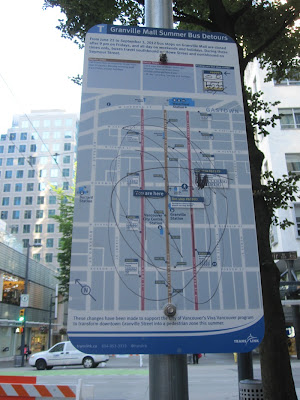 Right across the street from where these signs are located is a culinary school. This particular place is where the students cook meals daily and the public can have a fine dining experience. I ate there once many years ago and it was quite good. 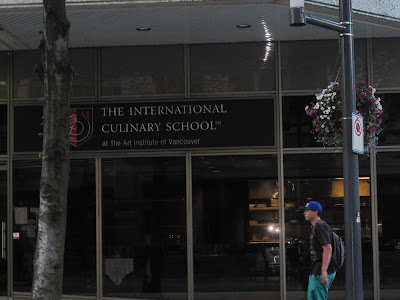 On another corner of the street there is a new Shopper's Drug Mart which is a pharmacy in a huge chain of pharmacies of the same name.  This shop wasn't there the the last time I was on this corner.  It's been awhile since I've wandered downtown. to this corner.  The last business there was a bank. 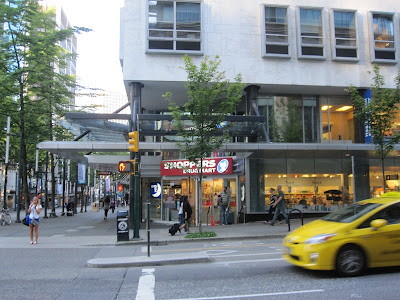 It is a rather large pharmacy. As you can see it is two stories high. 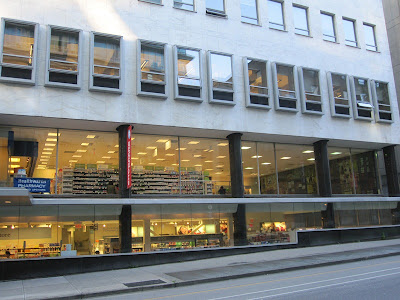 I zoomed in on the back of the 2nd floor to where the "green mural" is located. This mural has been there for years and years, and years!  LOL.  It was there when the bank was there and the bank was there ever since I can remember.  I used to think the mural was rather ugly but now I think it looks rather nice.  Funny how one's tastes can change. 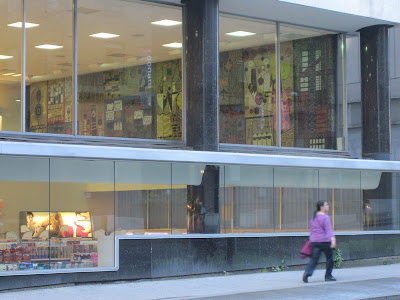 Here is another  helpful piece of signage below. These maps and helpful aids are all over the place these days. I wish they existed when I first moved to the city. 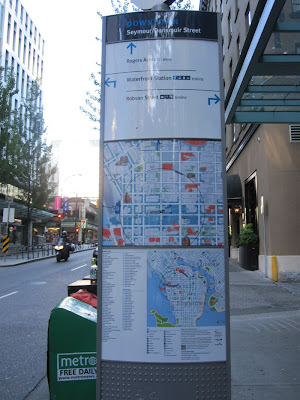 In the photo below you will see where I am going to catch the light rapid transit to the connecting bus home.  For a few stations downtown, the rail is underground.  But for most of this particular line, the rail is above ground. It can be a good way to see the city and some of the suburbs going east. 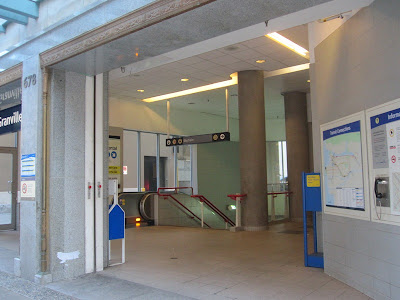