I am fundamentally an optimist. Whether that comes from nature or nurture, I cannot say. Part of being optimistic is keeping one's head pointed toward the sun, one's feet moving forward. There were many dark moments when my faith in humanity was sorely tested, but I would not and could not give myself up to despair. That way lays defeat and death.


Ever since I was a child I always had a sense of optimism and hope.  My faith in God is a big part of that.  But even before I knew what faith in God was I had a sense of optimism and looking forward to future possibilities, joy and dreams.  If I wanted to do something, I didn't think of the obstacles; only the fact that it could be done.  I realize that not everyone feels this way and I know I didn't exactly get it from my parents.  So where does the joy and hope come from?  The idea that things can get better or will improve? That all is not lost?  That there is still life to be lived?  I think it must be a gift from God himself and for that I am very blessed.  I start this new month of February feeling oh so very tired but hopeful for a wonderful month ahead.  Even baby steps in a future direction are better than no steps.

We have had a delightful winter weather-wise because we've seen more sun and had less rain than I can ever remember over the winter season. It has helped me to get my walking exercise in and I haven't suffered quite as much in the knees.  With the start of rain again I can surely notice the difference but I have hope for a brighter day ahead. My hope comes not just from my faith but also seeing some results in how I feel physically as a result of exercise, better diet, acupuncture and herbs. I am still going to sleep far too late and I'm working on trying to do better in this area.  One night though I was up so late (or early depending on how look at things) and I snapped this photo with my camera phone.


The past week has also been busy with a number of things I won't write about it all but I told you in this post that I was going to attend a fashion workshop with a friend.  We went on Friday night.  There were about 17 ladies altogether.  We sat through an interactive 2.5 hour long workshop on fashion and dressing for your body type. The young ladies who gave the presentation are designers and they were a lot of fun. They brought in  all kinds of clothing and modelled them while they gave their talks.  It made for an interesting show.  Next week we are doing a clothing exchange.  Each of us has also been assigned to wear a particular colour.  No doubt the colours will illustrate why the colour is good (or bad) for us.  I've been assigned to wear magenta which I already know is a good colour for me.  But I cleared out my closets a few weeks ago so I will have to dig deep to find something suitable. 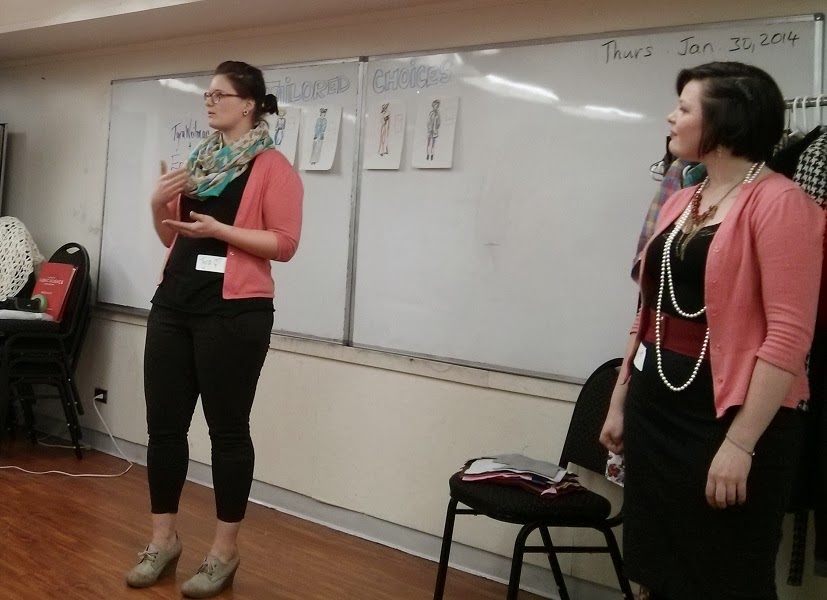 A friend I haven't seen for a long while told me he is moving out of the city, albeit temporarily. He will likely return this summer to commence a new chapter in his life by returning to university for his 3rd degree. In the meantime he is off on a holiday and for an extended visit with family members.  We had occasion to get together for coffee and reminisce a bit before he had to pack, be out of his apartment and fly off in the early hours of Saturday morning.

News of family illnesses kept me close to the phone this week. I have one cousin who was infected with MRSA a few weeks ago and has been in hospital on life support for a few weeks.  Just yesterday she was moved out of the Intensive Care Unit and into a regular ward. I have no idea how long she will be in hospital but am grateful she is on the mend and that she has the support of her church. I can't even go and visit her because she is about 1200 miles away. One of her sisters who lives even farther north had been visiting with her but unbeknownst to me was also scheduled for major surgery to remove one of her kidneys.  She underwent the surgery on Wednesday this past week and was already discharged and flew home today.

It is hard for me to believe how they could send someone so far from home on such a long journey before her stitches have even healed. My cousin lives in a very remote community where there isn't even a hospital. I just pray she will be okay. Her husband has been "holding the fort" and keeping the money coming in as my cousin couldn't work while keeping company with her sister. Living in a remote northern community can be very nice and has advantages but it is also incredibly expensive and the downside is being so far from extended family and not having any available medical or hospital facilities.  I've been praying for both of my cousins and am so happy that one of them who was so near death, has revived.  I had just talked to her in late December and was shocked that a week or so later she was struggling for life in hospital.  It really drives home how fragile life can be.

To relax a bit I've been reading more this week.  Reading is one of my favourite hobbies but I've been trying to cut it down a bit this year so I an focus on other things.  This isn't really working, lol.  This time I've picked up "Long Walk to Freedom" which is Nelson Mandela's autobiography. I decided to  read it after recently seeing the movie.  The book fills in a lot of gaps about Mandela's early life, education and political development.


I was out and about in another part of the city the day before and took these photos for you.  This corner of the city is called Granville and Broadway.  Both of these are very prominent thoroughfares in the city and I thought it would be interesting for those of you who have never been to Vancouver to see what a typical street looks like. 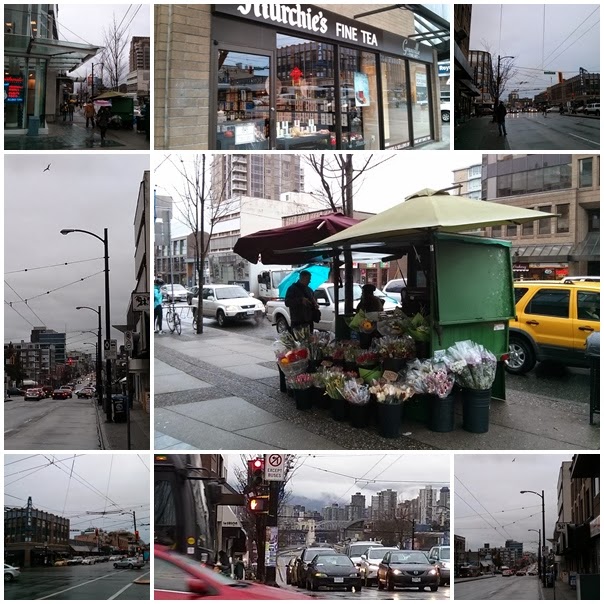 Joining in with Skywatch Friday
and
Weekend Reflections
and
Mosaic Mondays
and
Our World Tuesday
and
Blue Monday
at February 01, 2014