The Long Saga is Over

- February 16, 2014
In late June my family and I looked forward with great anticipation to moving my mother into a new care home. We felt it was going to be very good for her since it was "state of the art" facility and brand new staff. Boy were we ever wrong!  It has been a virtual nightmare for mother and I and a very tiring and stressful one at that.  We have now moved mom back to her former facility and the difference is like night and day in a good way.  The move went smoothly though it took long as most of her things needed to go into storage.  She no longer has a private room. That was the only way to get her moved quickly.  There was only one hiccup which wasn't of the facility's making and that issue has since been resolved.

I had a couple of not very nice surprises about mom's condition.  One of them was the state of her pressure wounds.  Right after moving mother was assessed by her new nurse as having stage 3 pressure wounds, rather than the stage 1 which she was told by staff at the former facility. The new nursing team is working around the clock to treat and pack the wounds.  Part of the treatment is keeping mom in bed for much longer stretches of time so they can turn her on her side and relieve the pressure. In between lying in bed she gets up and motors around.  This keeps her happy.  The other problem is the terrible state of her oral health. I have to locate a dentist as soon as possible and make an appointment to address several problems, not the least of which is pain.

The good news is that though mom is now sharing a room, the things I packed for her fit nicely into the space.  We have retained her television and dvd player for her use but had to store the portable cd player, fridge, bookshelves, books etc.  She doesn't use any of this anyway but if you've ever dealt with an elderly person you know they like to have their things around them.   The only thing that helps deal with this situation is that mom is the one who decided over my objections, that she wanted a shared room.  That means she has to adjust to the situation. There are a number of positives about where she lives now.  Too many to itemize but a big one is that she is now she is able to "drive" all over the place without worrying about getting through doors by herself.

The new facility is located all on one level unlike her last residence. That alone really brightens her day.  Plus she was also welcomed back by so many people, staff and residents alike, and that can only lift one's spirits.  Since mother last lived at the "new" facility, there has been a change of management and I observe that things are much more organized and running better all around.  There is also a lot better communication with the family.  This is wonderful!  The long saga of dealing with the former facility is over. I'm so relieved. Now I can start to focus on some of mom's other pressing care needs like dental and eye care. 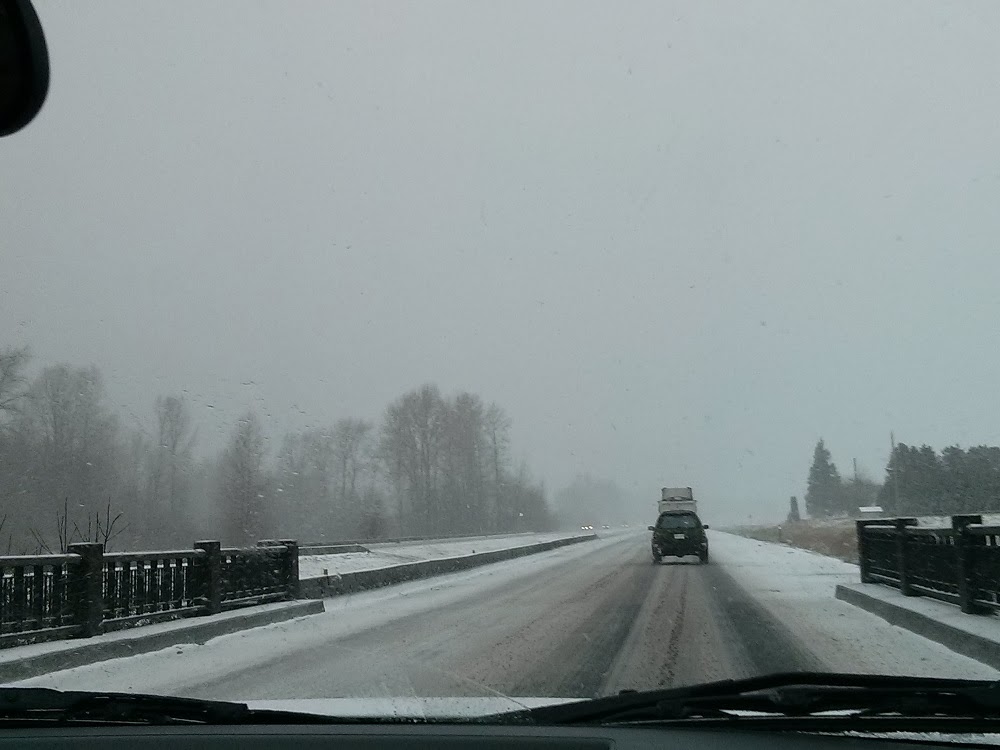 A huge snowfall was forecast for our journey.  In my city, the snow quickly turned to torrential rains but as we got an hour or two out of the city, the snow was coming down heavily.  These photos (above and below) show the early stages of snow fall. 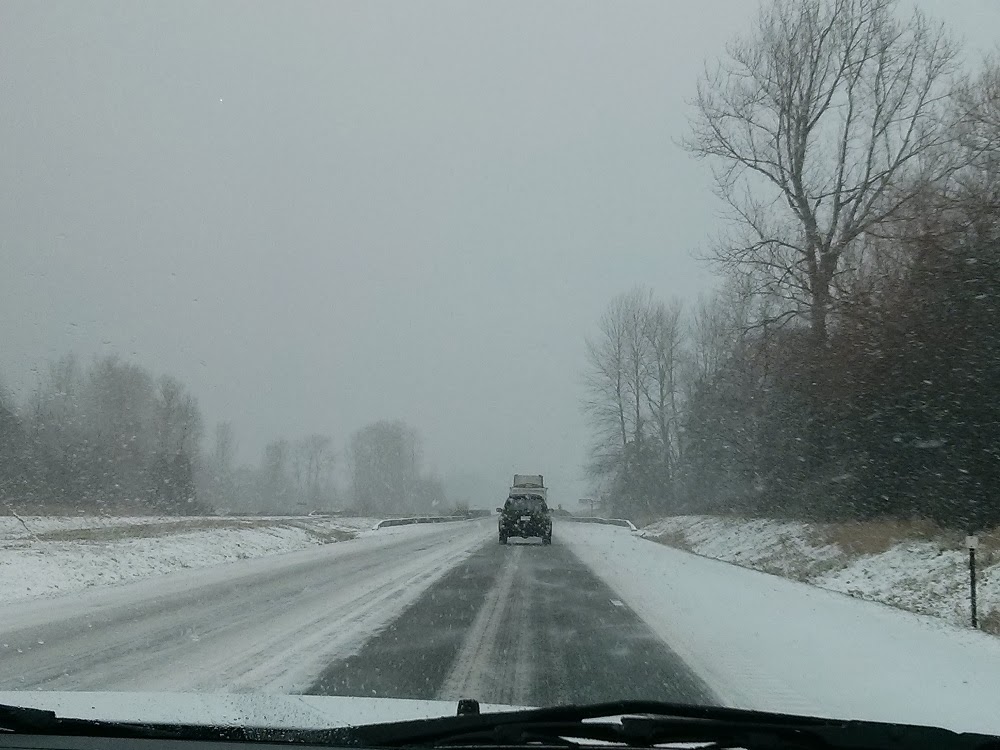 By the time we got up the mountain, the snow was considerably heavier.  One hour from our final destination we passed one terrible accident on the highway due to the icy conditions.  The weather was significantly warmer and sunnier when we returned south a few days later.

I've been home for a few days and am slowly trying to get back into a normal routine. I am quite tired but have managed to do a few errands, lots of laundry and stock up on food for the weeks ahead.  This weekend I am taking it easy. I'm exhausted from the stresses and moves of the last 7 months.  We've moved mom 5 times in total (4 times within the former facility and once last week) and dealt with endless issues.  We may have to move her again if she gets a private room but have been told the wait is very long.  In the meantime I hope to get some rest.

It is a cold, rainy and windy night tonight.  As I sit here I am smelling the comforting aroma of a ham roasting in the oven and scalloped potatoes baking.  This kind of dinner is rare since I only roast ham about once a year at New Year's and make scalloped potatoes even less frequently.

Here is the recipe for the scalloped potatoes.

1.   In a small sauce pan, melt butter and blend in flour.
2.   Let sit for a minute.
3.   Add all of cold milk, stirring with a whisk.
4.   Season with salt and cayenne.
5.   Cook sauce on low until smooth and boiling, stirring occasionally with a whisk.
6.   Reduce heat and stir in cheese.
7.   Place a half of the sliced potatoes in a lightly greased one quart casserole dish.
8.   Pour half of cheese sauce over potatoes.
9.   Repeat with second layer of potatoes and cheese sauce.
10. Sprinkle the remaining cheese on top.
11. Top with some paprika for color.
12.  Bake uncovered for about 1 hour at 350°F.

The recipe for scalloped potatoes is from southernfood.com and is the first time I've tried it. I didn't have much cheese so saved it for the topping and omitted it from the sauce.   I'm used to mom's scalloped potatoes which is a much quicker and easier way to prepare them and doesn't use cheese at all.  Perhaps I will share that another time.