In several of my trips to Kenya, I travelled to some very small villages to the east of Marigat, Kenya.

The first two photos are of the small town of Marigat. 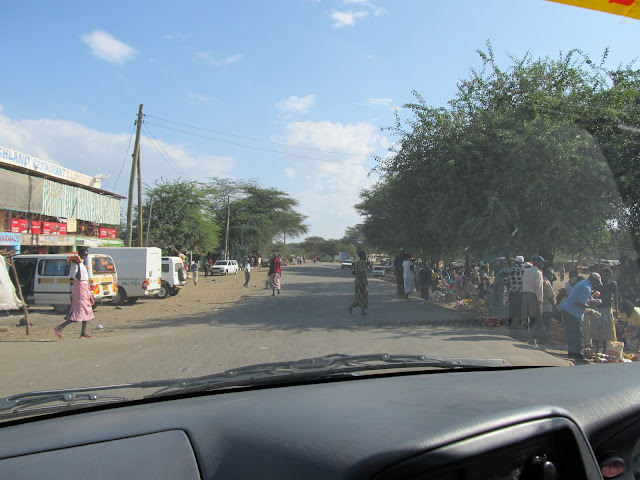 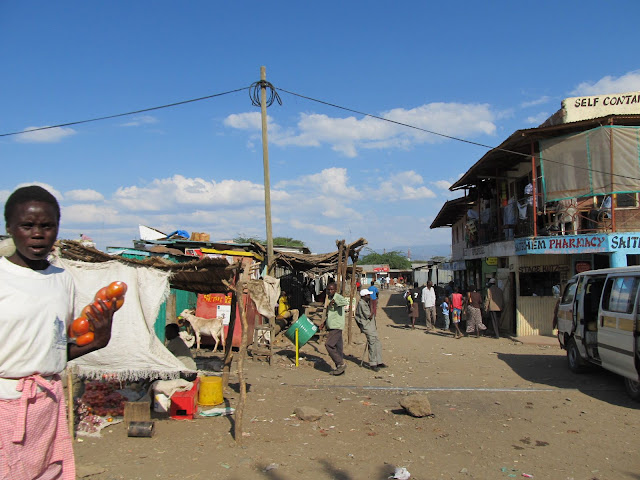 I've circled two areas in the map below. One is the town of Marigat which you see in the photos above. The second is the approximate area of where we travelled (click on the map for a larger view) and which are captured in the photos below. 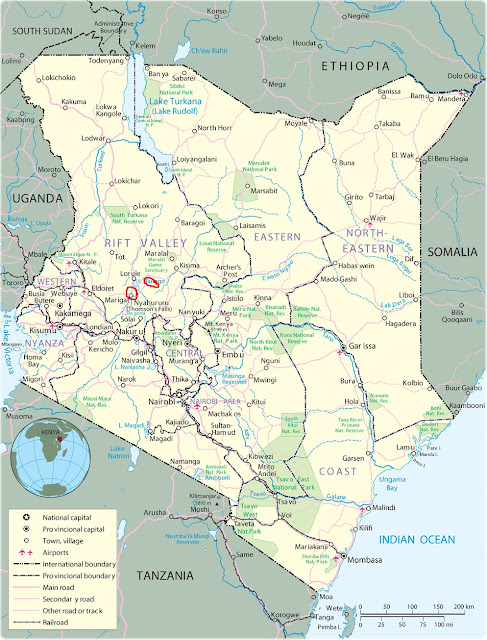 On this particular trip we were headed to a very dry area to learn about the water needs of the people. They wanted to show me the area and explain the vision for the project to bring water to the community. I don't know why they thought I could help as I am just one person.  But as I believe in a good God, I gladly accepted their invitation and went to visit them.  After we explored the area we prayed over the area and for the needs. Sometimes you just have to step out in faith, take the first step and not worry about how things will get done. Just believe that they will and do what you can and let God do the rest. So it was that day.

Along the way, I also did some sightseeing at Lake Bogoria and Lake Baringo before we reached our final destination. One thing I learned early on in my Kenyan travels is that if you are going somewhere you better be prepared for a very bumpy ride.  You also need to start out early in the morning say by the break of day since it isn't advisable for foreigners to travel after the sun goes down.  The sun rises and sets like clock work each day and the sun goes down about 6 p.m every day.  the other thing to bear in mind is that it takes a lot longer to travel shorter distances than it does in North America.  I think this is due to heavy traffic and frequent traffic jams, road blocks and road checks by police, unforeseen roads conditions and so on.  Since my first trip to Kenya in 2007, the highway infrastructure has been very much improved.  But those improvements don't extend to the backwoods and back roads. Starting off early and getting to your final destination by 6 p.m. is still advisable. Otherwise be prepared with a place to spend the night.

In the first photo we are driving eastward out of Marigat and into the back country. Notice the road and we are not even out of town boundaries. 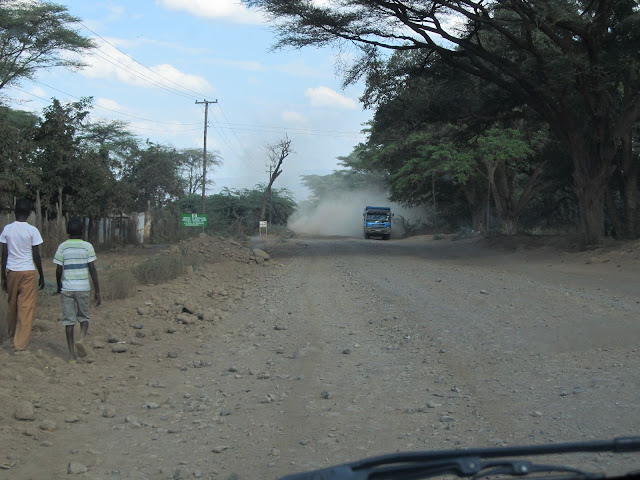 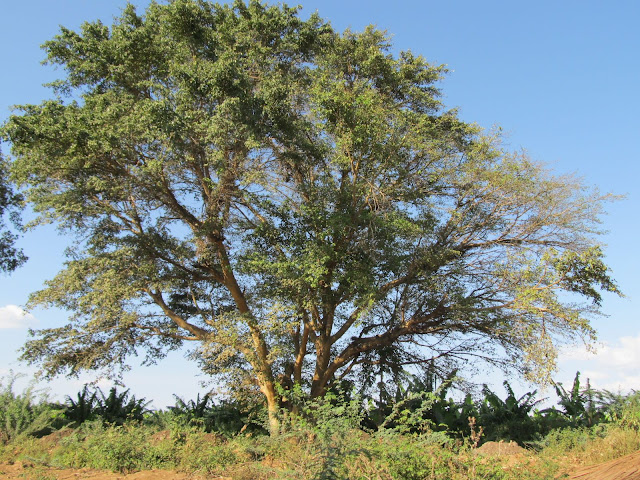 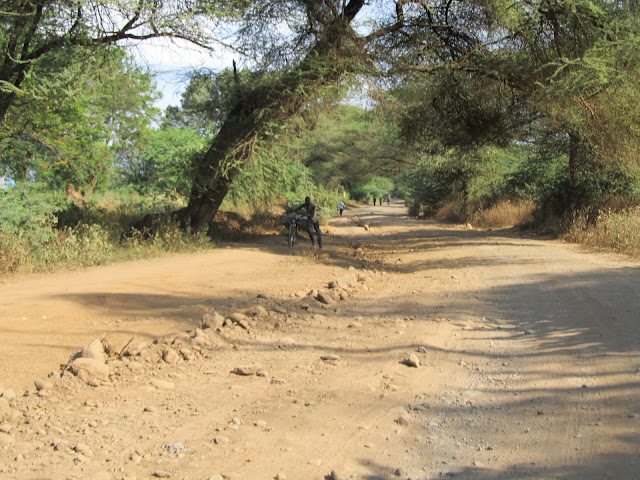 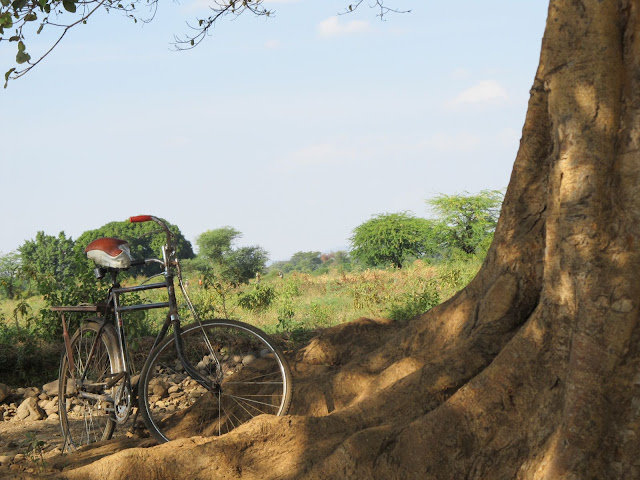 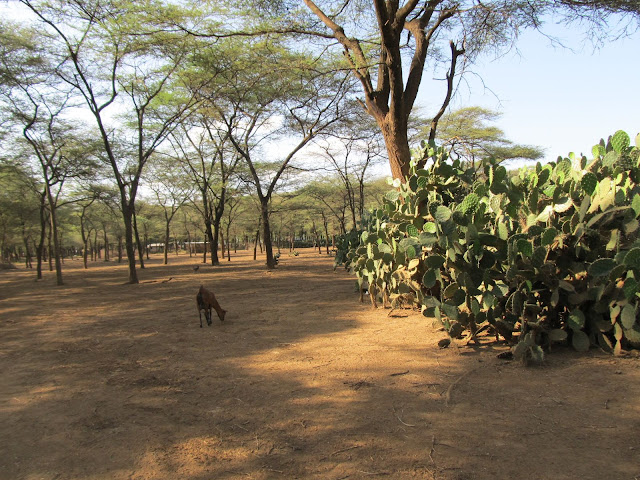 Despite how dry the area obviously is I found it quite beautiful.  It was very slow to travel and very dusty because we were travelling over the land and not always on roads. The earth was also very soft.

The man in the white shirt in the next photo is the local pastor, my host and escort for the tour of the borehole area.  The man in the blue shirt is my driver. They were discussing whether we should cross the stream.  In the end I walked across since the water wasn't that deep and I wanted to cool my feet. 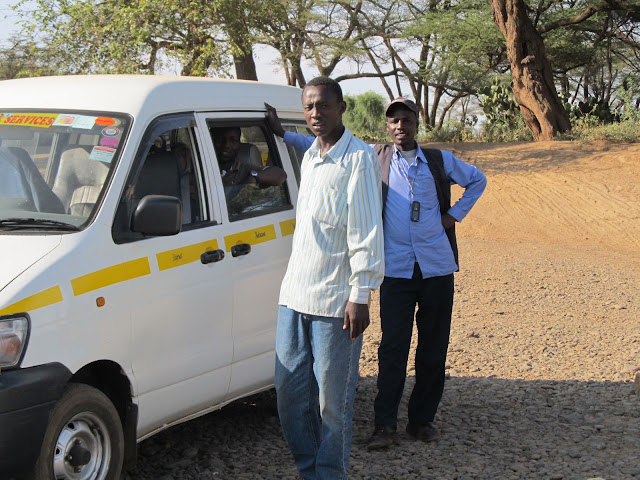 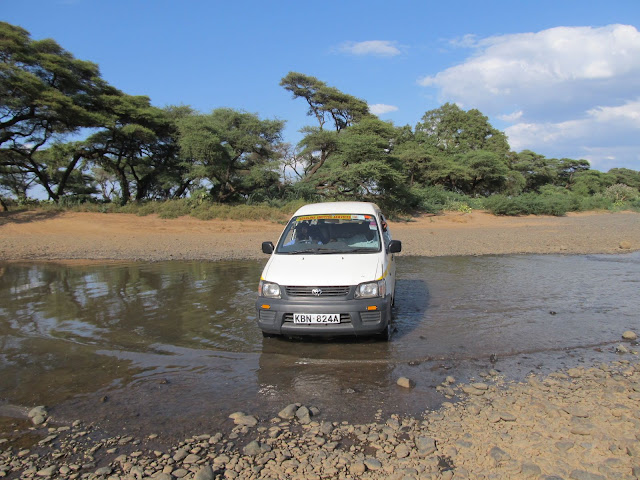 I am absolutely fascinated by how a place can look uninhabited yet people will seemingly come out of nowhere. I'm also fascinated by where and people live and you see homes dotted everywhere in what seems to me like unlikely places but the people have probably been living there for centuries.

The inhabitants of the hut in the photo below had just done laundry and laid the items outside to dry.  It is the practice in the rural areas of Kenya to lay freshly washed clothes on the bushes and on the grass to dry rather than on a clothes line.  In the city they hang the laundered clothing on the line.  It doesn't take long for the clothes to dry in the heat. All over the countryside you will see people's washed clothes lying on the bushes or grass to dry.

I went into one of the thatched huts and was very impressed by how cool it was despite the blazing heat of the day. 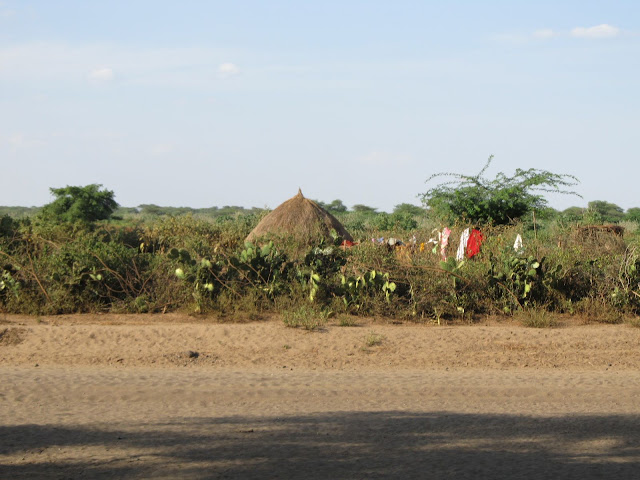 The walls of the hut were decorated with news paper cut outs, the first I'd seen in a village home. Often I did see newspaper lining the walls like wallpaper, but not hung loosely as a decorative elements with the cut out designs.  I can tell by the items hanging on the wall like the kerosene lamp, the calendar with pictures, the alphabet letters and shopping bags, that this person really cared for her home. The hut was very small inside and was one round room.  It was also very cool inside.  What a relief it was to be out of the intense heat for few minutes on that very hot, dry day. 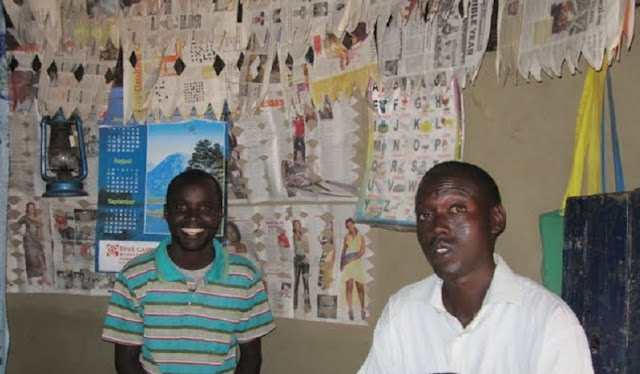 I am always delighted to see the local animals, both wild and domestic. I am not sure what kind of cows these are.   There appears to be several varieties of cattle in these photos. 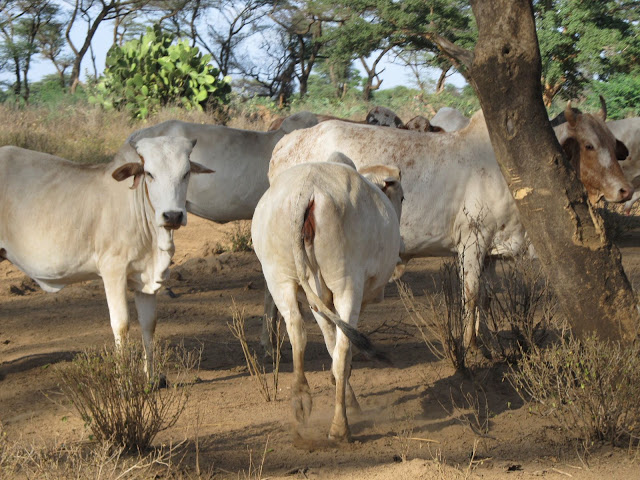 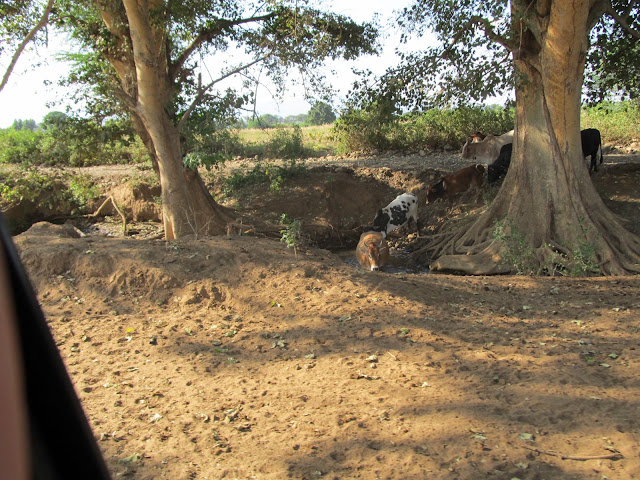 After my visit to this area, I spent a few years trying to help these people get a borehole. Through my contacts in Kenya we found a consultant to produce a report to locate where the water was and identify where to build the borehole.

All of this was rather expensive and I could not progress much further in the project with just my own finances.  I tried unsuccessfully to find donors through the local churches, including my own and also through my blog. I was finally able to find a group of service oriented Christians in Jamaica.  The Jamaicans travelled to Kenya for their own reconnaissance mission and the Kenyans thoroughly enjoyed hosting them, meeting them and travelling with them. The Jamaicans committed to getting the borehole completed and they were in fact able to move it along but they ultimately did not complete the project. I believe it proved too expensive for them and the major donor they were counting on in their church had to draw back. It took time and persistence but the local community in Kenya finally managed to get a group of believers in Israel to step in and bring the project to successful conclusion. 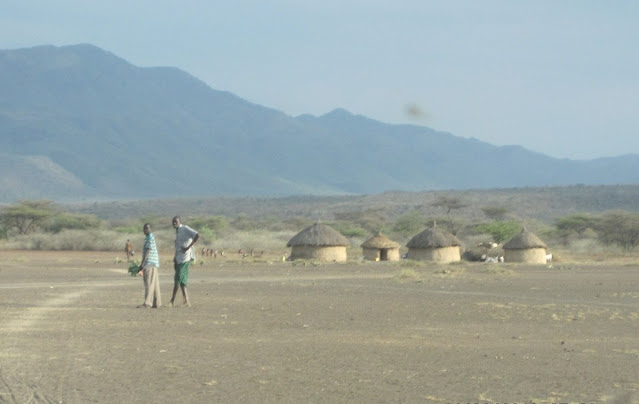 This huge ostrich was running around in the village. You don't want to get to close to an ostrich. I understand they have a very powerful kick. 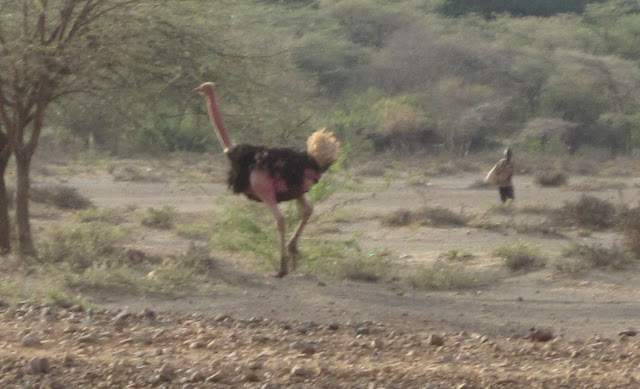 I don't have an updated photo of the borehole as I was not directly involved at that stage of the process.  I was an interested person from afar and Pastor Jonah kept me generally updated through his contacts in that community.  I was unable to travel to the community again in my last visit to Kenya due to being very sick for much of my time there. 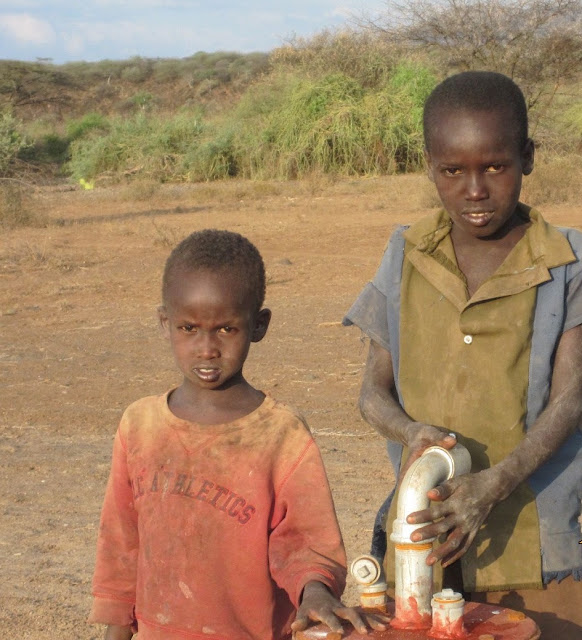 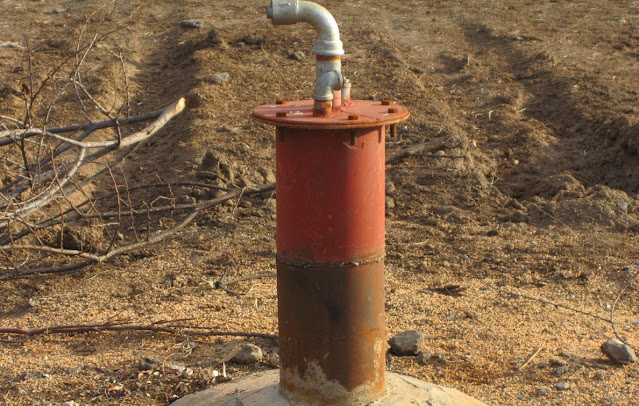 I did have one other connection to the pastor and his wife a few years later when they were in hospital ready to deliver their new baby, a first child. There were some complications and high medical costs and it was my privilege to be able to assist at the time. Since then most of the missions efforts have been focussed on assisting individual with the exorbitant medical costs they incur when seeking medical treatment.  The needs are very great and the available helpers is very small but the helps are extremely necessary.

In conclusion, I am very happy for the people who got their borehole after years of struggle and belief.  They have so little in the way of material things but now they have water and their daily lives have improved.  I am also happy that I didn't run away from such a big need and project. Though I cannot say that I did a lot;  I did what I could and I believe that big things come from small beginnings.  The people needed someone to listen to them, hold their hands, believe with them and try to find supporters for them so that they could one day have water. I was able to do some of those things and get them the consultant report which they really needed.  In the end, it was their sheer persistence, dogged determination, faith and their prayers and the many prayers of others, that helped to complete the project.

This is a post for Saturday's Critters.  It became about much more than the animals after I realized that the cows I was going to post about were a window into a much bigger story and I could not let the story go untold.

I hope you enjoyed it and that it inspires you to branch out in your dreams and visions of helping people.  Even small things are a huge help to someone.

Thank you for stopping by. Have a safe weekend.