It's been a busy week and I've been fighting a cold. It is something I fight every year in October when the weather transitions from warm autumn to cooler autumn. It's a bummer but it is what it is.

This October I have been busy decluttering and I've written about it in this space from time to time, not just in October but over the past long while. Some weeks and months I do much more in terms of decluttering than other weeks and months.  This  month the kitchen seems to be getting a lot of attention and so far I've gotten rid of many items from my small cupboards.  Metal bake ware, plastics and Tupperware which are long past their prime and lots and lots of glass jars, plastic and metal coffee containers, papers, cardboard and so on have been recycled.  I also got rid of lots of small items from the bathroom and many items from the closet, dresser drawers and shoes I no longer fit or need, have been given away. Several items were taken to the storage unit in the building and one standing fan had to be taken to the recycling center. I also have 2 large metal patio chairs which are past their better days. If they fit in the car they too can go to the recycling center.  Otherwise I'm not sure when I can take them.

In between decluttering jobs, I clean the cobwebs from the corners. Literally.  I did this less than 6 months ago but the cobwebs seem to accumulate very quickly as does the dust. I've been trying to keep on top of it all.  There is still a lot to recycle and to get rid of but I'm starting to see a real difference in the spaces in my home. I will keep at it and when I am all done with the tasks I will see what I can do to free up actual floor space.  I am not aiming for a minimalist home as such. But I am aiming to pare down the items I use and keep only what I actually use.  I intend to keep doing my hobbies too and hobbies tend to take up a lot of space.  I am trying to find a happy balance for daily living and for hobbies, some of which may be more sporadic.

I'm still doing Flylady routines almost every day.  It seems to help everything run more smoothly even though I haven't implemented the full Flylady system. Once I get started on doing things and cleaning things I just keep on going.  It means much more is getting done every week.

The weather here has been beautifully sunny this past week with the exception of Friday when it poured rain.  But it has also been very cold. I took some garden photos on Saturday. I'm sharing what might be the last of my garden photos for this year. 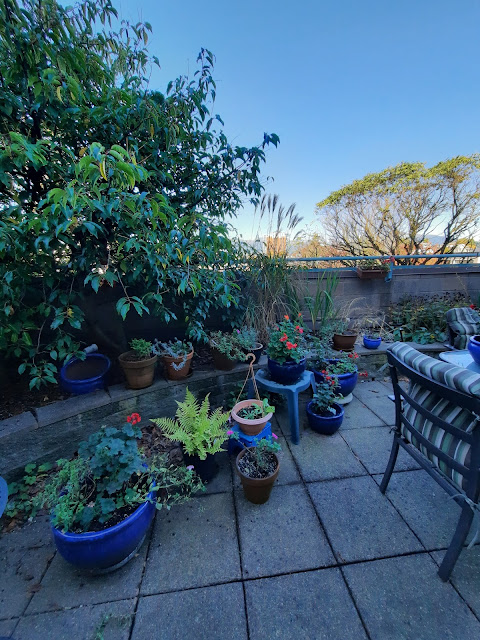 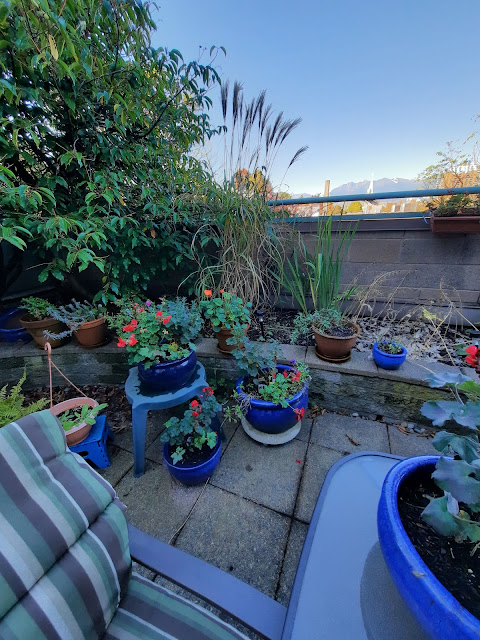 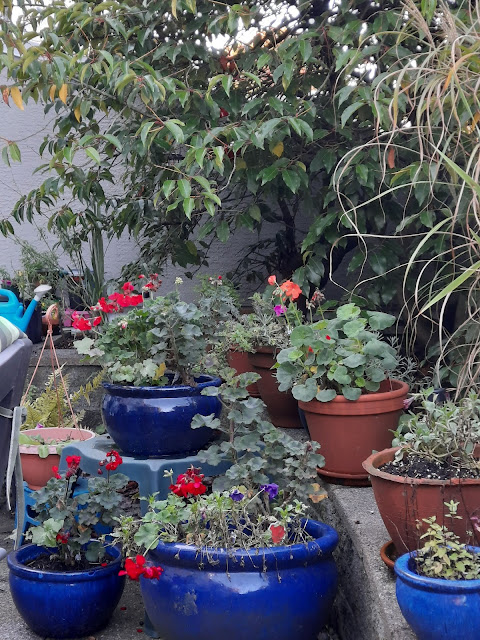 It has now been about 2 months since I did any work in the garden so I'm amazed at how well the plants have done though many of them are way past their prime.  This week I noticed that the pansies and the petunias are pretty much done. I think it was simply too cold for them as our temperatures went down to 4 at night. The geraniums are still producing a lot of new blooms but I'm not sure how long that will continue.

Something was eating the leaves in  my garden this year but they didn't touch the leaves of most of the flowers. This is the first time I've had this happen and I'm not certain whether it is pests, rodents, or my neighbour's cat. 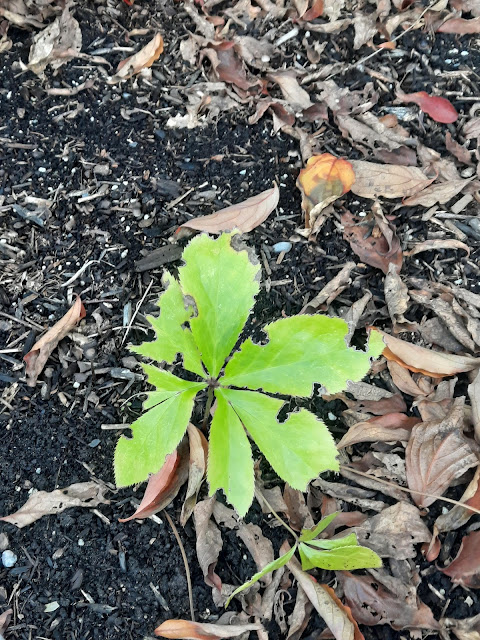 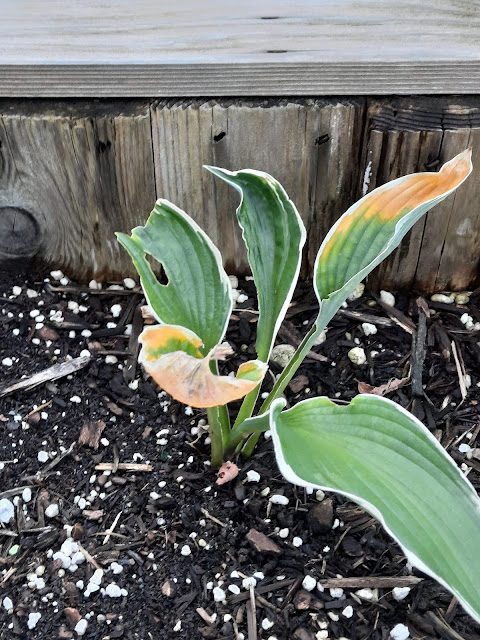 In any case, I am hoping that I will put the garden to rest by the end of October and wash and cover the patio chair cushions. I don't have storage for the patio things but I do try to keep the cushions out of the rain over the winter and I move the table umbrella and the table and chairs so they are no so directly impacted by the winter elements. As a side note, I read that the Farmer's Almanac forecast is for a mild November and a very cold winter.  The other day, our local meteorologist said that this year we are experiencing La Niña.  La Niña refers to the periodic cooling of ocean surface temperatures in the central and east-central equatorial Pacific and is the colder counterpart of El Niño.

The Black Eyed Susans have now lost all their yellow petals. 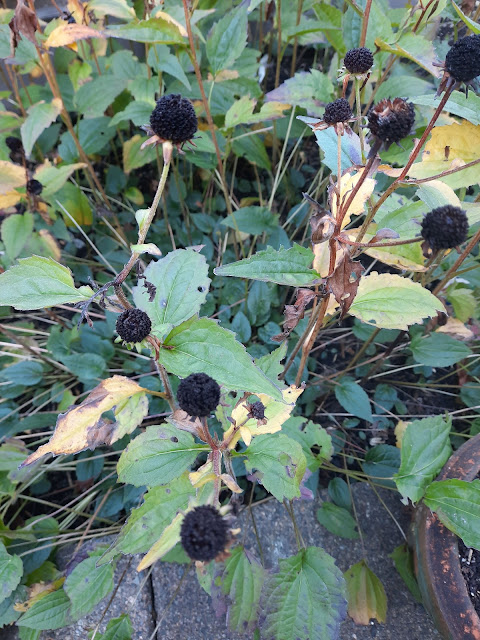 But the zinnias have new buds! I can't believe it. But they were very late to bloom this year and maybe they are confused.  The photo shows evidence of my neglect of the garden over the past 2 months since summer ended. 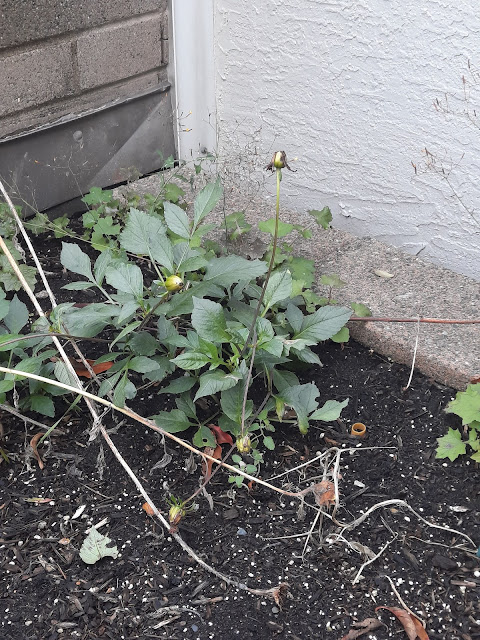 When it gets cold outside I usually start baking.  I saw this cinnamon loaf at Mari's Blog called My Little Corner of the World.  Check it out if you like cinnamon and sweets. I misread the recipe and ended up making two loaves but I only put frosting on one of them.  After trying both, I think it is better with frosting.  Overall though, the recipe is to sweet for me and I have to be careful about that due to blood sugar issues. 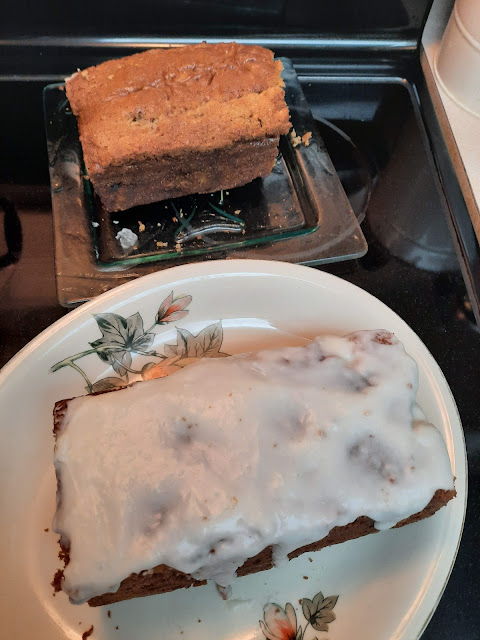 On Friday I went to the hospital to have a colonoscopy. I had one just under a year ago but the doctor couldn't find the one small cyst she thought she saw during that exam so I had to return in 6 months.  The follow up appointment was delayed due to Covid 19 and I also put off the appointment as long as I could.  But I had to get it over with or forfeit my spot in the GI follow up care and Friday was the day.  This time the doctor had a good look around she discovered I didn't have a cyst after all.  What she saw last time was actually a part of the colon itself. That was good news.

She did find something, but it wasn't quite a cyst. I'm not sure what it is called but she said they are common and are often left intact. I suggested she cut it out anyway and she agreed. It will be biopsied as per the usual practice.

The good news is I don't need to have another procedure for 5 years and I'm very happy about that.  Not only do I dislike the preparation but I get very nervous about the procedure itself. They sedate me but I am wide awake as per my preference. Due to the light sedation I didn't even need 10 minute recovery afterward.  They let me go but not before making sure my ride was there as stated.  I took a few photos but haven't posted any with people due to privacy issues. 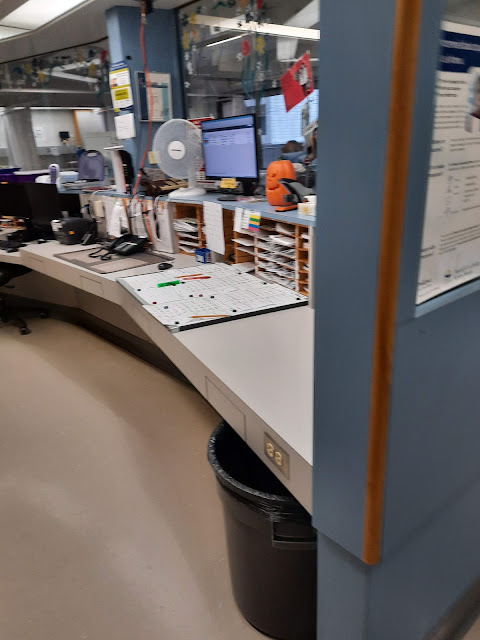 Photo of the nursing station 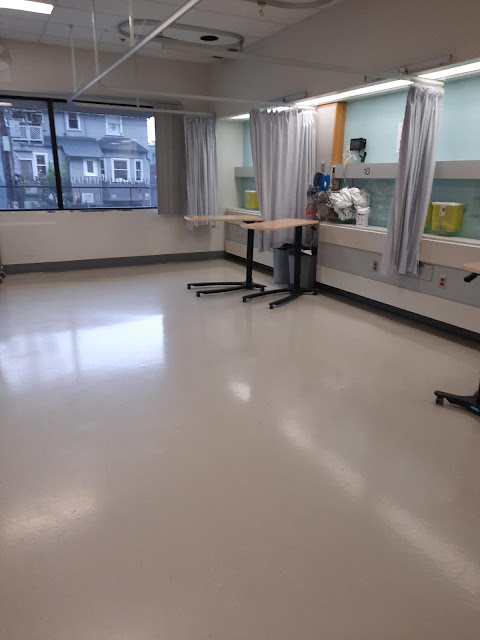 Photo of the recovery room before they start bringing the patients in for recovery.
We had snow in the north and at higher elevations (none in the city) for the past two weekends. The record snowfall  created havoc on the highways and some serious accidents as well. 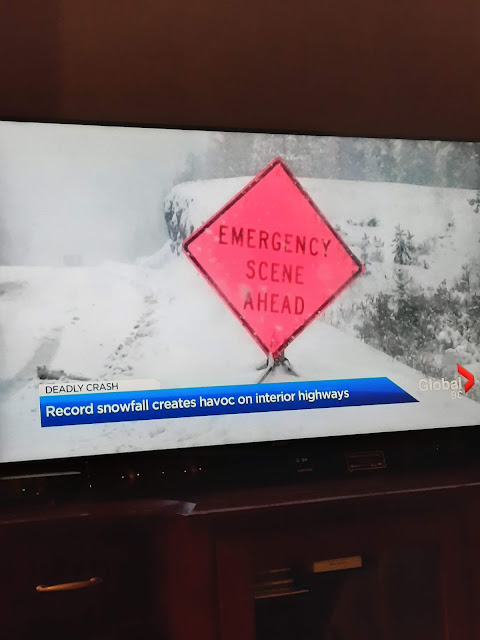 On Saturday we also had a provincial election. I voted by mail in ballot along with almost 700,000 other people.  Approximately 500,000 people returned their mail in ballots on time to be counted but the counting doesn't start until November 2nd.  Even without the mail in ballots, the election was handily won by our incumbent Premier John Horgan.  He now has a majority government by which to rule.  That was his goal when he took a gamble and called an election a year earlier than required. His win is historic in that it is the very first time that the New Democratic Party (NDP) has won 2 consecutive elections in the province. 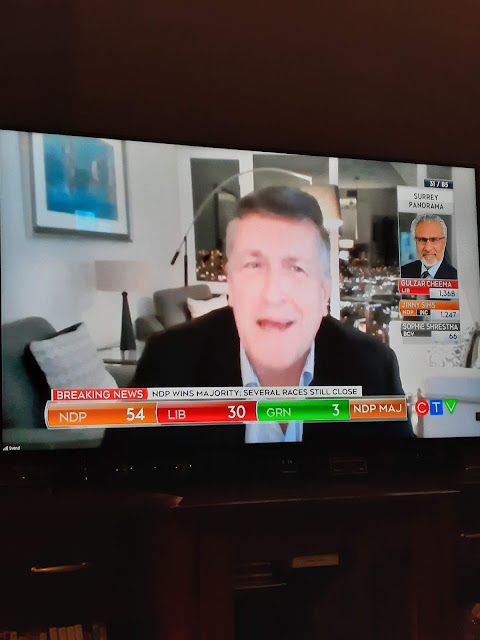 In other big political news, the Opposition Party of Canada,  brought a "No Confidence" motion against the Prime Minister of Canada on October 21.  They wanted to create a special committee to probe the government's ethics and spending in response to the pandemic and a scandal related to the WE Charity.  Members of Parliament (MPs) voted 180-146 to defeat the opposition motion, with the NDP, Greens and Independent MPs voting with the Liberals.  It means we will not have a snap federal election this fall.

I hope things can settle down for awhile with all the politics here.  People want and stable governments to help steer the nation while we recover from the pandemic.

Thanks for reading my post today. Stay safe everyone and do what you can to stay happy and high in spirits. May you be blessed today and each day hereafter. May you and your loved ones have continued health or improving health. May you have the material things and the finances you need and last but not least, may you have the strength and confidence to handle whatever comes in your path. 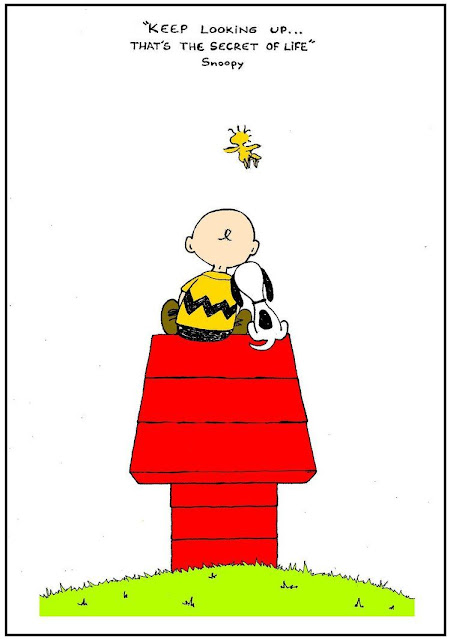