I hope you have all been faring well.

Since my post about the rain damage and flooding in the northeastern part of the province I've spoken to one of my cousins who lives there. Thankfully she didn't have any rain damage to her home. Her married daughter and children who live in the next town over were out of town when the rains happened. They managed to make it back to home on back country roads before those roads were shut down as regular highways were impassable. I haven't heard of any horror stories (that doesn't mean none have occurred). About 213 people were stranded in back country areas after roads were washed out. I read that generators, fuel and food were being taken to them though am not quite sure how it was getting through.

On Monday and Tuesday this week meetings were being held in some communities to help people apply for Disaster Financial Assistance which is administered by the Provincial government.  This assistance is available to homeowners, residential tenants, small business owners, farmers, charitable organizations and local government bodies that were not able to get insurance to cover disaster-related losses. The province's Transportation Minister says crews were working around the clock to get highways and roads back in order. Five of 6 highways were re-opened and another will be reopened on Saturday though it may take awhile longer to get all lanes opened on every highway.  The financial cost of mitigating all the flood damage is very high especially when combined with the annual costs of forest fires. The provincial government is calling for more federal funding aimed at programs to prevent floods and wildfires due to the fact these are now happening with greater frequency.

Down in the south where I live the weather has been quite unsettled this week. There has been a mix of sun and rain all week. I've been fortunate to get out in the sun several times this week. I don't like hot weather but I do like sunshine. So when the weather is mixed sun and cloud it suits me fine. Tonight it started raining and I think tomorrow there will be more rain.

There was a very interesting movie about a man I'd not heard of before. It stands to reason since I am not a mathematician and this man is from India. The movie is called "The Man Who Knew Infinity".  It was playing at a very late hour but I decided to go and see it.  I'm sharing a trailer for the movie. If you like it I recommend you go and see the full movie if only to learn more of the genius upon which this story is based.


I've been making slow progress on  many things on my 'to do' list which is why I am not posting so frequently these days. I'm enjoying the slower pace as I've scaled back a lot on internet time. I am still visiting many blogs and so many of you will have received a visit from me.


In closing, these are my sky photos for this week's Skywatch Friday. 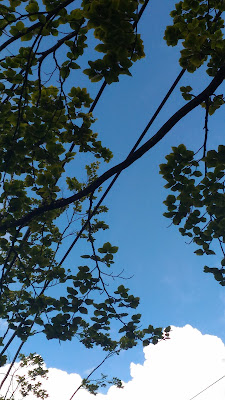 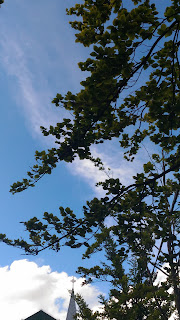