This is just a quick post to update about my car and a few other matters.

All in all, the car has been kept up to date over the years with oil changes, tire needs, windshield replacements due to highway stones putting cracks in the windshield, windshield wiper replacements and a little maintenance here and there.  Total costs for this year's tire and brake jobs is about $1600 which is not that bad.

The car is now getting old by car standards (2013) and due to declining sales the Ford company has decided to discontinue the model. In August 2020, the Ford company announced it was pulling the plug on making Ford Fusion cars and would instead focus on SUVs, crossovers, pick ups and the iconic Mustang. I missed my chance for a trade in while the car could still bring in a good penny for trade in value.  I  don't believe in paying a whole lot of money to get a car of my dreams since they depreciate so quickly.  That means I will probably keep the car as long as I can continue to repair it at a reasonable cost.

Another cost factor in car ownership is cost of car insurance and petrol/gas,  Where I live the cost of car insurance for one year is through the roof.  Almost a year ago I paid more than a return flight to Kenya for the car insurance and would have  paid much, much more were it not for a long and good driving history which gave a 40%  discount. I don't know how young people were able to manage the costs. I had read horror stories like the one about one young woman who was working as a waitress while to university and her car insurance was going to cost $5000. Petrol or gas as we call it, is also extremely expensive. The cost was $1.40 a litre pre-Covid ($1.06 US). Right now it is about $1.20 a litre (.91 cents/litre or $4.54 per gallon US). For the longest time, the cost was about $1.30 a litre so it has come down now that people are not driving so much.

The government runs the car insurance program here so it has a monopoly and there is no competition (it's different in other provinces). They say the high cost of our car insurance is due to ballooning cost of motor vehicle related litigation and court judgements in such cases. Quite recently our provincial Attorney General put forward legislation which limited the kind of payouts one could get for certain types of injuries and the legislation was passed.  This change is supposed to lead to reduced car insurance rates and possible rebates next year in 2021.  I hope that  this intended result really happens in my case as far too often I hear how this or that has been reduced only to discover later that the benefit doesn't accrue to me for one reason or another.

Below is a photo of the make and colour of  my car.  It isn't my car but this is what it looks like.  I love it because of the look and because it is roomy and comfortable and has many places to put your drinks in both the front and back.  This is very convenient when travelling out of the city.  The trunk is large and the seats can be put down in the back if you need more room to transport things. 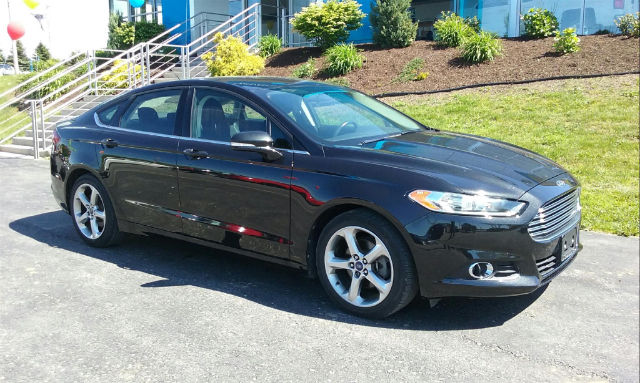 I do not need a SUV or a pick up so this car does what I need for the most part. It took me back and forth for years in the last few years of looking after my mom. It has also made 3 long trips to the north country.  Mainly though the car is used for local jaunts on an intermittent basis not a daily basis.  It is not used for going back and forth every day and that is why the car insurance is such an issue for me. In 2020 I paid over $2000 Canadian dollars for a car driven for pleasure and not for work.

Everyone has a different way of approaching vehicle needs and much of it is tied into our other expenditures and income levels as well as insurance costs.  What about you dear reader? Do you have a car which you really love? Are you the type that splashes out on top model cars, leased cars or used cars?  Or do you buy a new car and repair until it is no longer feasible?

It's been that kind of day trying to get odd jobs done. Besides the car repairs, I needed to call the telephone company and try to get a deal on my internet and television needs. My contract expired one month ago. I spent an hours on the phone talking with two different people and we were about 2/3 finished when the call ended. The representative called me back while I was trying to call her. She said she could hear me but I couldn't hear her. So frustrating as that is time lost and I will have to explain it all and listen to someone else try to explain their complicated pricing and discounts again.

At least one thing went as planned today. I baked a ham the other day and saved a bunch for soup.  Today I made ham and lentil soup to go with the home made French bread I made last night. This is the second time I've made French bread in the last week. After this bread is gone that will be it for the bread making for awhile. I eat too much of it. 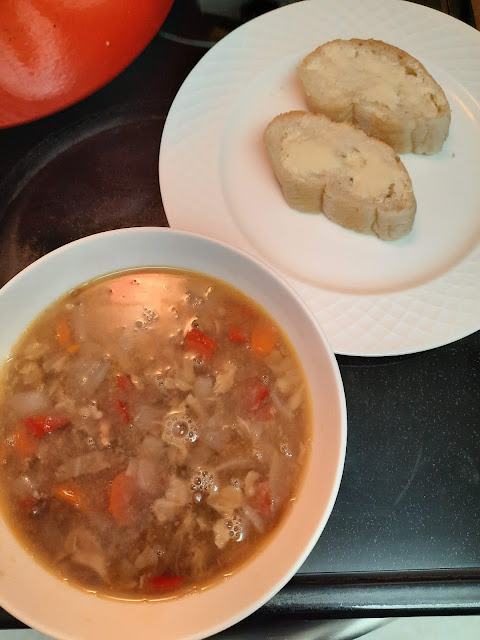 The soup was just right. Not too salty and I put cabbage and red pepper in it to use up leftover veggies.  Normally I only put onions, celery, carrots and potatoes.

I wrote before about a backpack my nephew bought me when we travelled to Paris together. I have enjoyed using the backpack a lot but a strap broke off on the weekend. I took the pack apart so I could restitch it and discovered my sewing machine will not sew through the thickness of 4 layers. I now need to find a seamstress with an industrial machine or a shoe cobbler. I prefer to find a seamstress.  The last cobbler I went to charged me $40 Canadian to sew a few stitches in 4 different straps. I can do it all myself if I just had the right equipment. 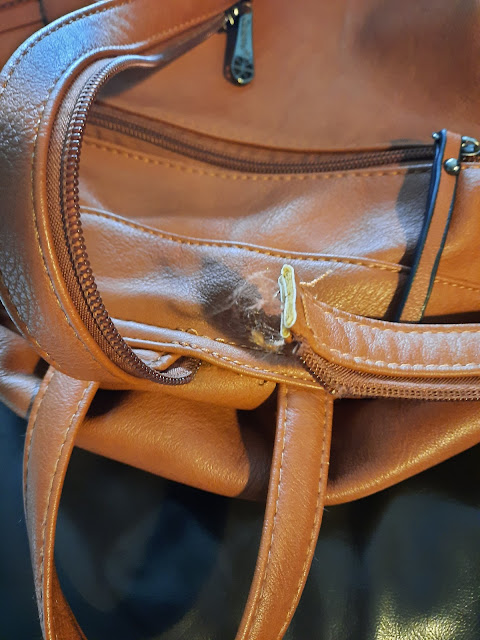 I hope all is well with you and life is treating you well. In my corner of the world I will be keeping busy trying to get things done. It seems like never ending list of things to do.

Bye for now and stay safe.

Update:  I found a seamstress who will reattach both straps, sew the opening on the inside and reattach the binding. She will do it for $21. Canadian and have it ready on Friday afternoon. I thought it was a fair deal as it saves me from running around trying to find someone to do it at a fair price and someone who will do it quickly. It also saves me dealing with 'fiddly work'.  I use this backpack daily when I go out so I would like it soon. It reminded me that I have a cross body purse that also needs repair so I'll have to get that done and have it as my back up. I have a lot of bags of various kinds but few purses with straps that will allow me to go about 'hands free'.