- May 22, 2011
I spent a fruitful and fun weekend.  It is my birthday weekend. Normally I am not even home when I have my birthday so it was nice just to do things I don't normally get to do.  It was raining but that didn't stop me.

The first stop was Dressew on Hastings and the Army & Navy Store. I was on a shopping expedition for stretchy knit jersey fabric to make my mom some plain coloured skirts to wear this summer. I found just what I needed and the sales lady was very nice and helpful. I got served and assisted and my fabric cut in no time at all.  This was delightful considering how some of the reviews (which you can read by clicking the link above) would have you believe that the service in this shop is terrible. Now I just  need to find some time to make the skirts. I also had a great chat with another shopper and found out we share an interest in sponsoring children in Kenya. She sponsors hers through SOS Village and I sponsor mine through Compassion International Canada's office.

As I was walking from Dressew to Army & Navy, I could not believe my eyes and my luck. I turned my head at the first corner and recognized a woman I have been trying to find for years. I don't even know her name but I know that she makes and sells hats. I bought one from her years ago at a Garden Show and I've since lost it and needed another one. I stopped to talk to her and sure enough it was the woman I've been looking for. How fortuitous. I gave thanks to God because truly he knows how I've been searching for this woman for such a long time.  It turns out she doesn't even live in the city anymore!  She was only here to sell her hats at  a local Farmer's Market. She gave me her card and told me I could drop by the next day.  I was thrilled.

I carried on to Army & Navy and was happy to find a suitable pillow there but not a suitable sofa cover. Sofa covers are not so readily available here in my city so I'm thinking maybe I should order it online instead. However that will have to wait because Canada may be having a postal strike as soon as Wednesday of this coming week. While there I was getting hungry so I stopped at their small lunch counter for a grilled cheese sandwich. The young woman who served me started to chat with me about the "end of the world". I told her I didn't believe that the day would bring the end of the world because the bible says "No man knows".


But of that day and hour knoweth no man, no, not the angels of heaven, but my Father only.
Matthew 24:36
Then I told her that the Bible does give a hint as to the end of the world and I asked her if she wanted to know what it is.  She said "yes". I told her that the Bible says the gospel will be preached to every nation and then the end of the world will come (Matthew 24:14).  I let her know that there are groups that monitor the number of  unreached people groups  and that the Lord will come like a thief in the night (1 Thessalonians 5:2).  I said that the end of the world was not likely May 21st but it seems to be coming soon.  I gave a silent prayer of  thanks to God for giving me an opportunity to share what the Bible actually does say given that there is so much misinformation out there from people who claim to know the gospel.

After my shopping and a stop for a sandwich, I made my way to Chinatown and the International Village to take in a movie called Water for Elephants. I enjoyed it immensely though there were some very harsh scenes of violence toward animals and people. It was very well done and I think very realistic about what times must have been like for a struggling circus during the Great Depression.

Here is the beautiful Millennium Gate in Chinatown. 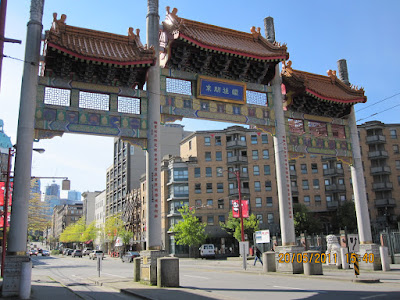 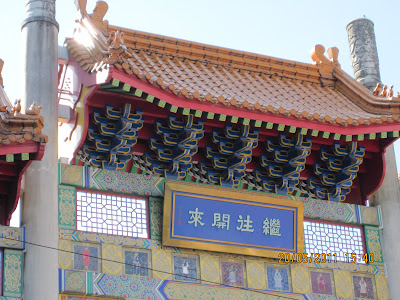 The 'China Gate' on Pender Street was donated to the City of Vancouver by the Government of the People's Republic of China following the Expo 86 world's fair, where it was on display. After being displayed for almost 20 years at its current location, the Gate was re-built and received a major renovated facade employing stone and steel. Funding for this renovation came through some government and private support; the renovated gate had its unveiling during the October 2005 visit of Guangdong governor Huang Huahua.

I think the gate is a beautiful addition to the City and really captures the essence of this part of town. 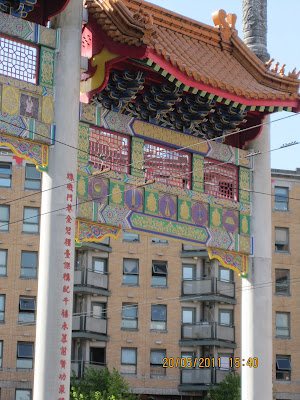 On Saturday I was up late as I had stayed up very late. My first stop was at the Farmer's Market at Trout Lake in Vancouver. I was on my way to buy a hat.  I needed a new summer hat and since it was raining I decided to buy a rain hat too! I forgot all about taking photos of the lake which is a pity since I don't get to the lake very often and I wanted to show you photos of this little treasure in the city. Hopefully I will get there again this summer and I will show you then. I did take photos of my hats for you. I was blessed because the hat maker gave me the summer hat for $10.00 off as a repeat customer. I was also pleased because the hat was already $10.00 less than when I bought it many years ago so that was a $20.00 savings on the hat.


After that I made my way to Commercial Drive where I had Chinese food and stopped at various stores.

I stopped in at Design Dreams to buy kapok to refill some of my sofa cushions. Unfortunately the shop doesn't sell kapok anymore but the nice young man who worked there gave me some ideas as to how to fluff up my pillows.  I also discovered that the store now sells buckwheat.  That is good to know because my buckwheat pillows need to have the buckwheat replaced.  I will have to go back there when I have more time to work on the pillows.

I stopped at one store that sells international goods and purchased an animal print shawl. I then went on to a thrift store that I haven't been to for many years. On my way I stopped to ask for directions and talk to a young mom with her baby. It turns out that the woman moved here with her husband from Switzerland and while we both waited for the bus we had a very nice chat.  At the thrift store, I bought some Croc type shoes for $2.99 and two books, one was Anna Karenina for $1.99.  The shoes and the book are in perfect condition and haven't been used.  Again, I felt very blessed because the two paperback books are actually $4.50 each but the sales clerk gave them to me for $1.99 each.

I spent more this weekend than I have in a long time but all in all I needed these items and I am happy. I thoroughly enjoyed the weekend and today the rain continues so I am staying inside to catch up on a knitted dishcloth in a new to me, pattern.