An Evening to Remember

I was privileged to attend one of the very few Soweto Gospel Choir performances in Canada during the choir's current touring schedule.  The choir is only playing 4 dates in Canada and it performed in Vancouver this past Saturday, April 7, 2012.


I haven't attended a concert  by this choir before so once I purchased my ticket, I immediately went on line to find out what I could about the choir, it's members and music. What I learned inspired me. I was delighted to learn of the community spirit which these choir members have and how much they give back.  Not only to their own communities, but also to the communities where they perform.

On the night of the performance I got to the concert venue about a half hour early only to be met with a terrifically long line up.  The long line of people was at a standstill and it only grew longer over the next 15 minutes or so.  I finally decided to see what the hold up was and discovered that the theatre doors were actually open.  The lack of people moving into the venue even though many of them had their tickets really puzzled me, but I did not wait around. I quickly made my way into the theatre and found my seat.


Once I settled in it turned out that there would be a longer wait.  At 15 minutes past the concert start time, a choir member came out to thank us for our patience and announce that concert was delayed due to the overwhelming demand for tickets.  We were told that the concert would get underway shortly.  Another 15 minutes went by and a representative of the local concert promoter, Caravan World Rhythms came out because the crowd started to clap to indicate they wanted the concert to get underway.  He let us know that the reason for the delay was the last minute nature of Vancouverites in purchasing their tickets causing a back up at the door.   Immediately after that, the concert got underway.  I felt badly for the choir members who were ready to go but were held up by the tardiness of their audience.   I do hope that next time concert goers would prepare properly and make sure they get their tickets on time. It is only common courtesy to the other paying members and to the performers,  though I realize that time pressures are always an issue in this day and age.

The anticipation of the musical extravaganza that awaited had only grown with the wait and the choir did not disappoint! All I can say is that this group is fantastic!!! They really gave their all in the concert and they have such exuberance and professionalism in the performance also.  The members of the choir are all so talented vocally and physically, and each of them have their own strengths which become evident when you watch and listen.

Before I even got to the concert, I have to say I already had my favourite choir member picked out through watching YouTube videos.  His name is Shimmy Jitane and he is my favourite for many reasons.  When he dances, he has such high energy that I would say he is like an“energizer bunny”.  You really have to see him to see what I mean.  Shimmy is also very comical and I found it really breaks the "tension" that can exist between performers and audience while everyone is settling into the rhythm of the evening. Most of all, Shimmy sings with the voice of an angel. I first heard him sing solo on the YouTube video,“I Bid You Goodnight”. After that I knew that he has a very special gift. Seeing him live made me appreciate just what a talented performer he really is. He is giving his all for practically every minute of the concert.

But also the rest of the choir really showed me just how great they are too.  I was blessed to have a seat very close to the stage and so I had the full impact of the show.  It was a visual and sensory feast. Fabulous costumes inspired by the flora and fauna of Africa, are worn by the beautiful and graceful women. The men look pretty good too in their African themed shirts and vests.  They are also fantastically athletic and it was thrilling to watch them dance and kick their heads high above their heads to the cheers of the audience.  Each of the men and women are gifted in voice too and it was great to hear so many of them in solo performances.

The first part of the thrilling show went quickly by and then it was time for intermission.  The charity of choice was World Vision Canada and audience members were encouraged to consider sponsoring a child during the break.  Those that took up the challenge were rewarded with a free CD of the Soweto Gospel Choir's music. I can't say enough about the choir's generosity toward their fellow human beings.


At intermission, I rushed out to the lobby to purchase a CD since I already sponsor several children through Compassion International Canada.  I actually wanted a DVD but didn't have the cash on me. When I tried to use the ATM, it did not provide the needed cash. Sadly,  I was not the only person with this problem. Thankfully I had just enough cash to purchase at least one CD.  Since I am not so familiar with the different songs by name,  I  purchased the CD called "African Spirit".  I'm sure it will be fantastic.

When the performers returned for the second part of the concert, I could feel the energy in the room was ramped up.  The choir was really firing up the audience with their energy and vocals.  This was especially evident when the choir performed a hauntingly beautiful rendition of Sarah MacLaughlin's “In The Arms of an Angel”. The audience went wild and gave the group a long and well deserved standing ovation. I was very touched by their rendition of this beautiful song and it brought a tear to my eye. I always remember my dearly departed sister when I hear this song.

After this heartfelt number, the Vancouver crowd finally let loose and showed the choir just exactly how much they were enjoying the performance. I think at that point, the choir members were gratified to know that their efforts to uplift the crowd had truly worked.  The choir's finale was really high energy and electrifying.  There was so much joy and love in the room.  Still singing, several of the members, including Shimmy, began coming to the edge of the stage to shake hands with the people standing there.

I was initially a little too shy to go forward but in the end I ran to the stage to make sure I shook Shimmy's hand.  I am so glad I was able to connect with a brother and to hear him say “God Bless” at the same time I was asking God's blessing on him.  As the choir and musicians sounded their last notes you could see that the crowd did not want the concert to end.  But alas all good things must come to an end.  The choir had given their all and they now had to leave.

We were not supposed to take photos but as the concert was concluding I simply had to try and photograph the beautiful costumes and get a remembrance photo of the night.  I hurriedly snapped the photo below and was gratified to see it turned out reasonably well.


It was a night I shall not soon forget.  But it wasn't over quite yet.  I made my way to the lobby and several of the female performers were there meeting and greeting people.  Too many people for me to wait so I kept on going. To my surprise, I found  and met Jehoschefatt Fata (Jeho).  It was a real pleasure to meet this beautiful woman.  I could sense that Jeho is a quiet, reserved person (which she confirms on the Soweto Gospel Fan site) but she is such a gracious woman. 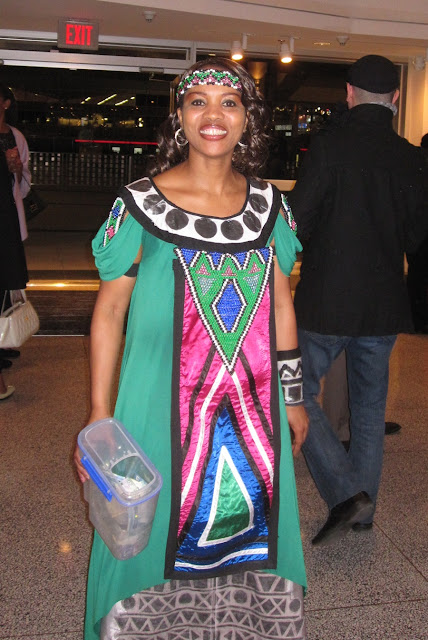 Upon arriving home, I posted Jeho's photo on Twit Pic and let the people know just how much I appreciated the Soweto Gospel Choir's Vancouver concert.

I am now following Jeho and her fellow choir member, Thembisa Khuzwayo, on Twitter.  Thembisa is the woman with a smile so bright that it lights up the whole room.  Like Jeho, she also has a lot of charisma and stage presence.  These dear ladies and Shimmy Jitane, blessed me so much on Saturday.  I was looking forward to a great concert and having that "personal touch" made it that much more special.  These choir members and their fellow choir members, are truly wonderful ambassadors for the country of South Africa.  I do hope they will continue to keep their humble spirits and down to earth approach to meeting their fans. I believe they will as they have already achieved enormous success in worldly terms.

I would like to end this post by encouraging my readers to attend a concert by this fabulous choir if they get to your city.  You won't regret it and not only will you be supporting them and uplifting your spirit at the same time.  You will also be helping all the charities that they connect with and support.  The Canadian leg of their tour ends April 9th in Edmonton.  The last performance in the North American tour ends in Los Angeles on April 11, 2012.  In the new year, there will be an extensive tour in The Netherlands.

Click here to visit Our World Tuesday
and see what else people are up to in this fascinating world of ours.
at April 08, 2012