It has been awhile since I wrote of the outreach to the humble villagers in Kenya. You can read more about our plans for Christmas Outreach here. Photo credits:  All photos in this post belong to Jonah of Missions of Hope, Kenya

The outreach was a modest effort funded by myself and one other blogging friend.  In Kenya, my friends donated their time and energy to helping identify costs, shopping for all the refreshments and food, travelling to the Internally Displaced People's Camp and otherwise making it all happen.

I just want to say that  my friends and I do not do good works while thinking of a reward in Heaven some day (scripture verse in above photo). We do it because we love people and hate to see them suffering.  The scripture teaches that whoever does not love does not know God for God is love  (1 John 4:8). The scripture is also clear that there is a reward some day for those that are God's disciples and do his will as in Matthew 10:42.  When that day comes I certainly won't be turning any reward away if there is indeed one coming. Life in eternity is an awful long time *smile.

I recognize that there are also good people in the world of other faiths and some who have no religious affiliation whatsoever. I applaud you if you are a person who cares for your fellow man, woman and child regardless of the faith issue. Life would be so much better for more people on earth if we all had this view. Now more about the outreach itself and the context within which it was undertaken.

Though our efforts were modest compared to many ministries around the globe, I know for certain that the people we helped would not have received help from any where else.  It was important for me to let them
know that especially at Christmas, someone was remembering them.

Life is very hard in much of Kenya.  Things were already very difficult before the global recession and rise in terrorist attacks.  Both of these events have put the country's economy in a downward tilt and negatively affected the tourist industry which formerly brought in a lot of money to the Kenyan economy.Though there are many, many rich people in Kenya, there are many, many more who not have adequate food, clothing, shelter and medical care.

There are about 46 percent of Kenyans living below the poverty line and there isn't enough work for those who want to work.  Last Fall, I read that university graduates take upwards of 5 years to find work upon graduation. Even then they get meager pay and often have to eke out a living with small businesses they create themselves.  There isn't a robust social security system either though slowly, slowly the government is implementing a few social programs.  These are primarily for young school children to have free education, a real God send and change from several years ago, and for some of the elderly who receive a small pension. The pension program started as a trial about one year ago and I hear is now going to be implemented on a broader basis. These are all starts in the right direction.

The government simply doesn't have the money to broaden it's efforts to include a wide range of social programming.   They are currently trying to improve things on a number of fronts: building better infrastructure, dealing with graft & corruption, including within government, coping with terrorism and the weak economy.  The tourist industry has had a very tough time of things since 2008.  The government is also spending a lot of time trying to better contain the government's budgets in a time of devolution to county governments.  They also appear to be dealing with various land scandals that impact on the security of land tenure for individuals, school and such like.  When citizens and businesses of any country don't have secure land tenure it affects support for their governments and Kenya is no exception.  There are many challenges in trying to move forward

There have also been recent change to the operation of Non-Government Organizations (NGOs). There are thousands of NGOs in Kenya and many of those are run by foreigners from all around the globe.   To date most of them seem to have operated without full accountability though certainly not all of them.  For example, lots of them do not keep up their filing of annual statements.  The government has become concerned about some NGOs being a front for terrorist sponsored activities.  As a result the government recently froze the bank accounts of a multitude of NGOs and a time line for rectifying irregularities. I don't know exactly how this all transpired but it seems a large number of  bank accounts have been not only been frozen but seized by the government in it's recent crackdown on non-compliant NGOs.  The ramifications of this action are still too early to assess.

I sincerely hope all these actions will benefit people on the ground and that graft and corruption whoever commits it will ultimately be controlled. In the meantime, there is still much work to be done to help our brothers and sisters in Kenya.

These pictures show my very small efforts toward doing just that. I want to acknowledge and thank all those of my readers who have contributed both financially and through prayer support to helping Kenyans.  Your  contributions are not in vain.

In 2014, we had a multi-pronged approach to Christmas outreach.  We wanted to feed or have a small party for as many orphans, villagers, and Internally Displaced Peoples as we could.  Despite our modest means we were able to do just that.

Friends, one thing I want you to notice is that there are very few, if any smiles on the faces of these people.  Instead what you see are faced lined with hardship.  It pains me to see people with such hardship.  Life is just that difficult in many places in Kenya. Even when you have an outreach, people take it very seriously lest they miss out on their one chance to get something to eat or drink. I am not being dramatic here folks, I am simply stating the facts of life if you are a poor person in Kenya.  One thing that saddened me very greatly and in fact distressed me when I've travelled to Kenya is the blatant disparity between those that work in NGOs that serve the poor and the poor themselves when there are so  many poor who have nothing to eat.  But that is another matter for another day.

Some of the people who are getting the restaurant meal are homeless or orphans. My friends organized those they thought needed a blessing.  You can see a mother and several children as well as some orphans. 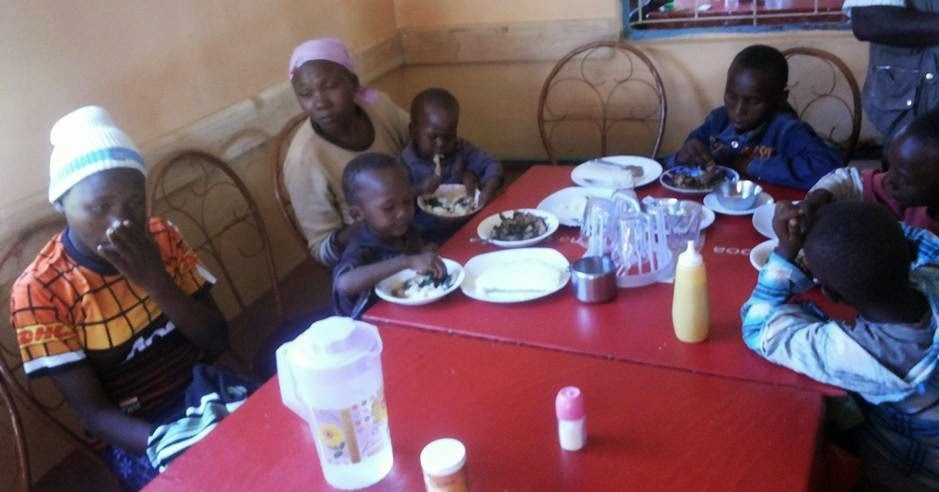 We also had a food distribution at a one of the village churches I had the pleasure of attending when I was in Kenya. My friends wanted to host a bit of  party with biscuits and sodas.  Just a simple affair to contain the costs.  Though they tried hard to keep the plans quiet until the day of the party some other local churches got wind of it.  Many more people came out than anticipated.  My friends did not have the heart to turn them away; especially the children.

Initially sodas were provided because this is a rare treat for people in the village.  It quickly became apparent that a new strategy had to be employed in order to contain the budget and sodas were replaced with juices. My friends also rightly assessed that it was too difficult to keep track of all the soda bottles with so many people in attendance.  Soda bottles all have to be recovered and returned to the vendor.  With such a crowd of people, it was too difficult to make sure the bottles could be recovered. 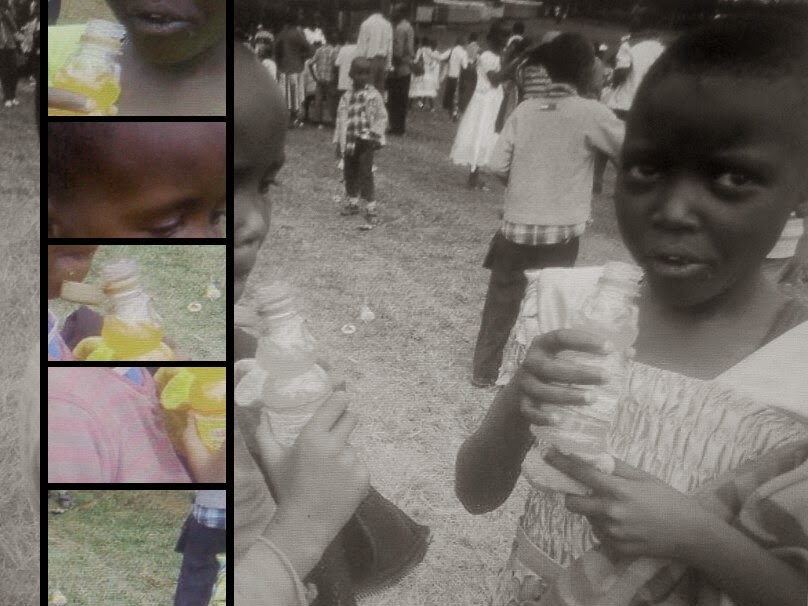 Every year my friends like to help a small group of largely forgotten internally displaced peoples (IDPs).  This year they especially wanted to provide sanitary napkins to the women.  Environmentally friendly napkins or reusable ones were not an option because of the lack of washing facilities where the IDPs live.

We were able to provide a very small amount of refreshment and dried foods like flour to make chapati, in  addition to providing sanitary napkins At other times of the year, whenever we can, we try to do a special food run to these people but it is difficult to do unless we get extra donations because there are a few hundred people at the camp. They need food all year round as they have lost everything: homes, jobs, land, etc. when they had to flee for their safety during the post -election violence in 2007. Many are still displaced and waiting for compensation or relocation. 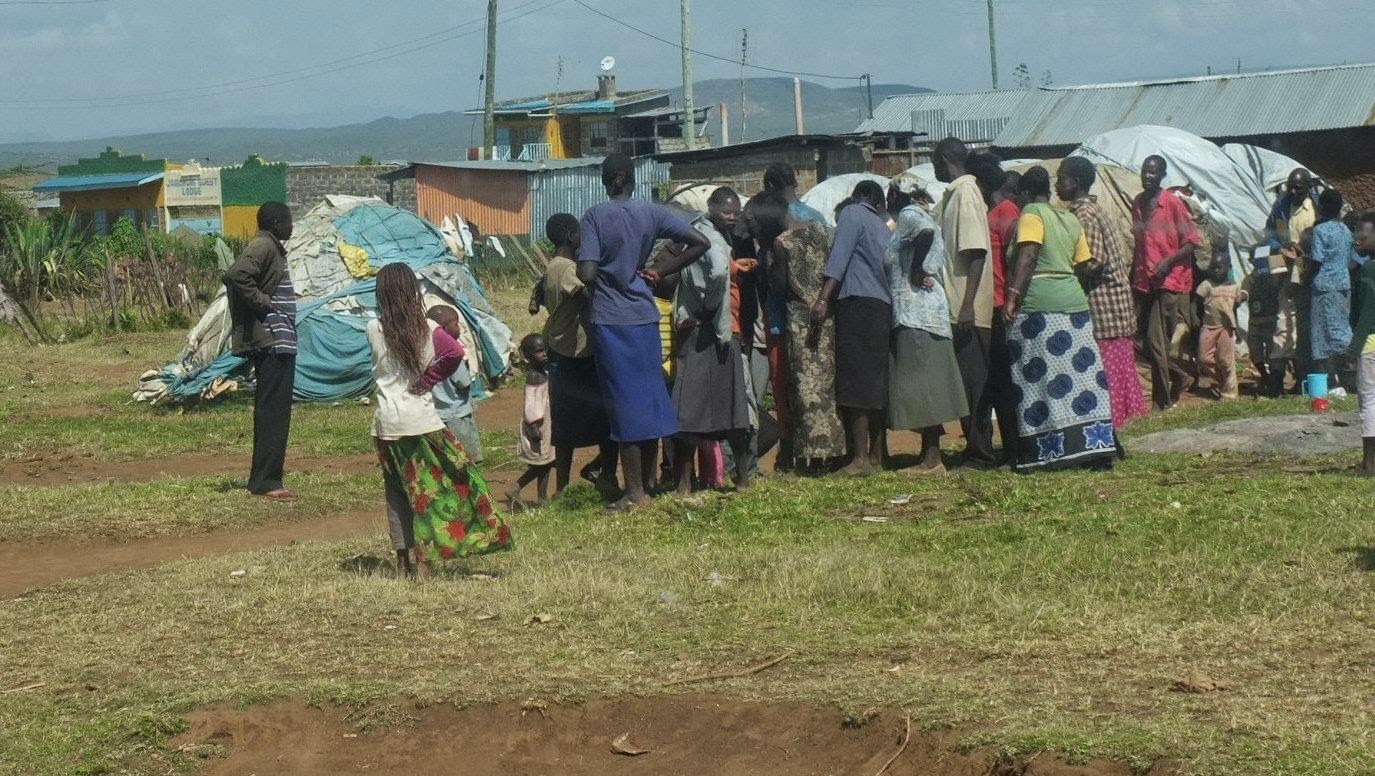 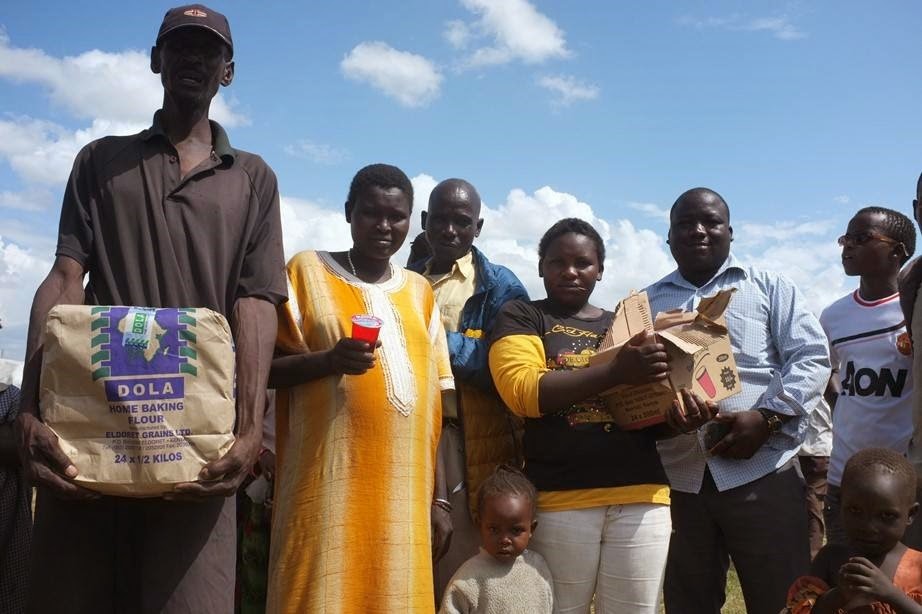 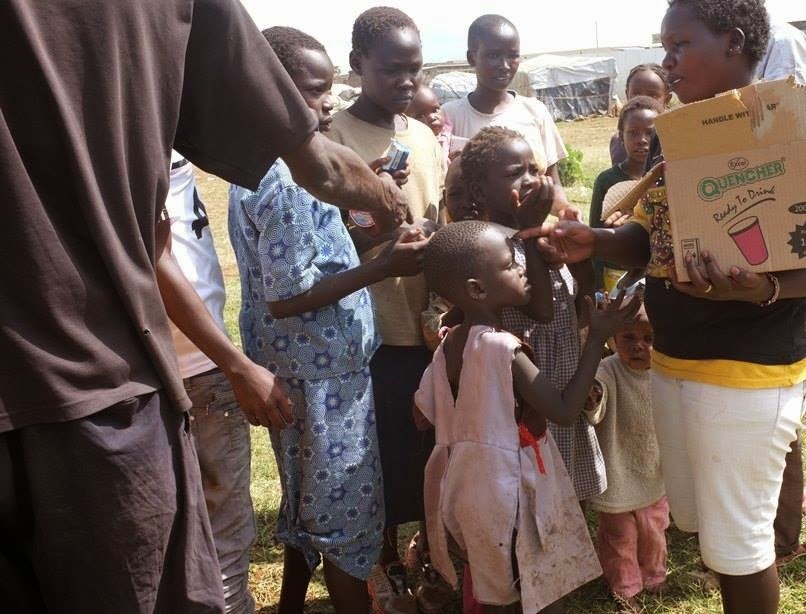 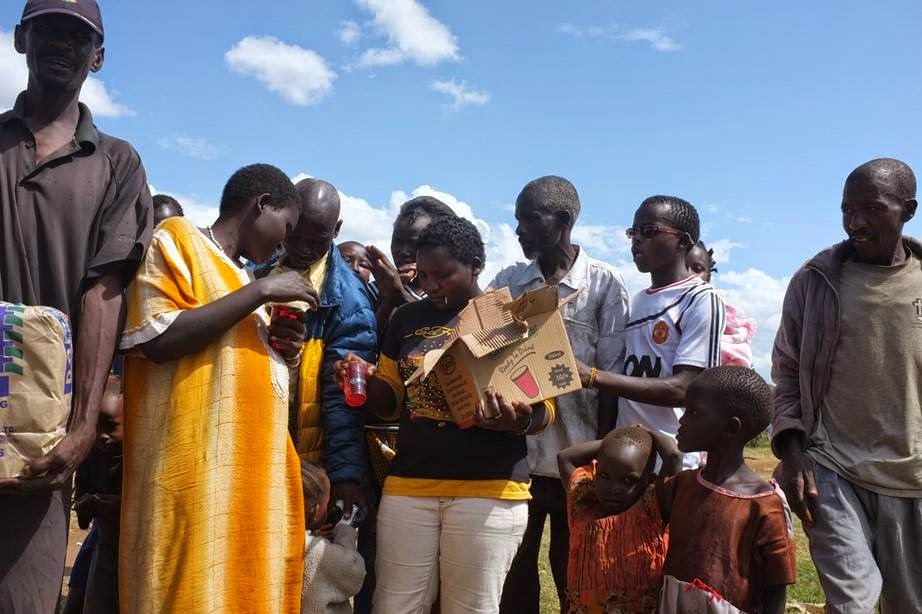 We didn't have quite enough funds to provide sanitary pads for the women for a 3 month period. My friends did very well to purchase wholesale supplies and thus and were able to stretch the funds. 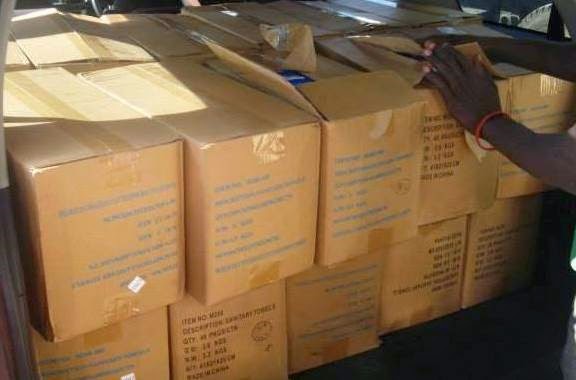 That is just the daily reality of so many people in Kenya. Not just in IDP camps but also in villages all across the nation. 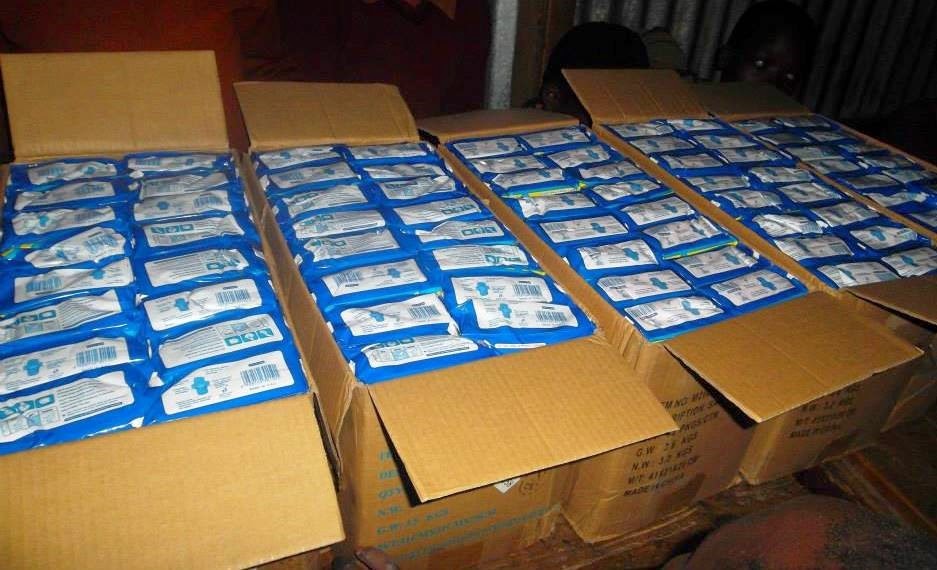 That concludes Christmas outreach for another year.

If any of you wish to have more information or want to donate to future endeavours then please do not hesitate to be in touch.