I hope this day finds you and your loved ones and friends doing well wherever you may be in the world.

It has been awhile since I shared a recipe so I'm posting a "new to me" recipe that I made in the pressure cooker. I didn't think to take photos until after almost everything was eaten! So this photos isn't the best presentation you will get.

I found this recipe on the website Serious Eats here. If you go there you will find a much nicer presentation of the dish and the full recipe. I am also copying the recipe here for your easy reference.

As always I made some modifications to the recipe. I didn't have coriander (even though I'm sure I purchased some earlier for such a time as this, I cannot find it). I also didn't have spinach so I substituted rainbow Swiss chard. Last ingredient I was missing was cilantro. It didn't harm my dish but if you like cilantro I think it adds a nice, fresh flavour.

Another modification is I used dried chickpeas. I cooked them for about 15 minutes in the pressure cooker as I didn't want them over done in the dish. That was a mistake for the dish had to be cooked for an extra 30 minutes or so just to get the chick peas soft enough. 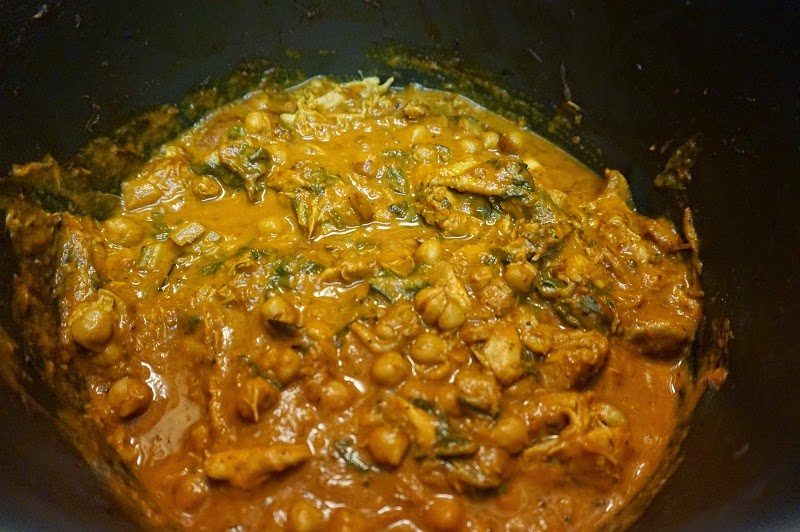 Review:  This dish is quite good and very filling. It has healthy ingredients like chick peas, swiss chard and various spices. I try to eat chick peas whenever I can as a source of protein, fibre, vitamin B-6, iron and magnesium.

This dish is also a bit rich due to the whipping cream which is used as a thickening agent. I ate this chicken and chickpea masala over top of plain boiled potatoes.  It helped to cut the "richness".  You could also use rice, cous cous or yams.  I will definitely make this dish again but next time I will cook the chickpeas well done or used canned as called for in the recipe. On a final note, I noticed that the dish as pictured above looks like it is swimming in grease. That is probably the overhead lighting.  The dish wasn't greasy looking when I took the lid off the pot or when I spooned it into my dish.