- April 12, 2012
I've started a beginner's class in Kiswahili. Although there are probably a lot of Kiswahili speakers where I live, I've never come across any Kiswahili language classes in my city.  But in the wee hours of Tuesday morning someone sent me a notice about the class. Next day I called the office  about registration and found myself in my first class at 6:30 p.m.the same day! I don't generally make decisions that quickly but I have been wanting to take such a class for a long while and I didn't want to miss this opportunity which won't come again until the Fall 2012.

The class is being offered by a local Non-Government Organization (NGO), or as we call it here, a non-profit society (NPS), that does charitable work in various countries in Africa.  Though the NPS doesn't appear to be working in Kenya, the languages classes are taught by Kenyans.

The class was full and most of the students were young people fresh out of university or still in university. In fact, we had one grade 9 student also.  Many of the students have travelled to different countries where Kiswahili is spoken,like Rwanda, Uganda, Tanzania and Kenya. Some of them have Kiswahili parents but don't speak the language. One young woman said she worked for an NGO and lived and worked in Tanzania.  She wants to keep up her language skills.  I personally thought she belonged in the Intermediate class but of course it is her decision where she chooses to register. However, I've been in classes before where one student is not a beginner like everyone else. It gets irritating when they obviously already know the answers to everything while others of us struggle along. Who knows before the class is over, I may ask her to be my private tutor, lol. 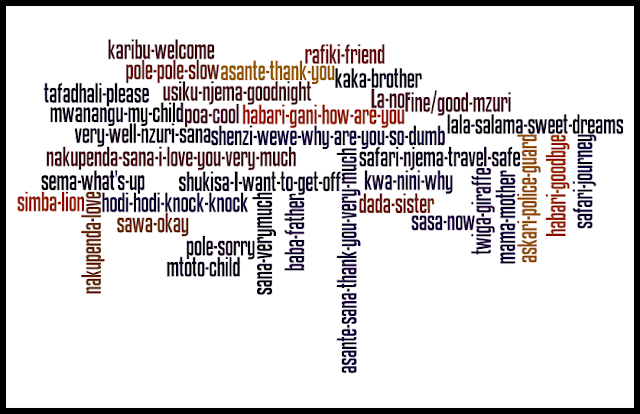 I liked the idea of creating a "Joy Cloud" so much  (see my eaarlier post from today) that I've made a Kiswahili word cloud, using some of the basic vocabulary I picked up in the first class. Don't worry though, I won't be posting word clouds every day, lol.

We covered a lot more than what I've put into the word cloud but phrases and sentences don't work so well in the wordle program.  That is why you see my short phrases with hyphens between words.

I'm thinking these word clouds might help me practice and retain the vocabulary.  I find I can pick up vocabulary fairly easily, especially if someone says the words for me first, and I can repeat after them.  However my problem is retaining what I've picked up. I would probably do much better immersed in the language and if I had one on one instruction on a daily basis. I haven't been able to spend enough time in Kenya at any one time to really learn the language.  I'm hoping this language course will help me make a better start on learning the Kiswahili language.

Our instructor told us that the late Miriam Makeba sang a Swahili song that we could also use to learn some vocabulary in an easy way. I've posted that song for you. It's a Tanzanian song called "Malaika" (My Angel). The video has some very interesting information about Ms. Makeba in the first 2 minutes and 44 seconds of the video.  If you wish to skip that part, you can fast forward the video to the start of the song at 2 minutes and 44 seconds.


"Malaika" was a sad song for me because it speaks to the economic realities of so many people who are poor and want to provide for their would-be intended. I've heard other versions of the song being sung by native Tanzanians. The song sounds much more upbeat but when you know the words, I don't know how it can be an upbeat song.  The only thing I can think of that would make it more upbeat and make sense, is that one has to make the the best of the life they have.  This is probably easier to do when everyone else around them is in more or less the same boat. If any Tanzanian reader has something to say about this song, I'd love to hear it.
Kiswahili lessons Malaiki Miriam Makeba vocabulary word cloud wordle