I don't know about you but when it is very hot outside I find it difficult to know what to eat. Only a few things appeal to me. Greek foods seem to agree with me well in this heat. You might remember I made a Greek dinner a few weeks ago.  It was time for another one.

This time I cooked the potatoes extra long to make sure they were brown. In my oven that takes awhile.

You can find the recipe here

I skipped the oregano spice but made sure to put lots of garlic, lemon juice and oil. 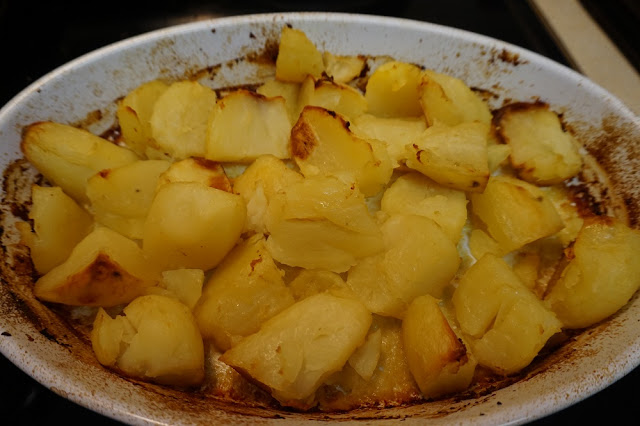 I didn't feel like making kebabs or souvlaki so cubed the pork, marinated it and put it on my indoor grill. It is so quick to cook but you need a bit of time for the marinade to work.

Frugal Tip: Purchase a full boneless pork loin roast and slice into pork chops as well as pork cubes for stir fry, kebabs and marinated cubes (as in photo below). I was able to get a full side of pork loin roast on sale for only $12.  It was a fabulously frugal way to get some nice dinners.

Here is a recipe. Again I skipped the oregano. I do like oregano but I am out of it at the  moment. 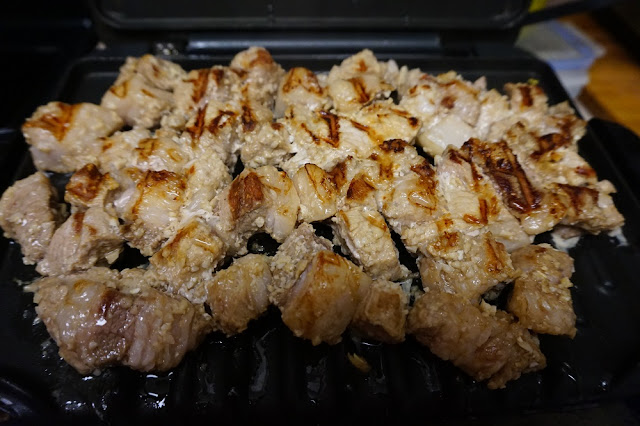 I also made some Greek Tzadziki (Cucumber) Sauce. I didn't have thick yogurt on hand so I strained the whey out of some before I used it. I found it was much runnier (thinner consistency) than last time even though I drained a lot of whey from the yogurt and water from the cucumbers too. You can avoid that problem by buying thicker yogurt or straining yours longer.  I decided to thicken up the sauce by adding a bit of ground up flax seeds.  This not only made it the right consistency but gave me some needed fibre. It didn't affect the taste either.  Here is a recipe for the sauce (minus the flax seeds).

Frugal Tip:  Purchase plain yogurt on sale and strain the whey out using a thin cloth. You can make it to your preferred consistency and save on cost of buying more expensive Greek yogurt. 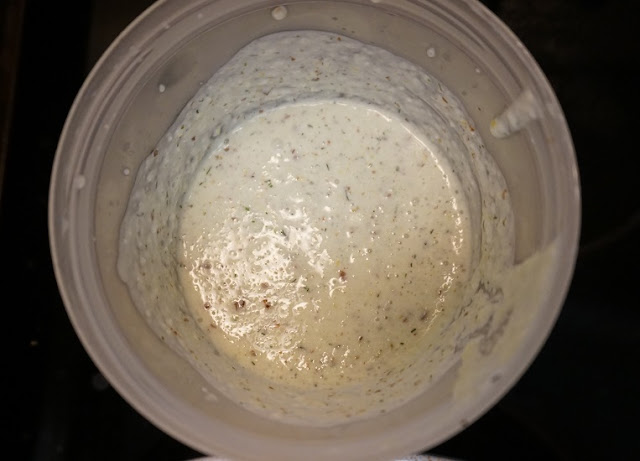 To round out the meal there was some toasted pita bread and leftover green salad from the previous night's dinner. A few cherries for dessert. I love cherries and eat a lot of them during their brief season.

Frugal Tips:  There can be a tremendous gap in pricing at local food markets for fruits in season. Shop around. Prices in my neighbourhood range anywhere from $2.49 per pound to $9.99 per pound for cherries. One week a local grocer might have them on at the highest cost but the next week their cost is lowest. You can save a lot of money just by being willing to go a few blocks more for your treats.  Another tip is to purchase flax seeds whole and grind them yourself as needed. Store both the bag of whole seeds and the ground up seeds in the fridge to keep it from going rancid so quickly due to the oil in the seeds.

As you know I've been mentioning the excessive heat for long but in anticipation of some small rain we are having, it cooled off on Friday and Saturday.
The predicted rain arrived on Saturday but there wasn't a lot of it.
Thunder and lightening storms are predicted for the rest of the province and the fear is the lightening will cause more wild fires.
We already have over 200 fires burning and the cost to the treasury is now in excess of 100 Million Dollars (Canadian).

Sunday (June 11th) called for a bit more rain. It did come down a bit but not a whole lot.

Here is a photo I took on Saturday morning.

Today is Monday and we have a lot of blue in the skies for the first time in a week. The sun is also out in full force and there are a few clouds in the sky.
I may add today's pic later but right now am preparing to green my niece who will arrive within the hour.