A few weeks ago I had the good pleasure of going with a friend to our local central library for an event but haven't had a chance to write about it here.

The occasion was a reading and book launch by local author, Carol Cram. 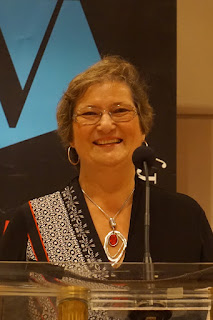 She was launching her latest book, A Woman of Note.

"Virtuoso pianist Isabette Grüber captivates audiences in the salons and concert halls of early nineteenth-century Vienna. Yet in a profession dominated by men, Isabette longs to compose and play her own music—a secret she keeps from both her lascivious manager and her resentful mother. She meets and loves Amelia Mason, a dazzling American singer with her own secrets, and Josef Hauser, an ambitious young composer. But even they cannot fully comprehend the depths of  Isabette’s talent.

Her ambitions come with a price when Isabette embarks on a journey that delicately balances the line between duty and passion. Amid heartbreak and sacrifice, music remains her one constant."

What appealed to me about this launch is that the author was going to give a reading and her brother composed a piece of music which was going to be unveiled especially for the book launch. He is the clarinetist in the photo below and travelled all the way from Halifax, Nova Scotia to Vancouver for the performance.  It's an all day journey by plane across Canada.  What a wonderful brother he must be! 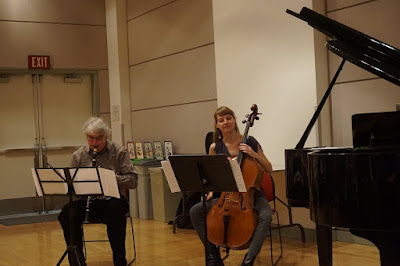 The composition was performed by a trio.  The pianist is hidden from view behind the beautiful piano.  The piece very powerful. While I wouldn't say it was my favourite piece of music it was certainly interesting and enjoyable in many ways.  An unexpected bonus in the program is that the author also played a piano piece which was composed by a little known 19th century woman composer.  The piece was very enjoyable.

Of  course there was an opportunity to purchase the book. I paid my $20 (it is less expensive on line) to the author's husband and the author signed it.  If anyone is interested in purchasing a copy, it is easily available on Amazon in digital and paper paper formats. I haven't started reading it yet but it is in my 'to read' pile. It should be very interesting because I'm intrigued by the the subject matter of women composers in early history since there is so little known about them. The author spent time in Italy reviewing documents as the background research for her book.

~~~~
In other news, I had a chance to visit my mom.
I wanted to go last week but had a cold and didn't want to pass long any germs.
It so happened that there was a major storm last weekend and early week as well as an accident which closed the highway for considerable length of time.  So the delay in travel was a god thing.

There were a lot of things to take on this trip.  Mainly food related items though mom also needed socks and a few other items.

This time mom also requested some fried bread. I made a small batch of it the day before. The best way to eat it is with a bit of butter and jam but you can also use cheese or other spreads or just eat it plain.  This kind of bread has to be eaten when it is relatively fresh so one can't make it too far ahead. 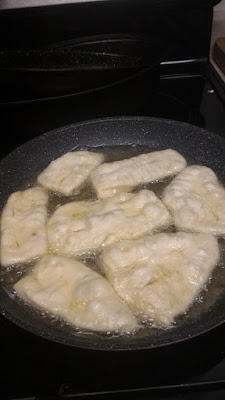 I do not usually fry foods.  But in the case of fried bread, it must be fried. One should also have the grease properly heated so the bread fries very quickly.

I didn't quite have my oil hot enough but after it was done I let it rest on paper towel to absorb the grease. After sampling I realized I didn't put enough salt in it.  That is okay since too much salt is not good and given the jam topping, the salt wouldn't be missed. 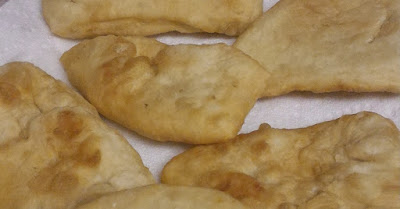 On the day's journey we were met with a dazzling sunrise. The colours were out of this world however the phone camera doesn't really do it justice. The following photos were taken on the highway near the City of Chilliwack. 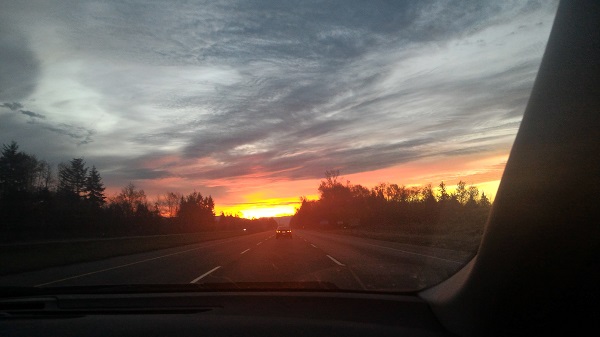 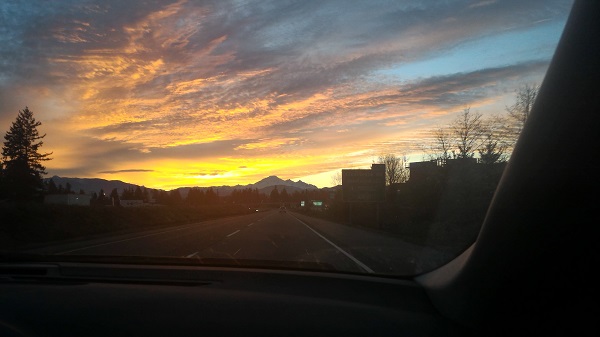 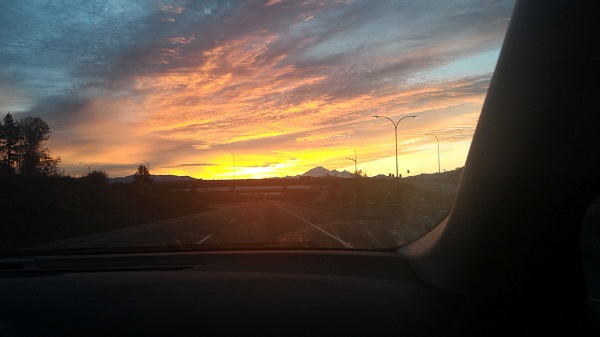 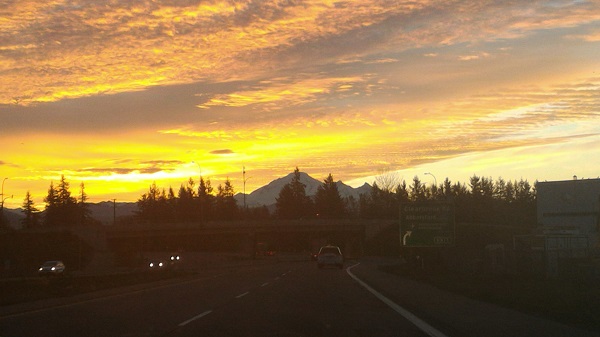 Further along up the mountain highway past the Town of Hope, I captured these clouds above the mountains. I thought they made an interesting pattern. 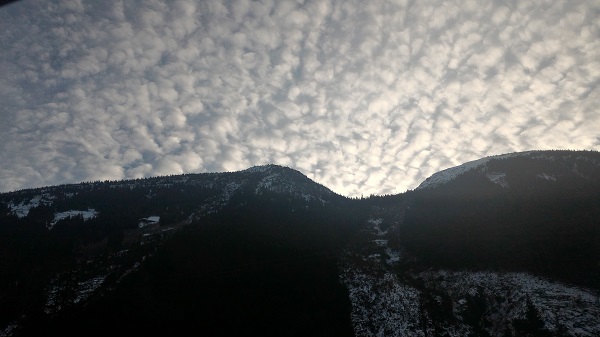 I'm always in awe at the beauty and majesty of the mountains.

We were able to enjoy a beautiful, sunny day for most of the journey. 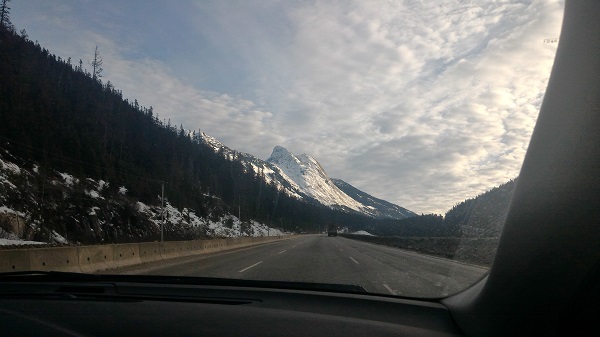 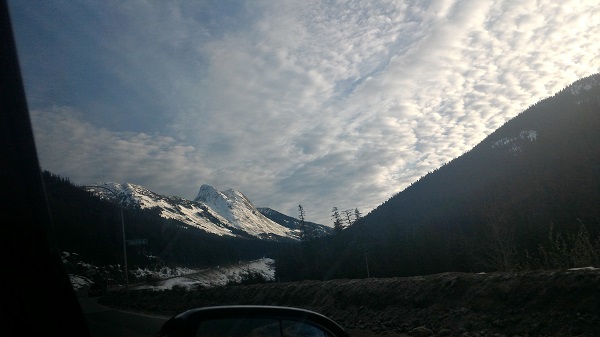 The last photo I'm sharing was taken near the approach to the Town of Merritt on the Coquihalla Highway.
You can see it was starting to cloud over and that it the way it looked for the remainder of the drive (approximately another hour and fifteen minutes). 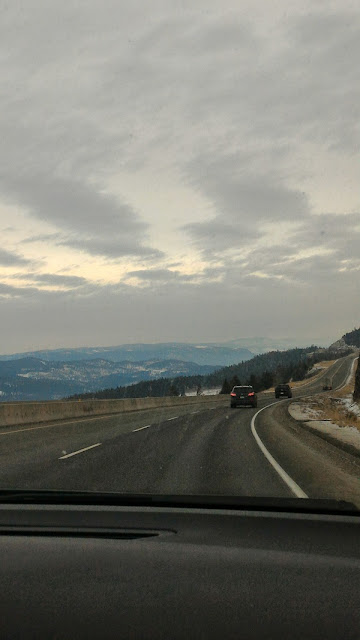 The weather was nice and brisk. Not too cold.
We were also fortunate that road conditions were very good for both legs of the journey.

Thank you for stopping by.
I'll be joining in with Our World Tuesday this week.
Have a terrific week!
at November 23, 2015