Joining in Tuesday 4 Meme today in memory of Toni Taddeo.

1. Are you happy with the way your life is going?

My life is always changing and I do my best to roll with things. Currently I am undergoing major changes due to a new-ish marriage and the fact my husband joined me all the way from Kenya.  We are both adjusting well and Jonah has been very busy with work and studies. We have a lot we hope to do in future and desire that our plans be aligned with God's plans.  We are off to a good start and look forward to more to come. Apart from these major changes, I'm in the midst of trying my hand at home improvements and though I'm slow I'm happy with things so far.  Last but not least, I am taking 2 short courses this fall and so I expect to be even busier from now until Christmas.  Keeping reasonably busy always makes me happy and moving forward.

2. Are you planning any trips in the future?

I had hoped to have a short trip this summer but it didn't happen. I have no specific travel plans in the near future. Instead I've been trying to see things in my city that I've never seen before. A few weeks ago it was going out to different suburbs near and far and spending some time at one of the parks.

This morning, after a seminar I attended downtown, I strolled to the Waterfront stopping along the way at Christ Church Cathedral. I've never been inside the cathedral before and have wanted to do that for quite some time. Today was the day and in addition to touring the cathedral I was able to participate in a prayer service at noon.  I also signed a book of condolences for Her Majesty Queen Elizabeth. There were congregants on hand greeting visitors and they were very welcoming and engaging.

After that I continued my walk down to the Waterfront where I had a late lunch of calamari.  I took some photos from the Pan Pacific Hotel and then continued my walk to Simon Fraser University's downtown campus and one of the few fabric stores in the city, The Dressew.  They didn't have what I was looking for but they kindly pointed me in the right direction.

I was struck by how many tourists there were today.  Many of them struggled with their luggage as they made their way to pick up points to catch a bus to the airport, while others studied their maps and tried to figure out where they were heading. It was lovely to see and hear so many accents today and most of them were from England and India. 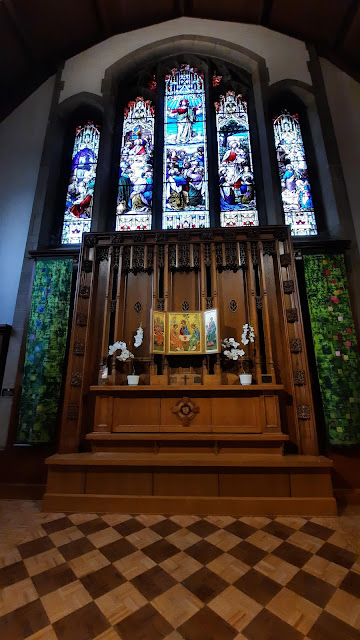 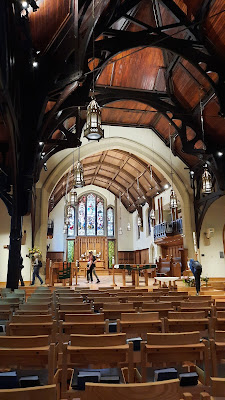 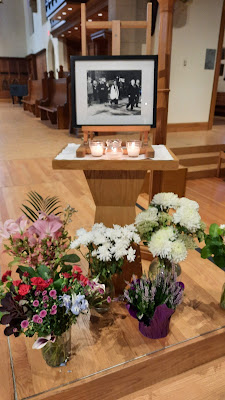 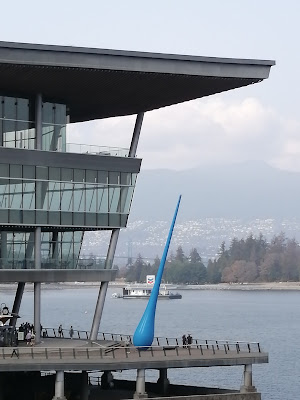 The sky is quite hazy from the wildfires burning all around us including Washington State to the south of us.

I was surprised to see the sun come out. There were a lot of tourists at the waterfront but there was no cruise ship in the harbour today unless it sailed much earlier. 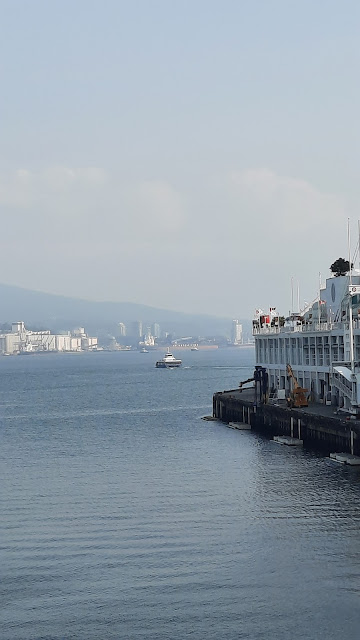 3. Are you reading anything at the moment or do you plan on reading something interesting?

I just completed an interesting book on bees called Bee Time:  Lessons from the Hive, have just started reading Homo Deus: A Brief History of  Tomorrow and awaiting a book from the library entitled The Ten Thousand Doors of January. 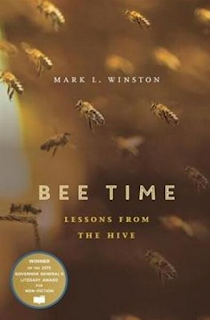 4. What's for supper tonight at your house?

Thanks for stopping by!