As I mentioned in  my last post here, we have not had to supervise Emily and Regina who are making the stoves.  Yet these two women have gone beyond the call of duty, making beautiful stoves and even teaching the other women how to take care of their jikos.

Now the rest of these  photos below will show you the latter phases of the work.  Some of the pictures were taken at night so they are a bit dark but they will more than give you an idea about how well this project has gone.


The majority of stoves were made in Chepkurbet for the village women there and last time I checked in, Emily and Regina were on their third day of stove making for the widows in Anamoi. The balance of stoves will be made in the other villages and altogether this part of the project will see 35 stoves completed. In the first phase of the project which occurred about one and a half years ago, we were able to make 11 jiko stoves.  If you like, you can read more about that here.


We are now able to get to more women and families with the jiko stoves. Not all of the women recipients of the stove are widows. Some of them have husbands. The thing they all have in common is that they need a new stove to help them with the environmental and health risks associated with the three stone fires they had been using. Read more about that here. For humble villagers like these to put in such a stove would be quite costly and also viewed as a luxury item.  While it might be financially doable for some it is likely at the expense or risk of not providing food and education for the children and other family members. Food is a necessity for people who often only get one meal a day and education would be considered far more valuable than a jiko stove.

I want to say one thing about the husbands also. Generally in Kenya, the men do not associate themselves so much with the concerns of the kitchen or the hardships of cooking. These areas of home life fall under the responsibility of women.  Consequently, I was very happy to hear how as a result of this project, some of the husbands are actively engaged and supportive of these new stoves and that they value them as an advantage for their wives and their households. You will see one of the husbands posing in the photos. You can see he is smiling and proud to have a new jiko stove. 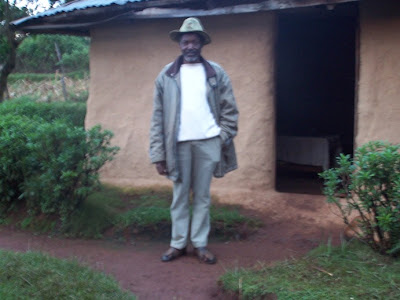 This concludes my series on Phase 2 of the Jiko Stove Project. Phase 3 will happen when I get to Kenya. You can read about that in the weeks to come.
Africa African life Anamoi Chepkurbet Kenya jiko stoves orphans and widows role of village women in Kenya