An Update on the Medical Mercy Mission to Save Kigen's Life

- March 08, 2011
Yesterday I posted a very short update here about little Kigen the boy we met on a mercy mission of food aid to the Pokot.  I then went to sleep and when I awoke I had this comprehensive update from Jonah about how things are progressing with Kigen's care.

As you read the update I think you will be so moved and touched.  You will that God is in this work and He is answering prayer.  I thank each and every one of you,  for your concern for this little boy Kigen and for your part in prayer and giving.

Jonah and little Kigen's family arrived in Eldoret and went straight away to the hospital.


Now here is the update from Jonah.

It is me again just wanting to praise God for His faithfulness.  My heart is now 'free'.  I can now eat a bit as I know Kigen is in the doctor's hands and in God's hands as well.


I also want to thank God for the bag that was donated (blue one in photo) by people in the streets of Eldoret. We had realized that Kigen's mother came on the journey with an old bag, so we decided to buy her a new one.  Instead, it was given to us for free!  In addition, close to 500 Kenyan shillings was donated right there on the streets for this boy and his mum.  God really works wonders.

It was a more touching moment for me as I felt God was telling me "I will take care of this situation" and I felt really that I am just a tool/ instrument to be used for God's purpose.  The doctors too were so kind.  We did not even queue! [If you know Africa, you know what this means].  We were welcome everywhere we went and I must praise God for that.

What is next now is that Kigen was given a dressing up by the doctors and is awaiting surgery (if I understood what they said well).  He will need three practitioners or doctors to be able to treat him.  First will be the one's to deal with the skin (there is a scientific name for it), those to deal with eyes, and another part, I forget but I guess general health. 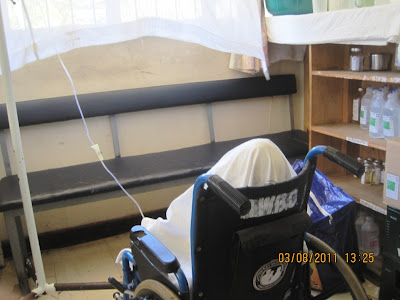 The doctors here were so much touched too with the amount of courage the boy has.  They were saying that they are seeing for the first time, something they were just reading in the books when they were in medical school.

The boy Kigen is upbeat, and he raises our hopes for his health.  His younger  brother too is here with us.  He was not feeling well, too.  So he is here for check up; especially for his eyes.  He kept asking for him [his older brother Kigen] when they were with different practitioners. 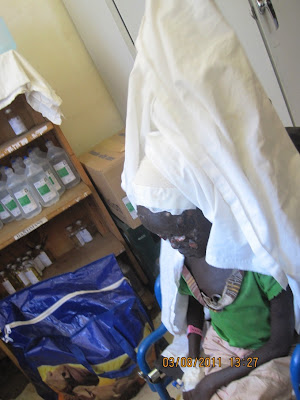 We did mention to him [Kigen] of the many people praying and supporting him for his medical needs.  He said he is so much grateful and "TOROROT: (Pokot for God Bless you abundantly".)

Thanks so much again
Jonah


You can donate to assist in little Kigen's medical mission.
Donations can be made via Pay Pal here. Just click the donate button.

Photo credits:  All photos the property of Jonah at Missions of Hope.
If you wish to share this story, photos may be used with credit. Many thanks and blessings.
charitable giving in Kenya kigen medical mission Missions of Hope My World Tuesday rural Kenya's medical services www.kenyamissionsofhope.org