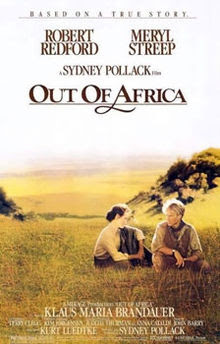 Have any of you seen the movie "Out of Africa"? It was released in 1985 and amazingly it was showing on the big screen in my city last Saturday morning.  I've seen bits and pieces of it on television over the years but I had never seen the movie from start to finish until this past weekend. The movie is based on the book of the same name, and other writing by Karen Blixen.  It is a movie based on Karen's love story and is described in one sentence on a website about movies


In 20th century colonial Kenya, a Danish baroness/plantation owner has a passionate but ultimately doomed love affair with a free-sprited big-game hunter.


What a powerful movie this was on so many levels. On the surface, it is a love story but it is a multi-layered story which is nuanced with so much about the meaning of life, love and loss.

The movie ran at 9:30 a.m. this past Saturday, and though it was open to the public, it apparently is part of a series of movies watched and discussed by local movie buffs.  These "regulars" get an introduction to the movies and a critique afterward and then they go off for lunch to carry on with the discussions.

It was lovely to hear an older woman talk about her thoughts about the  movie and of her journey to Kenya. It was also delightful to hear from an Indian woman who grew up in Kenya but now lives in Vancouver with her husband and children.  She had an especially personal account of the movie.  The director of the movie rented her apartment in Kenya while filming was occurring.  After filming was over, she was left with a copy of the screenplay. She was very emotional in speaking about the movie and her recollections of it because the movie had a powerful ending and people were still emotionally raw.

My friend and I enjoyed the movie so much that we went for our own lunch rather than join with the group luncheon.  However, we have decided to try and join these movie buffs again in the Fall and will likely take in more of the movies and discussions at that time.


What about you dear reader? Have you seen the movie?
What did you think of it?
Have you been to Kenya and how did that affect your viewing of this movie?
Perhaps you live in Kenya and have views you can share about the historical period this movie represents.
Whatever the views of my readers, I'd love to hear them.

Have a good week ahead.

at May 06, 2012
Email ThisBlogThis!Share to TwitterShare to FacebookShare to Pinterest
Labels: Africa, movies, Out of Africa