We've Covered a Lot of Miles

I am back from my recent travels to visit elderly relatives.

You can see the outline of our journey on the map below.  Our northward journey took us north east from Vancouver to Kamloops on Highways 1 and 5. We continued along the route shown by the upper purple coloured line which is primarily along the Yellowhead Highway. The route went through Kamloops, Barriere, Blue River, Valemont and on to Mount Robson at Jasper.  We continued through to Hinton where we stopped for dinner.  After a delicious dinner of calamari and caesar salad at L & W's, we drove on Highway 16 east to Edmonton and spent the night in St. Albert, north west of Edmonton at the St. Albert Inn which was very comfortable.  The room rate was about $117.00 Canadian.  (You can click the link in the previous line, to see the hotel rooms and amenities.)

On Friday, we drove on to a small community near Calais, Alberta, along Highways 43 and 34, where we stayed with my aunt (more about that later). If you click on the map, it will enlarge. Locate Edmonton (about the middle of the map) and move your finger/eye along the line that goes northwest until you get to Valleyview. Calais is the first stop to the west of Valleyview.

On Saturday we journeyed north along Highways 16, 43, 34 and 2, to Hines Creek, Alberta, and visited with my uncle who has recently been diagnosed with colon cancer (more about that later). From there we drove along a secondary road west to the town of Ft. St. John, BC.  There we decided to have a late lunch and skip contacting more relatives to visit.  Instead we drove south on Highways 97 and 2, through a town called Taylor and stopped in the City of Dawson Creek, BC, to visit another uncle.  We then drove back to my aunt's place along Highways 2 and 34, in northern Alberta for one more overnight stay.

Early the next morning we drove back to Edmonton, Alberta, along Highway 43.  There we visited with a third uncle who I haven't seen for about 17 years. I've been wanting to visit him because both he and his wife have suffered a lot of health challenges in recent years and they are in their late 70s so you never know what happens. After visiting for a few hours we made our way south on Highway 2, turning west at Red Deer on a secondary highway.  We made our way to Highway 93 so that we could pass through the town of Rocky Mountain House and travel back to British Columbia through the Rocky Mountains.  We connected in BC with Highway 1 and drove back to Kamloops, passing through the towns of Field, Golden, Revelstoke, Salmon Arm, Sicamous, Chase and then finally Kamloops. We visited mom for several hours and then headed home on Highways 5 and 1 back to Vancouver. I was glad to get home as the long trip over a short period of time always tires me out. 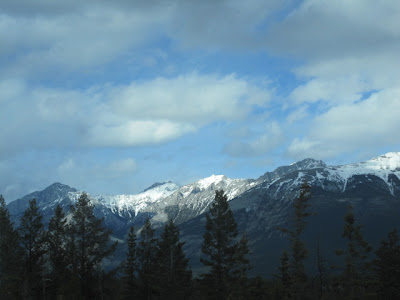 The photos above end in Jasper National Park. The park is one of Canada's oldest and largest national parks.  Established in 1907, Jasper was once seen as an island of civilization in a vast wilderness. More recently, it has become a popular getaway from urban life, and a special place to reconnect with nature.  There are nearly 1000 km of trails in the park, thousands of campsites, tons of wildlife and the largest Dark Sky Preserve on the planet.

Our total travel distance was  2585 miles or 3514 kilometers in 5 days (excluding time spent driving around finding the places we were to visit or doing some shopping).  I will be sharing more scenic photos from other parts of my journey in future posts. Some of them are even more spectacular than those I've shared in this first post.

Click here for Our World Tuesday and more scenic photos from around the world.
at May 16, 2012