When you live in a big city there are always a lot of things going on in which you can participate.  Every year in September things start off with a bang and I find it hard to take in much of what is happening.  September is always a very busy month as I wind down the summer activities and transition to Fall.  This year I got sick early with a cold and that slowed me down a bit also.

There are a number of festivals going on in Vancouver recently.  Here is just a short list:

I couldn't begin to take in most of these fantastic offerings. In fact, I can barely keep track of them. But this year I finally managed to make it to the Vancouver International Film Festival (VIFF), an incredibly popular event with a loyal and dedicated group of followers.

Given my love of Africa I decided to see a film set in Africa.  I don't know which country, but I think that it was somewhere in West Africa. 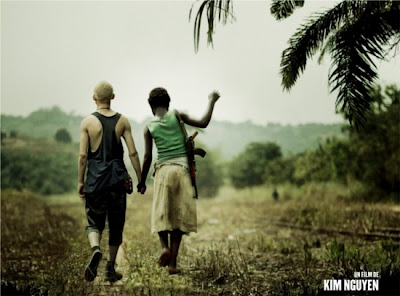 The film is called "Rebelle" and is directed by Kim Nguyen.  The VIFF website provided this short synoposis of the film


I invited 4 other women friends to join me.  The film was powerful and the introduction had me in tears with the horror of the situation.  My friends were also impacted by the film and I think we all  learned something about the issues affecting child soldiers in Africa.

I don't know if you will get a chance to see this film but I've heard that it will be a submission for an Academy Award. If it wins, perhaps there is a greater opportunity for you to catch it in a theatre near you.  In the meantime, you might want to watch the trailer here .